Today’s article is the result of starting out looking for information on one story and ending up telling a different story.  It all started with the birthday of Friedrich Ferdinand Grosse on May 27, 1811.  Ferdinand was one of the original immigrants whose family decided to stay in St. Louis and not move to Perry County…..at least not for a while.  There were three Grosse brothers that came to America with their widowed mother.  All three of them were shoemakers.

I found Ferdinand and his family in the 1850 census in St. Louis, and was rather surprised to see the location where he was living.  He was included with quite a few other folks who were very recognizable to me.  Many of them became important figures in the early history of the Lutheran Church-Missouri Synod.  That’s why today’s title refers to this as “A Census Hall of Fame”.  In order to be able to see this census record clearly, I have chopped it into three images.  Here is the first one.

Rev. C.F.W. Walther and his family are at the top of the list.  By 1850, he and his wife, Emilie (Buenger) Walther, had four living children.  One son of theirs had died from a fatal fall in their home two years before this census was taken.  One more child would be born to this family later.  One of the twins shown in this census, Ferdinand Walther, would go on to become a Lutheran pastor.  A post was written about these twins titled, Maybe They Should Have Been Named Law and Gospel.

In 1850, Rev. Walther was the pastor at Old Trinity Lutheran Church, President of the Lutheran Church-Missouri Synod, and head professor at Concordia Seminary in St. Louis.  In fact, in 1850, a new building had been constructed to house Concordia Seminary on S. Jefferson Avenue, and this census lists all who were living there during that year.  This is a drawing of that building.

The next image show some more residents of this building. 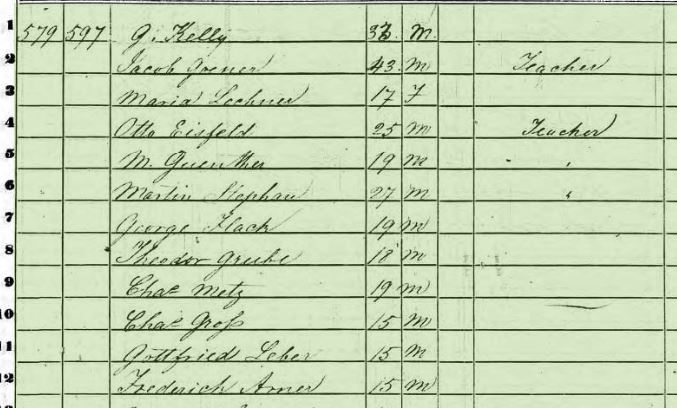 I will attempt to give a brief biography of the people listed here.

Now on to the next image of the census. 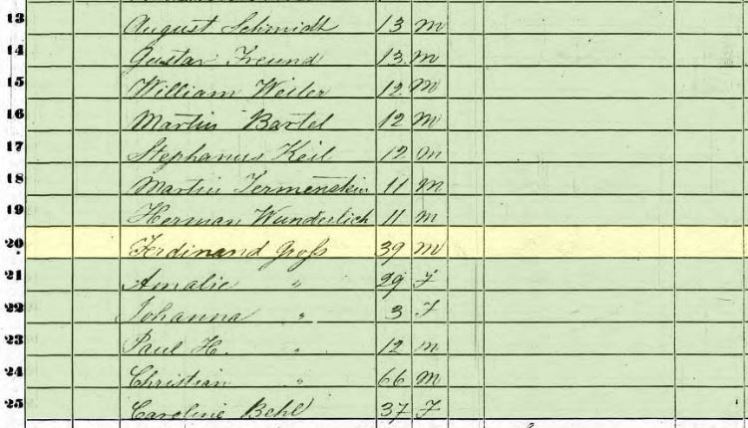 I certainly found this census entry entertaining.  It got my research juices flowing.  It turned out to be a little glimpse into the early history of the Lutheran Church- Missouri Synod.

5 thoughts on “A Census Hall of Fame”