We are part of Cardinal Nation here in the East End of Perry County, and we are in the midst of the baseball season.  This year, we grudgingly admit that we are suffering as we watch the St. Louis Cardinals struggle through their schedule.  They are presently playing the Cincinnati Reds, and they lost another heart breaker last night.  Well, there was once a time when a baseball team around here was known as the Reds…….the Farrar Reds.  Here is a photo taken of that team in 1910.

Make sure you read the caption to this photo.  There are some fascinating facts there.

You could argue the point that this team began to be built when a carpenter in Farrar married his girlfriend on June 6, 1886.  That was the wedding day for Emmanuel Lorenz and Martha Sallee Soehl.  Five of the players in the photo of the Farrar Reds are sons of this couple.

Here are pictures of Friedrich and Justine Lorenz.

Here is a photo that is described as a Lorenz family reunion taken some time in the early 1900’s.

I am thinking that this photo may have been taken in 1910, because I think I see Friedrich Lorenz sitting in the front, but I do not see Justine.  It may have been the year she died.  I am also thinking we are seeing some ball players standing in the back wearing bow ties.  The youngest of the Lorenz children was Herbert who was born in March of 1910, and he may be the baby being held by Emmanuel in the front row.

The photo includes the obligatory beer servers on the sides, and some chickens managed to photo bomb the picture.  The house is the Emmanuel Lorenz home.

Here is another family photo of the family of Emmanuel and Martha Lorenz taken in 1913.

The caption names all the members of the family.  Here is a brief description of what I know about the Lorenz boys.

Here is yet another photo taken of this family at a later date. 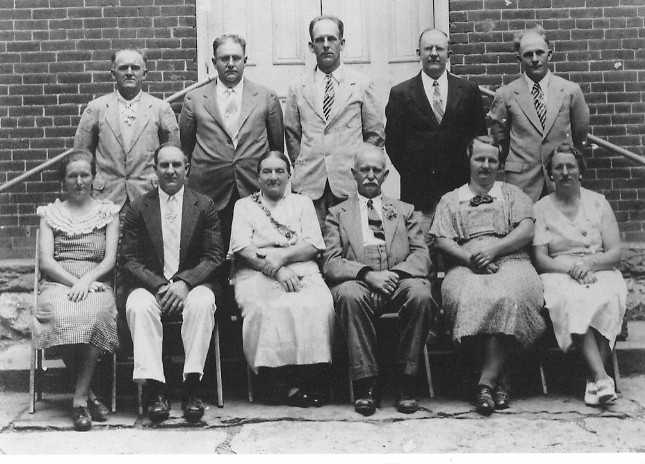 I challenge you to figure out who is who.

Obviously, I never saw the Farrar Reds play ball.  However, I can picture a team that played hard, played tough, and maybe even played a little dirty.  After all, the time when they played was the same time as major league players such a Ty Cobb played.

This is also one of those times when I wish I had the capability of colorizing the photo of the Farrar Reds.  I cannot imagine those uniforms being any other color than red.

Just one more note:  The scorekeeper in the Reds picture was Walter Eggers.  He would go on from being scorekeeper to becoming bookkeeper for the Eggers Store in Farrar to becoming a probate judge.  Walter’s son, Fred, would also become a bookkeeper who has now gone on to become a docent at our museum and contributing writer on this blog.

4 thoughts on “Building a Baseball Team”