Two large families became connected by a marriage that took place on this day in 1889.  These two families were the Beyer family of Altenburg and the Lueders family of Wittenberg.  Yet even though this marriage took place at Trinity Lutheran Church in Altenburg, the groom had to travel all the way from Michigan to attend the ceremony.  That was because by the time of his wedding, he was a Lutheran pastor serving St. Paul’s Lutheran Church in Unionville, Michigan.  However, he was returning to his hometown for the wedding.  The bride was Clara Lueders; the groom was Rev. John Beyer.

Clara was the daughter of Wilhelm and Theresa (Lehner) Lueders.

There were twelve children born to this couple.  The first two children were born in New Wells, Missouri, but at the end of the Civil War, the Lueders family moved to Wittenberg where Wilhelm was a storekeeper.  That store was discussed in the past two blog posts.  It was the same store that was sold by Wilhelm’s son, Otto, to Adolph Thurm.  Here is a photo of that store.

Clara was the fourth child in the family.  However, by the time she was born, the firstborn child had died, so she was the third oldest of the living children.  I will mention a few more of her siblings later in this post.

Rev. John Beyer was the firstborn child in the family of George Michael and Sarah (Kramer) Beyer.  Around here in those days, John’s father, George, was simply called Teacher Beyer.  He was a teacher at Trinity Lutheran School from 1863-1906…..43 years of service at the same school.  Teacher Beyer’s brother, Rev. J.P. Beyer, was the third pastor of Trinity who arrived here in 1857,  right after Rev. Schieferdecker had left the church to form Immanuel Lutheran Church.  Rev. Beyer left Altenburg right about the same time that Teacher Beyer was arriving in 1863.  Teacher Beyer was one of the participants in a triple wedding which took place at Trinity Lutheran Church in 1864, when three different siblings in the Kramer family were married on the same day.  That story was told in the post, Three in One at Trinity.  Here is a photo of Teacher Beyer which was taken around 1893. 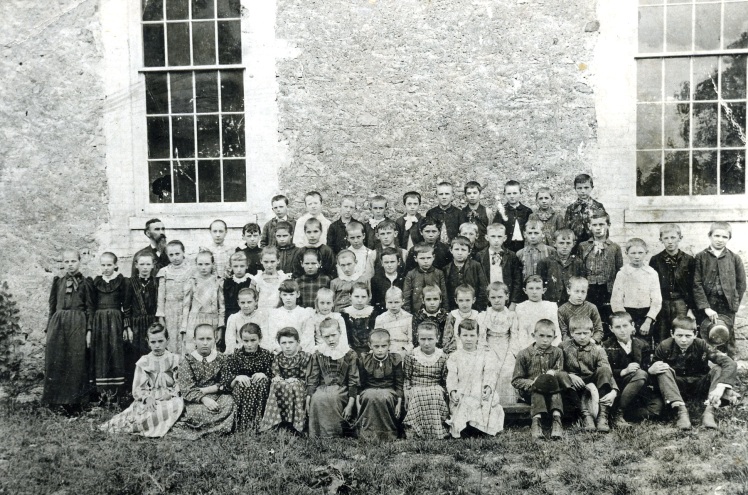 As a former teacher, I am amused by the fact that Teacher Beyer is the only one who is not looking at the camera.  He may have been staring down some students who he wanted to keep in line.  Here is another photo of Teacher Beyer in a collage of several Trinity teachers from the past. 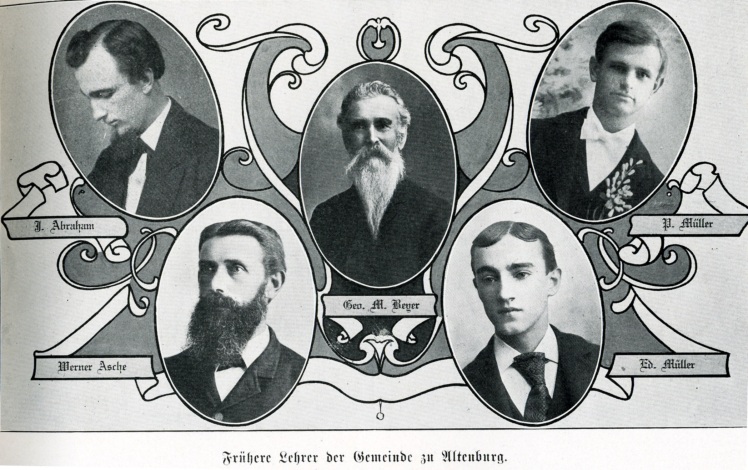 So on June 7, 1889, the storekeeper’s daughter and the teacher’s son were married.  These newlyweds then returned to Michigan where their first two children were born.  Then in October of 1893, their third child was born near Ft. Wayne, Indiana.  Pastor Beyer had taken a call to St. Paul’s Lutheran Church in Gar Creek, Indiana.  He would remain at that congregation until he retired.  Here is a photo of that church.

John and Clara would eventually have seven children.  Clara would die in 1940; John died in 1942.  They are buried together in Concordia Cemetery in Ft. Wayne, Indiana.  Here is a photo of their gravestone.

Not long after Rev. Beyer died, a teacher by the name of Ernst Brockmann took a call to serve at St. Paul’s Lutheran in Gar Creek.  That was one of the two Ernst Brockmanns that were discussed in the story, A Lutheran Genealogist’s Nightmare a while back.  He had married Norma Bachmann from Farrar when he was a teacher in Uniontown.

What I find interesting about this story is that it is yet another one that has someone from Perry County who ended up in this area of Indiana just east of Ft. Wayne.  Several of them had the Lueders name.  Clara’s brother, Dr. Albert Lueders, moved to this area sometime after 1929 and lived there until his death in 1942.  That story was told in the post, Baptized with an Angel, Married to a Doctor.  Albert and his wife, Johanna (Eggers) are buried just down the road from Gar Creek in Christ Lutheran Cemetery in Woodburn, Indiana.  In another recent story, Keepers of the Hotels, it was mentioned that another brother of Clara, Rudolph Lueders, was living in Woodburn, Indiana before he was married in Perry County and ran the Ross Hotel in Perryville, Missouri.

Teacher Brockmann’s arrival in Gar Creek in the 1940’s illustrates an interesting aspect of Perry County history.  Teacher Brockmann grew up in West Point, Nebraska, which is one of the places where we see several Perry Countians settle in the early 1900’s.  Now he had become a teacher in what might be described as another Perry County outpost in Indiana.  I am thinking that the original Perry Countians to settle in the Gar Creek area were the Beyers in 1893.  Then they attracted more from Perry County over the years, especially from the Lueders family.  I’m going to be keeping my eyes open for others from Perry County in this Indiana region.

4 thoughts on “From Brazeau Creek to Gar Creek”