In 1923, a book by the title, Tarzan and the Golden Lion, was published.  Its author was a man by the name of Edgar Rice Burroughs.  It was just one of numerous books he wrote about the fictional character Tarzan. 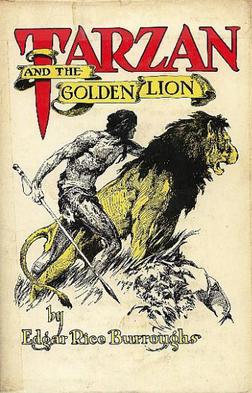 At about the same time as that book was published, a man by the name of Edgar Leo (Lion) Burroughs was getting married to a girl by the name of Minnie Wulf in Kansas.  Edgar Leo Burroughs was born in Perry County on August 4, 1899.  He was baptized at Trinity Lutheran Church in Altenburg.  Edgar was the son of John and Wilhelmina (Schulenburg) Burroughs.  Here is a photo of Edgar’s parents.

A story was done a while back about the Burroughs family titled, Perry County Connection to Booker T. Washington? Really?.  That post explained how the Burroughs surname managed to get to Perry County, Missouri.

In 1917 or 1918, Edgar filled out a World War I draft registration.  On it, he indicated that he was employed at the Mueller Roller Mills in Altenburg.  A story was done about that company called, Mueller Millers.  In that story it said that the building that housed those roller mills burned down in 1919.

Here is a photo of the Burroughs family taken at a later date.  Edgar is the second from the left in the back row.

I must admit that I was puzzled for a while about how Edgar found a bride in Kansas, but now I think I know what the connection is.  Here is the 1920 census from Wittenberg, Missouri which shows Edgar.

Edgar is living with the Paul Lungwitz family.  Paul and his son, Otto, who also went by the nickname Nick, were running a ferry out of Wittenberg at the time.  You cannot see it in this image, but Edgar was listed as working in the swing factory.  For background on the swing factory, check out the post, Frogtown Furniture.  Do I dare tell another joke about Tarzan and the swing factory?

In that same year, you find this census in Grand River, Sedgwick County, Kansas showing the Wulf family, including Edgar’s future wife, Minnie.

Grand River is located just outside Wichita, Kansas.  William Wulf was a farmer.  This entry show that there were two hired hands living with his family.  They were Eduard and Ernst Longwitz (Lungwitz) of Missouri.  These two were indeed from Perry County, Missouri and were cousins of the Nick Lungwitz who was running the ferry.  By the way, they were also brothers of William Theobald Lungwitz, the World War I casualty that was the subject of the post, Theobald Almost Made It.   I have to think that the Lungwitz brothers must have had an influence on Edgar finding his bride in that household.  In the mid-twenties, the swing factory closed, and Edgar was probably looking for work…..and possibly a bride.  He found a member of the Wulf pack in Kansas.  Here are photos of Edgar and Minnie that must have been taken around the time of their marriage. 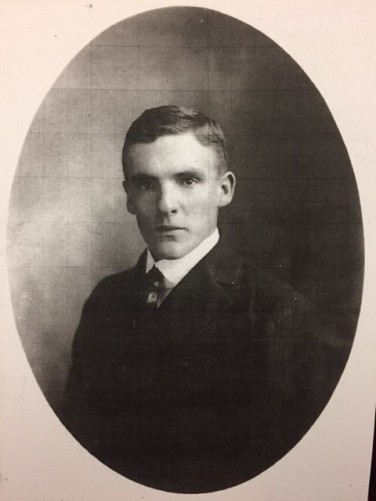 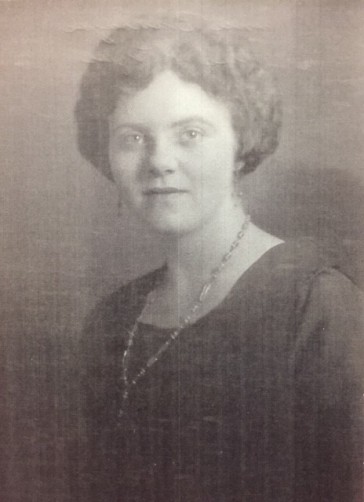 After getting married, we find Edgar and Minnie living in St. Louis, Missouri in the same household with his parents and a few siblings.

Edgar was working as an order filler for a packing company.  For some reason, this couple had a son by the name of John who was born in 1930, but was baptized in a Lutheran church in Texas in 1932.  Here is that record.

In a 1960 city directory, it shows Edgar and Minnie living at 5415 Union Blvd. and Edgar working at Crown Cork and Seal Company.

Do you remember using one of these regularly? 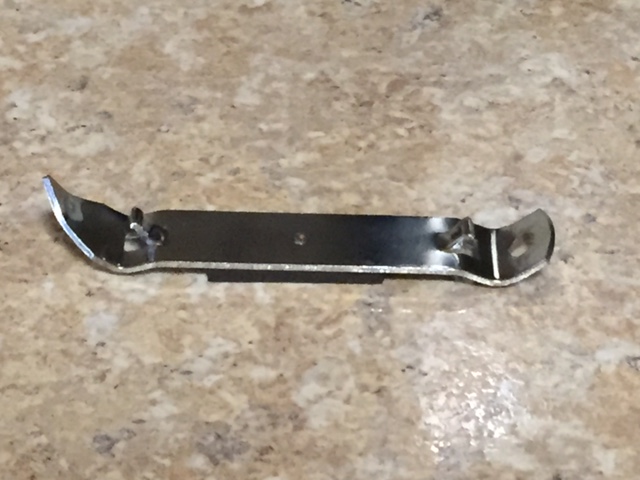 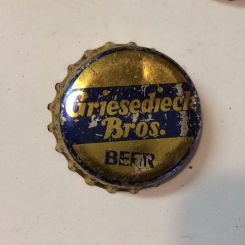 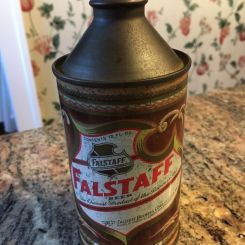 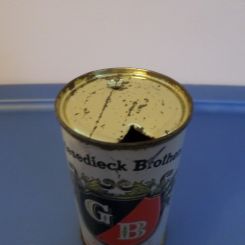 The Falstaff container was called a crowntainer.  It had a bottle cap on top.

Edgar’s death is also puzzling.  Why was he in Mexico, Missouri.  The form indicates that he was there just a matter of weeks before his death, and his address is still given as being 5415 Union Blvd. in St. Louis.  His wife, Minnie is the informant for the death.  It just seems to be an unusual situation to me.  Here is another puzzling item.  It is a Social Security record for Minnie’s death. 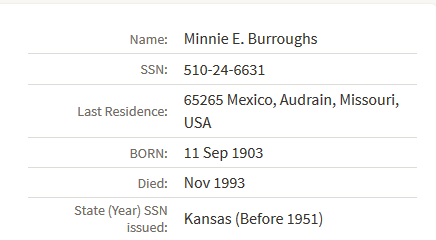 It indicates that Minnie’s last residence was Mexico, Missouri.  I was unable to find out where she died or where she is buried.  Edgar is buried in East Lawn Memorial Park in Mexico, and there is no photo of a gravestone on Findagrave.com.

I did a search on the internet with the inquiry, “Where is Tarzan buried?”  Several answers came up.  One answer was that Tarzan never died in the fictional books that were written by Edgar Rice Burroughs.  Another answer told when and where Johnny Weissmuller was buried.  He was probably the most famous of the Tarzan actors.  I can answer that Perry County’s Tarzan is buried in Mexico.  As for his mini Wulf wife…..his Jane…..I do not know where she is buried.  Do you?

5 thoughts on “Tarzan, the Lion, Meets the Wulf”