In the German language, the word kühn means “bold” or “daring”.  There were two surnames in the Gesellschaft that contained kühn, Kühn and Kühnert.  As time went by, many German names containing an umlaut had that umlaut eliminated and replaced by putting an “e” after the vowel with the umlaut.  So these two surnames became Kuehn and Kuehnert.  Certainly, all of the members of the Gesellschaft must have been bold to make that dramatic decision to move their families halfway around the world to start new lives in America, but today’s story will focus on one of these families with “bold” names. 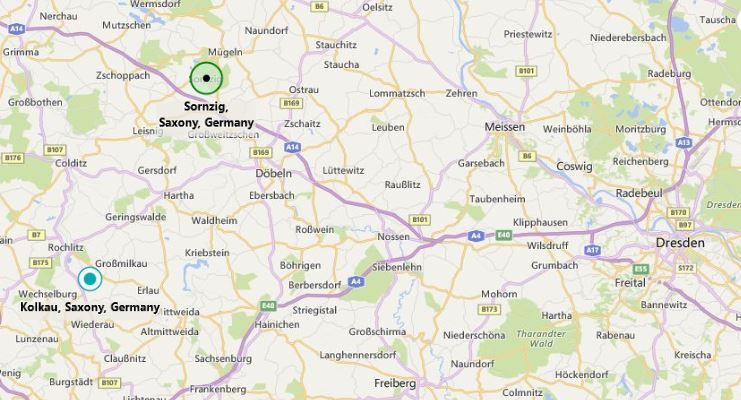 Both of these families traveled aboard the Copernicus on their voyage across the Atlantic.  Also, after arriving in America, both families settled in the community that came to be known as Seelitz.

One more thing before moving on.  Around here, the name Kuehn is pronounced the same as the word “keen”.  It follows that Kuehnert is pronounced “keen-ert”.  Bottom line is the fact that this is about as close as the English language can come to replicate the way Germans pronounce their umlauted “u” sound.

Today, I will focus on the patriarch of the Kuehnert family that came to the United States in 1839.  Today is his birthday.  His name was Johann Christlieb Kuehnert.  He was born on January 5, 1795.  When he arrived in America, he was 43 years old….almost 44.  The Copernicus arrived in New Orleans on December 31, 1838, just 6 days before his birthday.  If they were in a mood to celebrate birthdays during those difficult times, they must have done so on the riverboat Rienzi on the way up the Mississippi River.

Please note that on this passenger list that, for some reason, Johann Christlieb is called Gottlieb, and his occupation is shown as a mason.  He came over with his wife, Rosine (Ludwig), and two children.  Once he was living in the Seelitz community, he became a farmer, and the couple had no more children.  Johann Christlieb owned the piece of property in Seelitz shown on this map with the #5. 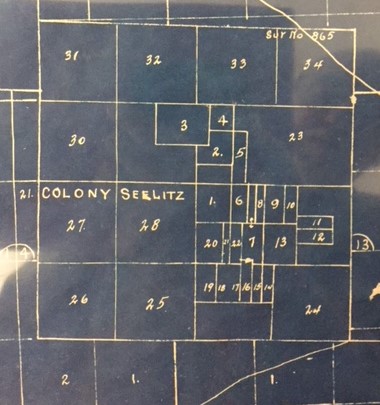 When his daughter, Juliane, got married, the church record in the Trinity Lutheran books states that she was the 3rd daughter of Joh Christlieb Kuehnert.  One must assume that there had been other children born in Germany to this couple, and those children either died or were left behind in Germany.

At this point, I am going to veer off this story to talk about the construction of the first permanent church building in Altenburg.  That building was dedicated on Pentecost Sunday in 1845, which probably was May 11th.  I have this theory of my own in which I speculate that Johann Christlieb may have used his masonry background to assist in the building of this church.  Our museum uses this building to this day for some of our exhibits.  Years ago, a “window” was made in one of the walls to show the original masonry of this building.  Here is what that looks like. 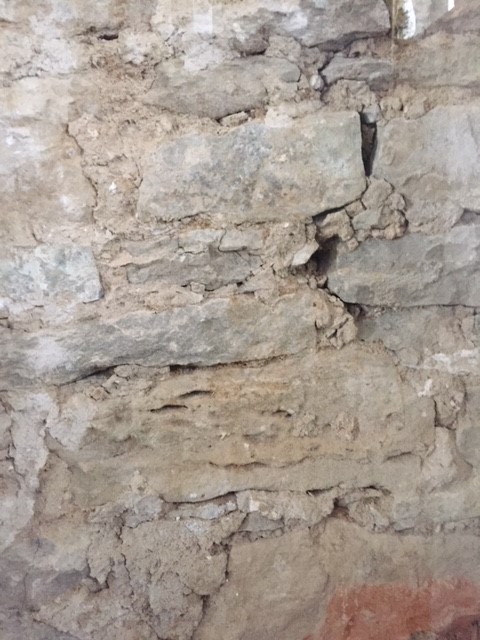 As you can see, stones were not cut in uniform fashion to be placed on top of one another.  It appears to be random rocks stacked somehow with some sort of grout to hold it together.  To me, it is amazing that this building still stands solidly to this day.

There were only a few immigrants who were said to be masons.  Of those few, only Mr. Kuehnert and Johann Gottlieb Burkhardt (who came to America with the Gruber Group) seem to have been involved in Trinity Lutheran Church in Altenburg.  Neither one of these gentlemen were on the building committee for this first church, but I have to wonder how these people managed to put together a rock church without some sort of knowledge of masonry.

Well, it just so happens that when Juliane Kuehnert married Johann Christian Friedrich Saalfeld in August of 1845, they were just the 2nd marriage to be performed in this new church.  Here is their marriage record as you find it in the Trinity church books.

This marriage would have been conducted by Rev. Gotthold Loeber, who just so happens to be a birthday boy for January 5th also.  I have to think that Johann Christlieb Kuehnert would have taken pride in the fact that he had the same birthday as his pastor.  His pastor was exactly two years younger than he was.

Johann Christian, a son, shown here as being 23 years old, was married to Anna Elizabeth Seim one year later.  Curiously, he was married at Old Trinity Lutheran Church in St. Louis.  However, he returned to Perry County with his new wife, bought some more land around Seelitz, and raised his family there.  Here is a photo showing Johann Christian with Julius, his son, and his family.

Johann Christlieb Kuehnert died in 1854.  Here is his death record in the Trinity books.

When this death was recorded, it was done by Rev. Georg Schieferdecker, who had a very distinctive style of writing records.  Maria Rosine Kuehnert died in 1859.  Here we see her death record.  You can see a definite difference in handwriting here.  By 1859, Rev. J.P. Beyer was the pastor at Trinity.

I believe these two were buried in the Trinity Lutheran Cemetery in Altenburg, but they are not to be found on Findagrave.com.  It is likely that if there are gravestones there, they may be some of the unreadable ones.

A lot of Kuehnerts came out of the Johann Christian Kuehnert family, and many of them are notable.  I know that I have already written stories about a few of them.  If you enter “Kuehnert” in the search function on this website, you can find those posts.  I know there are several full-time church workers that came out of this family.  Several of them, including Christian himself, did military service for their country.  Another descendant from this family, Leonard Kuehnert, was a past president of the Perry County Lutheran Historical Society for many years.  However, right now, around here there are not too many Kuehnerts left.  I just know of my cousin, Myrtle, who married a Kuehnert, who still lives in Altenburg, and she only had daughters.

Here is a photo of my cousin, Myrtle. 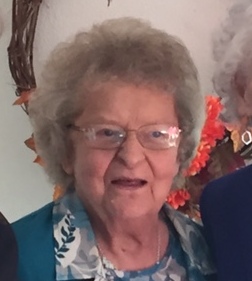 I could get in trouble for posting this photo, but I will attempt to save my skin by saying that when Myrtle married Ernst Kuehnert back in the day, it was the original version of “The Bold and the Beautiful”.

2 thoughts on “The Bold Immigrants”