In a typical post written by me you would find a photo of a gravestone toward the end of the article.  Today, will not be typical.  I am going to start with such a photo.  Here is the gravestone of Leroy and Eleonora Wunderlich which can be found in the Trinity Lutheran Cemetery in Altenburg, Missouri.

First of all, you may notice that Eleonora’s birthday is today’s date, January 24th.  Leroy had a birthday just two days earlier.  What makes this situation even more interesting is the fact that this couple was married on January 23rd.  It makes you wonder, “Did this couple choose this wedding date on purpose in order to fit in between their two birthdays?”  One thing that I think makes this more likely is the fact that the day they were married was on a Tuesday, not your typical weekend wedding.

First, let’s look at Leroy.  He was the son of Leo and Lydia (Hunt) Wunderlich.  Leroy was baptized at Zion Lutheran Church in Pocahontas.  Here is an image of his baptism record.

Later during that same year, 1917, according to his father’s World War I draft registration, his family was living in Longtown, and his father was working in a garage.

Now let’s move over to Eleonora.  Her maiden name was Eleonora Palisch.  She was the daughter of Carl and Frieda (Stueve) Palisch.  When she was born in 1918, she was baptized at Immanuel Lutheran Church in Altenburg.  Her grandfather was Louis Palisch.  Here is a photo of him.  (I’m mainly showing this photo because I love his mustache and hat.)

I am also showing his photo because his name shows up on the 1915 land map of Perry County.  His land is indicated by the red arrow in this image.

By the way, when the Wunderlich family moved to Altenburg, their property was about where the Paul Burroughs land was shown on this map, indicated by the blue arrow.

Louis’s son, Carl, farmed his father’s land, and when they had children, they attended Trinity Lutheran School in Altenburg.  It was probably just easier for them to get to that school as opposed to going across town to attend the public school where most other children from Immanuel Lutheran attended.  We have this photo of Eleonora’s parents.

We find both Leroy and Eleonora in this 1928 photo of Teacher Fiehler’s class at Trinity Lutheran School.  They are indicated by the arrows.

As a former teacher, I have taught students who were in the same class who eventually got married to each other.  It always makes me chuckle when I think back to the times when those future spouses would act like they wouldn’t want anything to do with each other.  Classmates getting married in later years was something that was much more likely in a rural setting like you find here in East Perry County.

Here are enlarged images of Leroy and Eleonora.

These two were married in 1945 when World War II was drawing to a close.  Here is their marriage license.  They were married at Trinity, Altenburg by Rev. Adolph Vogel.

We have this photo of Leroy and Eleonora.

Leroy was a truck driver who worked for his father, Leo, who operated a trucking company called LW Transfer Company.  That company mostly hauled stuff between here and St. Louis.  Here are some receipts from that company. 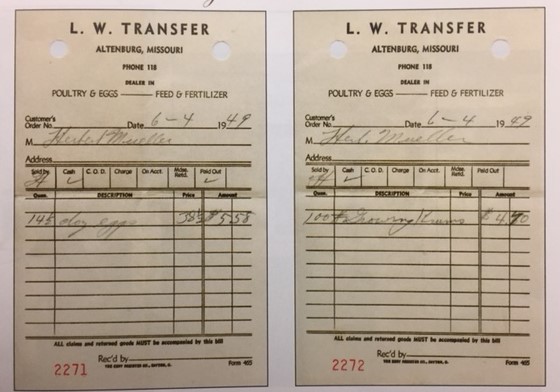 The Wunderlichs had just one child, a son named Roy.

Leroy must have found it easy to remember those special occasions that husbands better not forget…..his wife’s birthday and their anniversary.  All he had to do was wait for Eleonora and his son, Roy, to celebrate his birthday, and that should have triggered his memory so that, if he hadn’t already remembered, he would be able to get prepared for the special occasions that were going to take place the next two days.