Hugo Gustave Werner Mueller was born on October 2, 1898, so he would have been celebrating his 120th birthday today.  Werner’s father, who had previously been married to Anna Drumtra, had married Marie Asche in 1897.  Their first child was Werner.  He was baptized at Trinity Lutheran Church in Altenburg.  In all, of Anton’s 15 children that lived into adulthood, 13 of them were boys.  In a previous post, I described a boy in his family as One of Anton’s Army.

In this 1910 census from Altenburg, we see Werner as 11 years old with 9 children in the Mueller family.  The three oldest ones were from his first marriage.

In 1918, when Werner filled out his World War I draft registration, he was living in Altenburg and working as a farm laborer for his father.

The house in which Werner grew up is shown in these two photographs.  This house no longer stands in Altenburg.

One year after the arrival of Werner in 1898, a girl by the name of Edna Franke was born in Uniontown.  She was born on July 25, 1899 and baptized at Grace Lutheran Church in Uniontown.  Edna was the daughter of Eduard and Anna (Eggers) Franke.

We have this wedding photo of Werner and Edna.

Werner and Edna had four children, two boys and two girls.  In the 1930 census, Werner was still in Altenburg and was recorded as working as a teamster hauling logs.

Edna died in 1949 at the age of 49.  Her death certificate says she died of breast cancer.  Later in the same year, Werner married Regina Merrick.  As near as I can tell, Regina was a waitress at a restaurant in St. Louis.  She was originally from Beaucoup, Illinois, which is near the Nashville/New Minden area.  Here is a photo of Werner and Regina.

I will now show a series of family photos that were taken over the years that included Werner Mueller.  Apparently when the Anton Mueller family got together for events, they would take the time to get a photograph.  Here is the first one.

The above photo is said to have been taken in 1916.  Werner is the young man standing behind Anton’s right shoulder.  Werner was still single at the time.

I do not have a date for the above photograph.  Werner is standing fourth person from the right in the back.  Look at all those males.

As indicated, the above photo was taken in 1939 in Altenburg.  Werner, for some reason, is called Hugo in this picture and is the last person standing on the right. 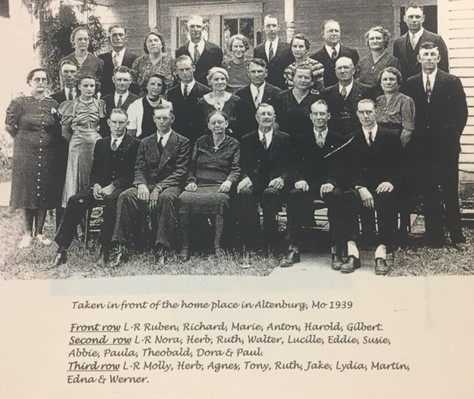 This photo was taken at the same time as the previous one, but it includes the spouses.  Edna was still alive at the time, and she and Werner are standing to the far right in the back row.

This photo was taken in 1971. What makes it even more interesting is the fact that this photo was apparently taken on Werner’s 73rd birthday.  Werner is standing in the back, third one from the right.  Right in front of him is his second wife, Regina.

On the same occasion, which was a wedding, this photo was taken of many Mueller siblings, and this time, the photo is in color.  Werner is second from the left.

Finally, I leave you today with this photograph that includes Werner, Edna, and two of their children. They are the family standing to the right of the photograph.

These folks are said to be heading to a family wedding in St. Louis in 1928.  At that point in their lives, Werner and Edna were still living in Altenburg.

Isn’t it wonderful when we have so many family photographs to look at, and they include identification?  Get out and take those family photos, folks, and make sure to identify the people in them.

One thought on “Anton’s Family Photos”