Because of other happenings today, I do not have the time to do my normal research.  However, I do have something interesting to share and will take some time to make some observations about blogging in general.

After publishing yesterday’s post, Getting Used to Girls, I received an e-mail from a descendant of the Heins family that was highlighted in that post.  I will speak about what was in that e-mail later.  But first, let me share some experiences we have had on this website regarding the types of responses we sometimes get to our posts.

First, I confess to my addiction of looking at the stats that are generated by WordPress, the company that we use to host our website.  Sometimes I notice rather unexpected results.  For example, two days ago, we received 68 new views on a post that was written back in May of 2017 called Cherokee Uprising.  I cannot help but wonder what it was that precipitated so many new views on a post that was written so long ago.  Perhaps that story was shared somewhere on the internet, and that generated those new views.  However, I have no way of telling.  At least I haven’t discovered a way to find out.  I have seen this kind of thing happening for other posts also.

Another situation fascinates me.  There are a few previous posts that get fairly regular new views as time goes by.  One particular post is another one that makes me wonder what is going on.  That post was titled, From Frohna to France – A WWI Wagoner.  When I see this post being viewed again, I often also see that someone has gotten to our website through an internet search for information on “wagoner” and “World War I”.  Our post must show up on those results and someone must click on it to see what it says.  That post was written back in 2016 and received about 90 views in the days after it was posted.  However, in the years since, that post has received over 1600 views.  That is pretty amazing.

One thing that we do not experience often is a comment on a blog post on our website.  We get a few more comments on our Facebook page when we share our stories there, but even then, comments are not that common.  We are told that each blog post we publish receives an average of one comment per post.  Actually, the number of comments posted on our website is smaller than the number of posts we have published.  I know that I really enjoy getting comments from our readers.  Almost all of them are very helpful in providing additional information on the subjects of the posts.

What I received in my e-mail yesterday has happened on a few other occasions in the past, and each time I have been thrilled.  That is because I have received photographs of people who were discussed in a post.  In yesterday’s e-mail, I received four photographs from Lynn Heins, who has given me permission to post them here.  In this case, the post yesterday was one of those stories I published without being able to find any photos of the people who were highlighted.  I know that adding photographs of the people about whom I am writing makes a post so much more enjoyable.  I am going to display the 4 photos Lynn sent.  First, here is a photo of Sophia Heins’s parents, Leo and Anna (Versemann) Heins.

I love it when I see the photographer’s name on a photo like this.  In this case, I have learned that the city of Murphysboro, Illinois had two major photography studios in the time period when this photo was taken.  Those two were this one, the L.R. Stewart Studio, and the Dagle Studio.

Next, here is a rather early photograph of Sophia Heins.  It’s only a guess, but I think this was taken before Sophia was married.

Lynn also sent me the wedding photograph for this couple.

A photograph like the one above is good for sparking a conversation about wedding fashion trends.  This one includes several of what my wife tells me are “accessories”.  I am especially interested in what is found on the end of the chain being worn by Sophia.  If you have any ideas, please share them.  Here is an enlargement of that part of this photo. 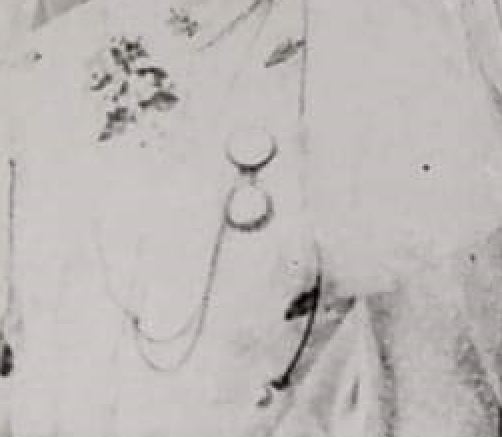 The fact that this wedding took place in 1903 is also the year in which the events take place in my book, Wittenberg ’03.  Since that book and my next one, Wittenberg ’04 deal with some romances and marriages, it helps me to see wedding pictures from that era.  It helps me make books like this as authentic as possible.

Finally, I was also sent this photo of the Gottlieb Miesner family.  The “jewelry” worn by the subjects are similar to other family photos I have seen which were taken on the occasion of a wedding anniversary.  I think that is the case here as well, and if I am correct, this one was taken in 1928 when Gottlieb and Sophia would have been celebrating their 25th anniversary.  The ages of the children would have been about right also.

In closing, let me just encourage you to not only read the stories we publish, but also comment on them, send us additional information, or share the stories with others who may also be interested.  One of the goals of this blog is to preserve the history of this area, and we would like to reach as many people as possible so that we can attain that goal.

2 thoughts on “Getting Used to Girls Again”