I once again feel that God is poking me to write today’s story.  I say that because this tale is impacting my life this week.  I will get to that later.  First, let’s discuss today’s birthday boy.

August Bohnert was born on December 21, 1882.  He was the son of Ludwig (Louis) and Maria (Amschler) Bohnert.  Louis and Mary had been married by a justice of the peace in 1874.  It was the marriage of a Roman Catholic and a Lutheran.  In those days, it was likely that such a marriage was not approved by either the parents or the churches.  Here is the marriage record for that couple.

We have a photo of August Bohnert’s parents.

We have a book in our museum’s research library called Bohnert Family Heritage.  In that book, it states that after Louis and Mary were married, Mary became a Catholic, so August must have been raised in the Catholic faith.  The first census in which you find August was the one taken in 1900.

In the 1910 census, we find August farming with two of his brothers in Union Township.

Now let’s turn our attention to August’s future wife, Martha Wahlers.  Martha was born on June 28, 1892 making her about 10 years younger than August.  She was the daughter of Johann and Margaretha (Stelling) Wahlers.  All the children in the Wahlers family, including Martha, were baptized at Salem Lutheran Church in Farrar, Missouri, so Martha was definitely raised in the Lutheran faith.  Below is Martha’s baptism record.

In 1910, we find Martha living with an Oetjen family in Fountain Bluff Township, Illinois working as a hired girl.

On April 20, 1913, August Bohnert and Martha Wahlers were married at Zion Lutheran Church in Crosstown, Missouri.  If August was still a Catholic, this was the second straight generation of a Catholic marrying a Lutheran, but this time, the marriage was conducted by a pastor in a church.  Below in the marriage license for this couple.

We also have this wedding photo of August and Martha.

I will add at this point that August’s brother, Ferdinand Bohnert, would later marry Martha’s sister, Anna Wahlers.  Since the marriage records we have for Zion, Crosstown are alphabetical, we can see these two marriage records in the image below.

According to our German Family Tree, and supported by the Bohnert Family Heritage book, this Bohnert couple had 6 children.  The 1915 land atlas for Perry County shows a parcel of land owned by A.L. Bohnert.  You can also see that his brother, Ferdinand (Fred) had a nearby farm, as well as Wahlers land owned by Martha’s parents.

The first census in which we find this Bohnert family was the one taken in 1920.  Three children had been born by that time.

Although this Bohnert family is found in both the 1930 and 1940 censuses, I am only going to display the one for 1930.  This entry shows all 6 children, 5 of which were boys.

I will be following the son named Edward Bohnert soon, so please note that he is in the above census as a 5 year-old.  August Bohnert had his World War II draft card filled out in 1942.

August Bohnert died in 1961 at the age of 78.  We have his death certificate.

Martha Bohnert died one year later in 1962 at the age of 70.  Below is her death certificate.

August and Martha are buried together in the Immanuel Lutheran Cemetery in Perryville, Missouri.

Edward Bohnert, the son of August and Martha, would eventually marry Lorna Meinz.  Edward and Lorna had a son named Charles Bohnert.  Sadly, Charles Bohnert died here two days ago, leaving his wife, Martha (Littge) Bohnert, as a widow.  Charles will have his funeral at Trinity Lutheran Church in Altenburg on Monday.  Charles was a member of my Tuesday morning men’s Bible class, and he was almost always in attendance.  He will certainly be missed in this community.  Here is the photo that is included with Charles’s obituary.

If you would like to read Charles’s obituary, you can find it here:

Now I will tell you why I felt God had a hand in today’s story.  In looking for an event that took place on December 21st, one of the first names I ran across was August Bohnert, who has today’s birthday.  At that point, I did not know August was Charles Bohnert’s grandfather.  Now I know, and now you know.  It was icing on the cake to find that August had a wife by the name of Martha, just like Charles.

In closing, let me say that this community has lost a real servant.  Charles Bohnert was always in the business of serving other people.  He delivered Meals on Wheels and was a tireless worker at almost every church or community dinner that was held here.  He was one of the few remaining people who promoted the Lutheran Laymen’s League and was an avid supporter of Lutheran schools.  There were also several things that Charles did behind the scenes of which most folks around here were unaware because he wasn’t about getting credit for doing good.  Charles also had to endure quite a few medical setbacks in his life.  I take comfort in knowing that Charles will no longer suffer and is now experiencing eternal joy in heaven.

I also cannot resist saying one more thing.  It might just be me, but when I look again at this photo of his great grandfather, Louis Bohnert, I think if you shave the beard, leave the mustache, and take off the hat he’s wearing and replace it with either a Cardinal’s hat, a Green Bay hat, or a MAGA hat, you can see Charles. 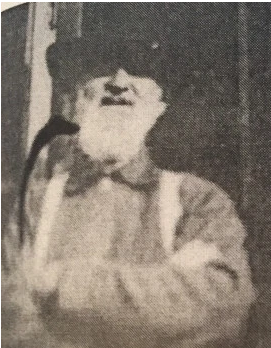 2 thoughts on “August, Edward, Charles, and a Few Martha’s”