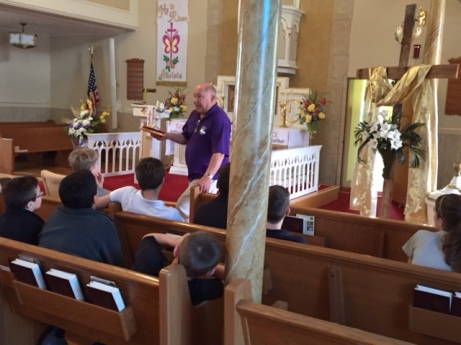 The Lutheran Heritage Center & Museum played host today to a group of students from St. Paul’s Lutheran School in Des Peres, Missouri.  It was a unique opportunity for us to inform these students that there are plenty of connections between the Log Cabin College here in Perry County and their school in the St. Louis area.

The first pastor of St. Paul’s Lutheran Church was Rev. J.A.F.W. Mueller, who was the first graduate of Concordia Seminary in Altenburg.  Rev. Mueller, often referred to as Alphabet Mueller, was also a member of the first class of the Log Cabin College in 1839.

The third pastor of St. Paul’s Lutheran Church was Rev. Theodore Miessler.  Rev. Miessler was married to one of the daughters of Herman Buenger, a druggist in St. Louis, who was also a member of that first class of the Log Cabin College.

Rev. Miessler married Mathilde (nee Buenger) on August 8, 1888.  Mathilde was his fourth wife.  The previous wives had all died.  I have this theory that Rev. Miessler insisted on this wedding date (8/8/88) because he knew he was going to have trouble remembering his anniversary, having already had three previous anniversaries.

There is yet another connection.  In 1868, not long after a Civil War which caused quite of few children to lose their parents, the Lutheran Orphan’s Home was opened right next to St. Paul’s Lutheran Church in Des Peres.  The person primarily responsible for organizing this institution was Rev. Johann Friedrich Buenger.  Rev. Buenger was one of the builders of the Log Cabin College as well as one of its first teachers.

Now these young people have a better understanding not only the events which happened here in Perry County, but also how their own church and school were an important part of the story.