Lindy (Mueller) Roth, who regularly feeds me breakfast at the Old Bank Coffee Shop (We affectionately call it the Bankery), has provided me a photograph which is the centerpiece of today’s story.  Lindy was born in California when her father was employed by the Alta-Dena Dairy, so this is yet another story about the Stueves in California.  Four other posts have highlighted the Stueve’s Alta-Dena Dairy.  You can find them here:

Here is the photo:

This photo was taken at the wedding reception of the marriage between Harlen Stueve and Darlene Stillman on October 3, 1964.  Here is a California record of that marriage.

An important question needs to be asked.  Is that California milk that is being served at this California wedding?  Obviously, the answer is a resounding, “No!”.  The beverage being served here is one that has been described as Lutheran Kool-Aid, the Perry County nectar of the gods.  That’s right…..it’s beer.  In fact, even though this photo was taken in on the Left Coast of the United States, it shouts out, “Perry County!”.  This is a scene which could be seen at Perry County wedding receptions repeatedly over the years.  Not only is there beer, there are beer servers…..all male.  I see at least two kegs of beer in the photo.

This photo also shouts out, “Perry County!” for another reason.  All four men in this photo probably came from the Perry County area (even though at least one of them was from the other side of the Apple Creek in Cape County).  From left to right in the photo we see Robert Mueller, Ray Schmidt, Larry Leimbach, and Gene Reisenbichler.  Let’s take a look at these jolly gentlemen.

We’ll start with Gene Reisenbichler.  Gene was the son of Leo and Alma (Boehme) Reisenbichler who lived in Shawnee Township in Cape Girardeau County.  They were members of Immanuel Lutheran Church in New Wells.  Like so many others from the Perry County area, Gene heard that there was good employment to be found at the Alta-Dena Dairy in Monrovia, California.  Meanwhile, the Stueves who ran the dairy also loved having the good, hard-working young men from Perry County working for them.  Gene probably moved to California sometime in the 1950’s when he was in his 20’s.  He apparently remained there the rest of his life because a California death record tells that he died in Los Angeles in 1985.  His body was returned to Missouri, and he is buried in the Immanuel, New Wells, Cemetery.

Larry Leimbach is somewhat of a mystery.  The name is probably correct according to several sources, and the Leimbach name is certainly a common one for the East Perry County area, but little is known about who his parents were and what happened to him.

Ray Schmidt is the son of Theo and Ruth (Petzoldt) Schmidt of Altenburg.  He was in California for a while working at the Alta-Dena Dairy, but would later return to Altenburg.  He married Carolyn Bremer and raised his family here.  Ray often regales us with his tales from his time working at the dairy.  Carolyn Schmidt now serves as the secretary of the board for our museum, and she and Ray both serve as docents here.

I wish I had a better photo of Ray, but this is all I could find on short notice.  They are both very valuable assets to our historical society.

I saved Robert Mueller for last.  Robert got married to Peggy Whittaker in 1958 and not long after, moved to California to work at the dairy.  We know that he drove one of the dairy’s delivery trucks.

We also know that he played on the company’s softball team.  He was an imposing figure.

However, tragically, just one year after he was photographed at the Stueve wedding reception, he was killed in a freak accident.  He was doing a side job when he was electrocuted.  Lindy, his daughter, was just two years old at the time.

Long story short, Lindy’s family later returned to Missouri, and she provides a very valuable service to our community to this day.  I thank her for providing much of the material for this post.

An interesting story is told about another Stueve here in Perry County.  This Stueve father had a daughter who was going to marry a young man who did not hail from Perry County and was not familiar with its customs.  The young man asked his future father-in-law as they were making wedding preparations, “Do we have to have beer at our reception?”  The father was not known for being a man of many words, so his answer was simple and to the point, “No beer…..No bride.”  That was the end of that.

Finally, I ran across this photo while researching another story.  I will not identify the people in the photo now.  This photo may show up in a future story.  I only post it here because it shows a Perry County celebration of a 50th wedding anniversary.  The young man in the front appears to have the appropriate adult beverages ready to serve for the occasion. 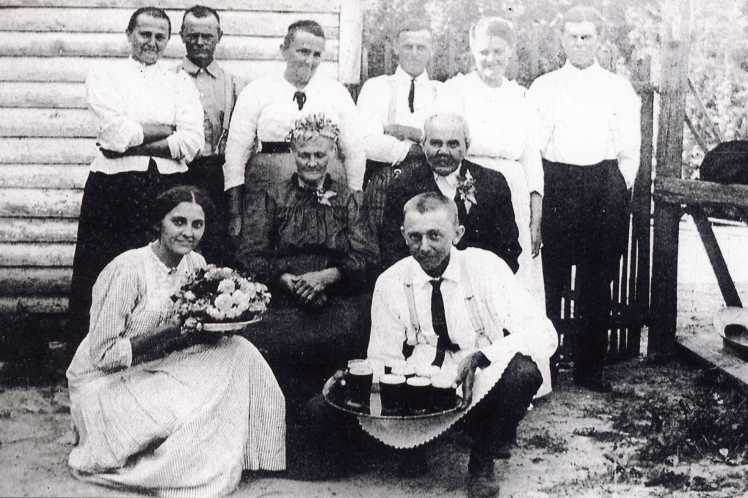 Feel free to comment if you know who is in this photo.  We would also love to have more info on Larry Leimbach if anyone has it.  Cheers.

7 thoughts on “Got California Milk? NO!”