Martin Mangels and Emily Vogel were united in marriage on April 13, 1902 in Frohna, Missouri.  This couple would have six children, one of which died in infancy.  But the early lives of these children was not without its drama.  Let me attempt to explain the Mangels saga.  But first, here is their wedding photo.

I believe the John Mangels in the census was Martin’s cousin from Perry County.

Tragically, Emily died of a heart attack in 1914.  Even though she died in Nebraska, she is buried in the Concordia, Frohna cemetery.  We do know that the rest of the Mangels family moved back to Perry County.

At the very end of 1919, on December 30, Martin would marry again.  His second wife was Lucy Meyr.  Here’s where things really get interesting.  Martin and Lucy moved to Kremlin, Montana.  Kremlin is found in north central Montana, about 20 miles from the Canadian border.  The 1920 census shows them living there, but there are no children with them.

Only the oldest of the five Mangels children had been confirmed before 1920, but before all was said and done, all of them would be confirmed at Concordia Lutheran Church in Frohna.  When the Mangels parents moved to Montana, their children were “farmed out” to other members of the family.  I am thinking that one of the reasons for leaving them behind is so that they could receive their confirmation and education at the Lutheran church and school here.  There was a Lutheran church that formed in 1919 near where the Mangels were living in Montana, but it was likely to be going through the early difficulties of getting started.

The oldest two children, Oneida and Marvin, lived with the Theodore Mangels family.  He was the children’s uncle.

Meta and Nelda were living with the August Vogel family.  They were their grandparents.

The youngest child, Esther, was living with the William Kaempfe family.  He was her uncle.

Other children were born to the new Mangels couple in Montana.  Three of the children left behind were married in Perry County.  Marvin moved to Montana also.  He is buried there.  Nelda may have moved there too.  She lived in Canada for a while and died in St. Paul, Minnesota.

In 1946, members of Mangels family got word that Martin had died in some sort of fatal accident.  The incident was reported in a local Missouri newspaper. 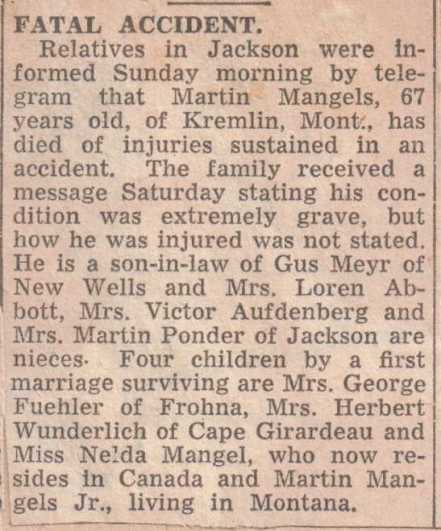 Lucy, Martin’s second wife, died in 1955.  Martin and Lucy are buried in a cemetery in Havre, Montana.

One more thing.  When I searched Bing Maps for the location of Kremlin, Montana, I found this image.  It amazes me.

If someone can inform me how the different colors of land show up on a satellite photo like this, I would appreciate it.

Our museum will have a new quilt exhibit on display later next week.  Maybe we should include this image in the exhibit and call it a quilt.