I was not quite sure what to call a group of swans, so I looked it up.  Although there are several options that are acceptable, the answer which seemed the most applicable is bevy.  The picture below shows a bevy of Swans. 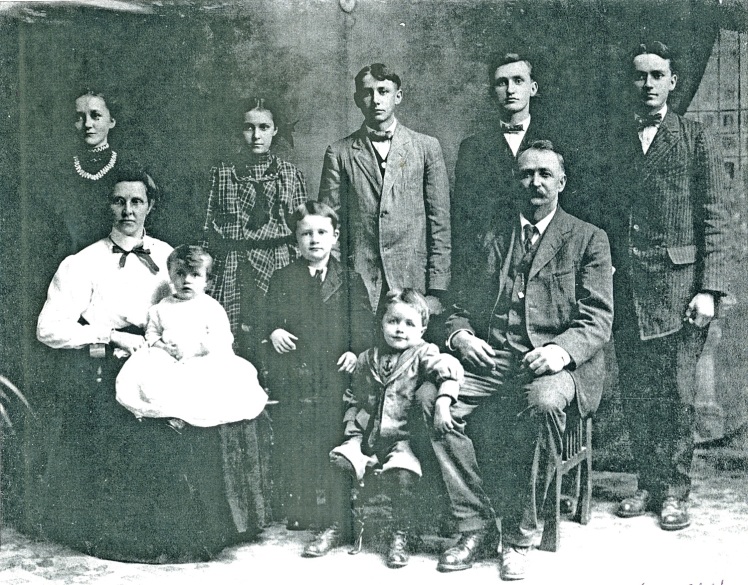 The children in the back row of this photo were the children of Charles and Emilie (Palisch) Swan.  From left to right:  Louise Swan Hecht, Mabel Swan Lichtenegger, the twins, Abel and Wilhelm Swan, and Reginald Swan.

After Emilie died in 1899, Charles married the widow, Carolina (Gratz) Petzoldt.  Her previous husband had died less than one year after they were married, and they had no children.  Charles and Carolina were married in 1903, and their children are shown in the front row of this photo.  From left to right:   Carolina Swan, holding Ralph Swan, Charles Swan Jr., Bryan Swan, and Charles Swan Sr.  Another child, Milton Swan, would be born in 1913 and join the bevy, so this photo must have been taken sometime after 1909, when Ralph was born, and before 1913.

A previous post was written about the Swan twins titled, Twins Keeping Folks on the Right Track.

The Swan land was located not far from where the new St. Paul’s Lutheran Church was built in 1920.  Here is the 1915 land atlas which shows his property.

You can see that the Brazeau Creek flowed right through his land.

Charles then became the postmaster for Wittenberg in 1915.  Here is a list of Wittenberg postmasters over the years.

Charles was the postmaster when the post office building (one of the few structures still standing in Wittenberg) was constructed in 1918.  Here is a photo of that building taken some time in the 1930’s.

For a while when he was running the post office, it is said that he lived in this house which later housed the Walter Weinhold family.  It was located not far from the post office.

Now I must move on to the reason I chose to write this post today.  On June 4, 1916, Reginald Swan married Alma Schoen at St. John’s Lutheran Church in Pocahontas, Missouri.  I am going to use a little liberty with the German language and say that the word schoene means “beautiful”.  So I would suggest that Alma the Beautiful became a Beautiful Swan.

The 1920 census shows this young family still living in Perry County and Reginald was a farmer.  I may be wrong, but it is my guess that Reginald and Alma may have been living on the Swan farm place after Charles became postmaster in Wittenberg.  However, in the 1930 census we find them living in Pocahontas, where Reginald was a mechanic in his own garage.  This couple began by having a stillborn, but then would have four other children.  I guess you could call them cygnets.

Reginald died in 1947; Alma in 1956.  They are buried in the St. John’s Lutheran Cemetery in Pocahontas.

3 thoughts on “A Beautiful Swan Joins the Bevy”