It was July 12th.  The year was 1904.  It took place in Wittenberg, Missouri, along the banks of the Mississippi River.  It was probably very hot and steamy.  It usually is at this time of the year.  There was no air conditioning.  There was no electricity, so even electric fans were out of the question.  The best the wedding gathering could do was to open some windows and wave something in front of their faces in an attempt to stay cool.  It was a Tuesday.  It was summer, so at least the school desks did not have to be moved to the side for a church service like they had to be during the school year.  This was the setting for the marriage of Marie Birner and William Mayhew.  Here is a photo of the church in Wittenberg.

Marie Birner was the daughter of Heinrich and Susanna (Lehner) Birner of Wittenberg.  A post was published a while ago titled, Birner Hotel – Wittenberg, which told the story of this Birner family.  As the title of that story says, one of the enterprises operated by the Birners was a hotel.  Here is a photo of that hotel which also shows its close proximity to the Wittenberg church.

1904 was an exciting year for Wittenberg.  St. Paul’s Lutheran Church had recently become an official congregation and called their first pastor.  Also, July of 1904 was the time when the railroad had been completed and trains started rolling through town.

William Mayhew is more of a mystery.  The St. Paul’s Lutheran Church records say that William was from Bradford, Illinois.  The only indication I found about William’s parents was on William’s death certificate which says his father was from Rhode Island and his mother was from Illinois.   Another mystery which may be a factor in this story is the fact that Marie Birner was not included with the rest of her family in  the 1900 census from Wittenberg when she was 21 years old.  I was unable to locate her in other census records either.  One has to ask the question about how the 1904 bride and groom met each other.

One possibility is that these two met wherever Marie was living in 1900.  Another possibility is that Marie was in Wittenberg and a new young man by the name of William Mayhew came to town because he heard there was work to be had with the railroad.  Regardless of how they met, after they were married, William took charge of the Birner Hotel in 1906 as was reported in the Perry County Sun in a May 31, 1906 article which said the following:

“W.R. Mayhew of Wittenberg took charge of the Birner Hotel at that place last Monday.  The hotel will still be known as the Birner Hotel, but will be under the management of Mr. Mayhew.” 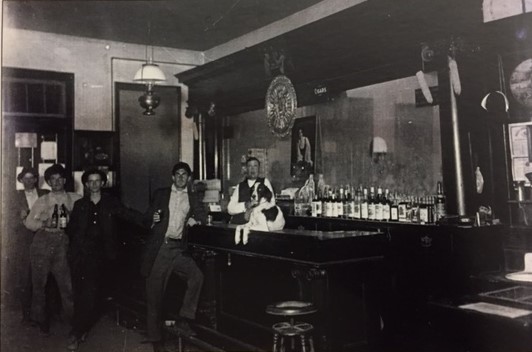 Here is a photo of the outside of that tavern.

This building was incredibly close to the railroad tracks.  One can only imagine what it sounded like and how it must have shook when a train was passing through.

I could not resist.  After seeing the photo of the dog in the bar, I decided to do a search for “a dog walks into the bar”.  I was looking for a good joke.  By the way, I found a few good ones along with some really bad ones.  In the process, though, I found this video, and I just had to share it here.  It’s a clip from a Jim Henson movie which was titled “Dog City”.  (Sorry about the ad at the beginning)

When William filled out a draft registration form in 1918, he gave his occupation as a livery man.  Here is that form.

The 1920 census shows the Mayhew family still living in Wittenberg, but William’s occupation was then listed as “auto service”.  Here is an image of a portion of that census record.

I have this sneaking suspicion that despite the fact that Marie is shown on this census as having no occupation, that the Mayhews are living in the Birner Hotel and she is running the place.  Her father, Henry is listed as a boarder.  Marie’s mother had died in 1911.  The other boarders were all working at the swing factory.

We see that the Mayhew family must have moved to Cape Girardeau by 1930 because the census for that year shows them living there and William is listed as a commercial salesman for a grocer company.  It was that year that William died.   His life must have come to a tragic end.  His death certificate indicates that the cause of his death was a gunshot to the brain and uses the word homicidal. 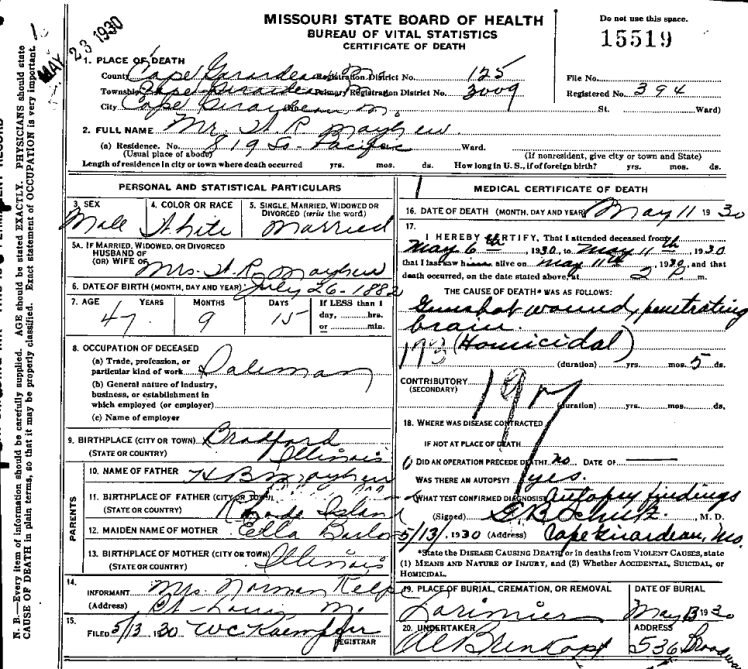 Marie died in 1957 at the age of 78.  Both William and Marie are buried in the New Lorimer Cemetery in Cape Girardeau.  Here are their gravestones. 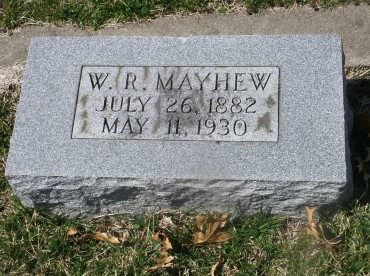 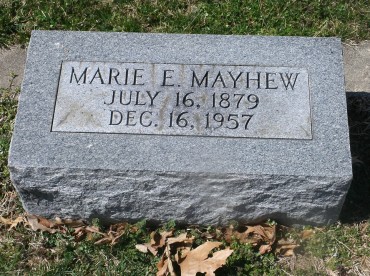 One more thought.  I cannot help but go back to that wedding that took place on July 12, 1904 and imagine what it would have been like if during that ceremony, those folks in attendance may have heard a train go through Wittenberg for the very first time.  I don’t know that it happened, but I suppose it could have.

3 thoughts on “Mayhew, the Wittenberg Barkeep”