It is the 116th birthday of Clara Weseloh, who was born on Saturday, October 12, 1901 in Jacob, Illinois.  She was baptized at Christ Lutheran Church in Jacob.  Her parents were Johann and Anna (Luedemann) Weseloh.  Although she was born across the river in Illinois, most of her life was spent in Missouri.  Let me attempt to tell you her story.

Clara’s father died of pneumonia when she was just four years old.  When she was 11 years old, her mother remarried.  Her mother’s second husband was Friedrich Oetjen.  This was Friedrich’s third marriage, so Clara had several step-siblings.  When Clara was 18 years old, she married August Fritsche.  They were married on February 15, 1920.  Here is their wedding photo.

Now let me bring you up-to-date on who August Fritsche was.  August was born in Missouri.  His parents were Robert and Magdalene (Darnstaedt) Fritsche.  Here is a photo of August’s parents.

Robert had been a member of Immanuel Lutheran Church in Altenburg, but when he married Magdalene, who was a member of Trinity Lutheran Church, they became members there for a while after their marriage in 1888.  August was their oldest child, born on February 1, 1889.  August probably does not remember much about living in Missouri because by the time he was three years old, the family had moved to Degognia, Illinois in Jackson County, not far from Jacob.  In 1891, his father became a member of Christ Lutheran Church in Jacob.  In 1903, August was confirmed at that church.  Here is his confirmation photo.

I have access to quite a few photos of August and his family.  Here is one of the Robert Fritsche family including several of their children.  August is standing on the left.

Here is a photo which includes a few of August’s brothers.  Everyone in the picture is wearing a hat. 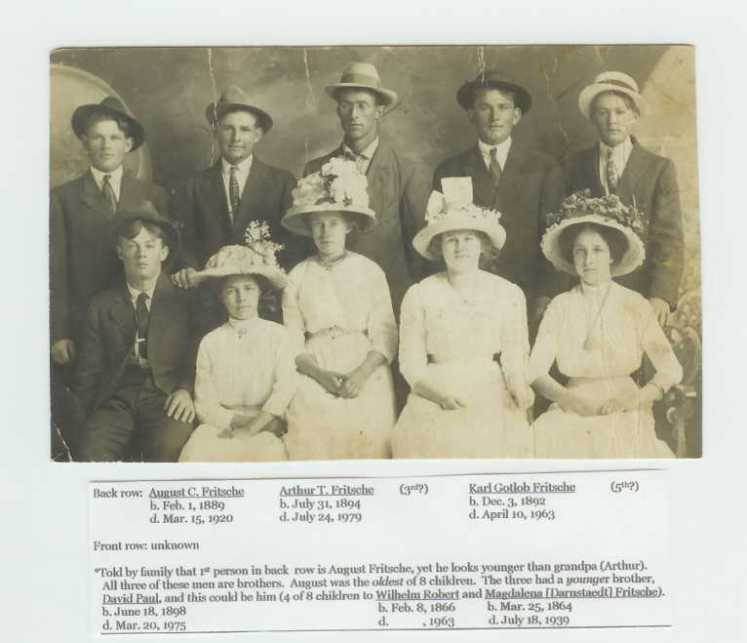 Next, we have a photo taken with August standing next to an automobile.  Pictures like this sometimes help to identify when a photo was taken if the photograph has no identifying facts written on it.  Maybe more people should take photos next to their cars to help future generations date the photographs. 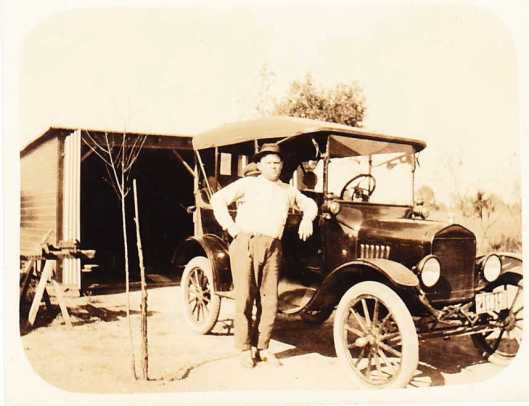 It wasn’t long after their marriage that tragedy struck this young couple.  August died as a result of appendicitis on March 15, 1920, exactly one month after he was married.  He was just 31 years old at the time of his death.  This left Clara as a widow.

I do not know the reasons why Clara managed to get across the river into Perry County, Missouri, but in 1922, she remarried there.  Her second husband was Martin Hecht and she was married at Trinity Lutheran Church in Altenburg.  She was now 20 years old, and Martin was 23.  Martin’s family was discussed in a previous post, Elmer’s Grandma and Grandpa.  His parents were Benjamin and Margaretha (Stueve) Hecht.  The wedding of Clara and Martin took place on February 27, 1922.

Clara and Martin had ten children.  Two of those children up until recently were docents at our museum.  One of them was Elmer Hecht who died about a year ago.

The other is Florence (Hecht) Gruenwald, who still occasionally works at the museum and has been a faithful supporter of our historical society throughout the years.

I have been present when Florence has told the story of how her younger sister, Margarite Ann, died from scalding after accidentally falling into a tub full of boiling water.  It is a horrendous story…..one that has stuck in her memory all her life.

This post tells the story of two kinds of families.  The Fritsche family took lots of photographs (or had them taken) which have been preserved over the years and shared with others.  The Hecht family has practically no photos available for me to use.  I am guessing that not many were taken in the Hecht family.  For obvious reasons, I prefer the ones that have lots of photos.  Someday, people may complain about how I preserved my photos.  I have tons of digital photos, but hardly any that you can hold in your hand.

I encourage you to do things to preserve your family’s history for future generations.

3 thoughts on “She Gets the Hecht Out in Perry County”