Today would have been the 117th anniversary for Theodore and Magdalena Catherina Hoffstetter.  Now, if I have my German right, the word, “hof”, means farm or farmyard.  Lena’s maiden name was Ochs, which I believe means ox, although around here, this name is pronounced with a long “o” sound.  Thus the title.

One thing that is common about the Hoffstetter and Ochs families is that they both were said to have spent some time in Illinois.  The Hoffstetter name entered Perry County around 1860.  Theodore’s father, Christian Hoffstetter, married Emilie Gruenwald  in 1861 at Immanuel Lutheran Church in Altenburg.  Here is a photo of Theodore’s mother, Emilie.

The church records say Christian was a farmer from Illinois.  Theodore was born on July 30, 1872.  His father died when Theodore was just five years old.  The 1880 census shows the Hoffstetter family living in Brazeau Township in Perry County.

By the time 1900 rolled around, we see some interesting changes which bring together Theodore and Lena.  First, Theodore’s mother, Emilie, married a second time to Heinrich Neupert.  However, before 1900, he also died, making Emilie a widow once again.  Emilie must have moved to Perryville, because we find her there in the 1900 census, along with her son, Theodore.  Names are not spelled correctly in this entry.

There was also a boarder by the name of Joseph Jacob living in that household.  Also, at this time, we find Theodore listing his occupation as carpenter.

Meanwhile, we also find Lena Ochs living in Perryville in 1900.  Here is where we find her in the census for that year.

Lena was a servant in the Louis Doerr household.  Notice it says she was born in Illinois.

It was very late in 1900 when Theodore and Lena were married.  Here is their marriage license.

They were married at Immanuel Lutheran Church in Perryville.  Here is their wedding photo.

Between 1902 and 1918, this couple had seven children.  Then in 1919, Lena died of tuberculosis.  Theodore remained single until 1930 when he married Clara (Vogt) Muench.

I have managed to find several photos of the Hoffstetter and Ochs families.  I have chosen to put them into a gallery with captions.  You can click on them to see a larger image.

Theodore was a carpenter in Perryville for many years and worked for the Kiefner Lumber Company.  He died in 1955 and was buried in the Immanuel Lutheran Cemetery in Perryville.  His second wife, Clara, had preceded him in death in 1949.  Here are the gravestones for Theodore and Lena. 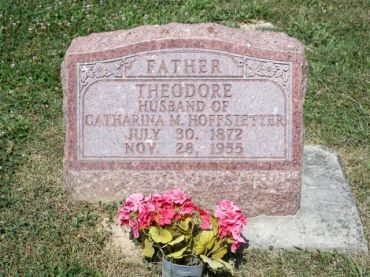 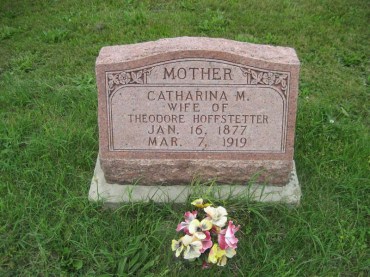 I know two men who are tied to the Hoffstetter family from Perry County.  One is Rev. Gary Hoffstetter, who has retired from serving a Lutheran church in Gordonville, and is now living in Jackson.  Gary was a classmate of mine at Lutheran High School North in St. Louis.  Also, Rev. Dr. Fred Baue of St. Louis has told me that he has Hoffstetter ancestors.  He is a pastor, author, musician, and serves on the board for Concordia Historical Institute.  I know both these gentlemen are attached to the Hoffstetter family, but I am not sure how they are attached.  Maybe they will tell me someday.

2 thoughts on “An Ox Enters the Farmyard”