My schedule is pretty full for tonight and tomorrow…..choir practice tonight, men’s Bible class and a museum board meeting tomorrow morning, and a trip to Perryville tomorrow afternoon.  So I decided to sneak in a story today.

It just so happens that I found another birthday that took place a long time ago in Lamstedt, Hannover, Germany.  Before I tell you about today’s character, let me remind you about a previous Gerd from Lamstedt.  Just a few days ago, I wrote the post titled, Bicentennial Birthday.  In that post, we learned about Gerd Steffens who was born 200 years ago.  This was his baptismal record.

Another Gerd was born on this day in 1844 at the same church that Gerd Steffens had been born.  This Gerd was Gerd Mangels.  Here is his baptism record from Lamstedt.

This record says that Gerd was the son of Herman Mangels.  His mother’s name is a little harder to read.  But let’s backtrack a little.  Herman Mangels was born in 1804, and we even have that baptism record.

His parents were Johann and Sophia (Stelling) Mangels.  Stelling is another Perry County  name.  I was able to also locate a record for Herman’s marriage in 1831.

His bride’s name appears to be Anna Hamann.  A girl by the name of Anna Hahmann was baptized in Lamstedt in 1810.  Here is that record.

She was the daughter of Mattheis and Metta (Lührs) Hahmann.  If you look once again at Gerd Mangels’ baptism record, his mother’s maiden name does appear to be Hamann (Hahmann).

When Gerd was 21 years old, he sailed to America aboard the ship, Constantia, in 1865.  That ship landed at New Orleans, Louisiana.  Here is the passenger list showing Gerd.

On the same list you will see Claus Steffens.  I will get back to him.

After Gerd Mangels arrived in Perry County, he married Metta von Glahn.  That marriage took place on April 19, 1870 at Concordia Lutheran Church in Frohna.  Here is their Perry County marriage record which is barely readable.

Thanks to the infamous “Koestering Hole”, there is no church record for this marriage.  Here are photos of Gerd and Metta (Martha).

Gerd and Metta had eight children.  Their first child was a girl, and that was followed by 7 straight boys.  Gerd died in 1919 at the age of 75; Metta died in 1936 at the age of 85.  They are both buried in the Concordia Lutheran Cemetery in Frohna. 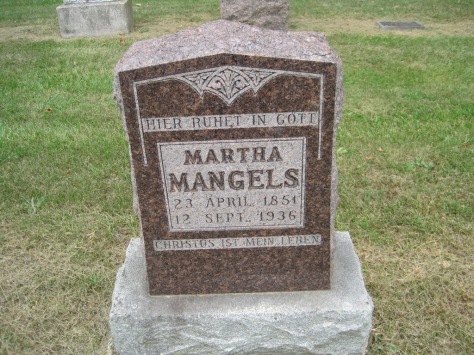 I think it is safe to say that most of the Lamstedt immigrants to Perry County ended up in the Farrar area or on The Ridge, but the Mangels did not follow that pattern.

I cannot end this story without pointing out another puzzle and a possible answer to it.

In the passenger list for Gerd Steffens, there is a girl by the name of Meta Reese.  In the post about Gerd Steffens, I suggested that she was a Steffens.  I think I now know how that happened, but you can decide if I am right or not.  First of all, here is a baptism record for Meta Reese from the church in Lamstedt.

I think this is the Meta Reese that was on that passenger list.  Notice that her mother was a Mangels.

Now remember that there was a Claus Steffens on board the same ship as Gerd Mangels.  Here is a Perry County marriage record for a wedding that took place on January 2, 1868.

I cannot find anyone who has translated the bride’s name on this form as Reese, but that is what I think it says.  This marriage also took place during the time period of the “Koestering Hole” when Rev. Koestering did not record marriages or deaths in the Trinity or Concordia church books.  You can see J. F. Koestering shown on this record as the pastor.  I think it is almost certain that this marriage took place at Trinity in Altenburg.  My main reason for being so certain is the fact that there was a birth of a baby by the name of Anna Steffens born in November of 1868.  Here is an image of that record.

The father is shown as Cl. Steffens and the mother as Meta.  Gerd Steffens and his daughter, Margaretha, are two of the sponsors.  At this point Metta is Metta Steffens.  Now we return to the marriage record that was shown in the post a few days ago.

Anyway, that’s my theory, and I’m sticking to it until someone can prove me wrong.

One thought on “Another Gerd from Lamstedt”