A certain genealogy problem has been plaguing me for a while.  There are two “clans” of Lueders families in our German Family Tree.  (By the way, Lueders is pronounced Lee-ders around here).  One Lueders clan centers around Frohna, Missouri, and the other in Wittenberg.  There are some indications that the two Lueders clans are related, but I never could find any official documentation.  Today, I will provide what I consider to be proof that there is quite a close connection between these two families if you go back to Germany for records.

First of all, there is an August Lueders that shows up rather early in East Perry County history.  He is said to have come to America in 1850.  This excerpt from an entry in Goodspeed’s History of Southeast Missouri gives us a few clues.

August’s story was told in this blog in the article titled, Frohna Entrepreneur.  The church records of Concordia Lutheran Church in Frohna show August marrying Anna Marie Roth on November 22, 1855.  Rev. Christoph Loeber was the pastor of that church at that time.  In his record, Rev. Loeber indicates that August was the son of Heinrich and Augusta nee Sarrazin Lueders.  Pastor Loeber had the habit of giving information about a couple’s parents when he wrote his church records.  This habit turns out to be very helpful to people doing family research.  August Lueders eventually became the proprietor of a successful general store in Frohna.  Here is a photo of the family of August Lueders.

Secondly, there is William Lueders.  There is also an entry in Goodspeed’s History about William.

The first church record we find of William is his marriage to Theresia Lehner on November 29, 1860.  This record can be found in the records of Immanuel Lutheran Church in New Wells, Missouri.  The pastor of that church was Rev. C.W.R. Frederking.  It apparently was not his habit of recording the names of the parents of couples who were getting married, so we do not have evidence here that William is related to August Lueders.  Later, William moved his family to Wittenberg, Missouri where he, too, like August Lueders, was the proprietor of a successful general store.  Here is a photo of William and Theresia Lueders.

The connection between August can be found in the church records of the Neuenfelde parish in Germany.  I found the baptism record for August in this church’s records on Lori Adams’s family history on Ancestry.com.  He was born on February 11, 1836.  Here is an image of that record.

I searched the same records and was able to locate the baptism record for Albert Wilhelm Lueders.  He was born on October 28, 1839.   That is the birthday you can find on both his gravestone and on his death certificate.

Ancestry.com provides an English transcription containing pertinent information concerning these records.  I am going to place the transcriptions for both these baptism records side by side. 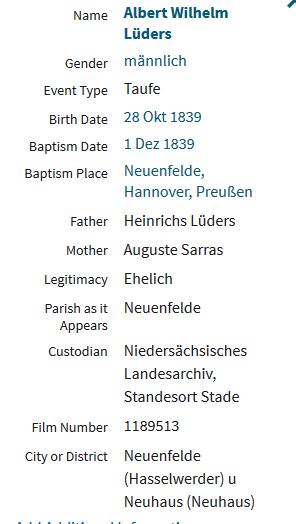 Even though there are slightly different spellings of some names, I think there is enough evidence here to indicate for sure that August and William Lueders were brothers.

I was also able to find another child born into this family that was baptized at this parish.  Her name was Johanna Marie Lueders.  Here is an image of her baptism record.   She was born on October 18, 1837.

And here is the transcription. 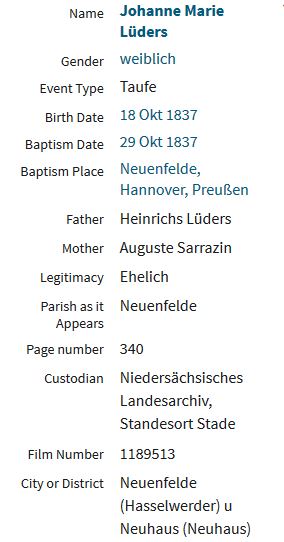 There is still an unsolved mystery about who might have been August’s older sibling as indicated in the Goodspeed excerpt above.

It seems that the Lueders family would later move to Lamstedt, Germany after having several children in Neuenfelde.  We find this baptism record for another child in the Lamstedt parish records.  This baptism took place in 1845.

Here is the transcription. 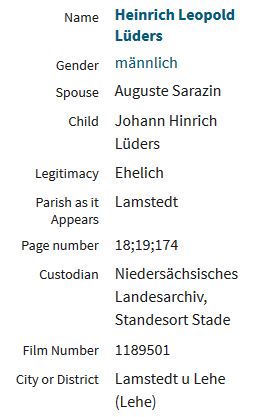 I was snookered for a while because I found an obituary for William Lueders that said he was from Lamstedt.  For a while, I could not find his baptism record because I was looking for it in the Lamstedt records.  I was not successful until I looked at other parishes.

By the way, here is a map showing where both Neuenfelde and Lamstedt are located.

Although I am thrilled to find the truth in this matter, I also have made some more work for myself.  I am writing a book in which I already claimed that Paul Lueders from Frohna did not know of any relation to Otto Lueders from Wittenberg.  Now I’m going to have to do a rewrite.

3 thoughts on “The Lueders Brothers”