Selma Gemeinhardt must have been a pretty amazing woman.  During her life, she gave birth to 14 children.  Two of them died as infants.  Her home in Wittenberg must have been quite the active place, with the likelihood of having a dozen children all living in that house at the same time.  She gave birth to all 14 of these babies in a span of 21 years.  Look at this list of years in which her babies were born.  The ones with asterisks died as infants.

Lest I ignore him, the father in this family was Friedrich “Fritz” Gemeinhardt.  Fritz spent most of his life working at the flour mill in Wittenberg, and when it closed, he worked at the swing factory.

Selma’s maiden name was Nennert.  She was born in Wittenberg where her parents ran the Nennert Hotel.

The Gemeinhardt house was located not far from downtown Wittenberg along Highway A and just across the road from where the public school stood.  It is labeled with a #10 on this aerial photograph. 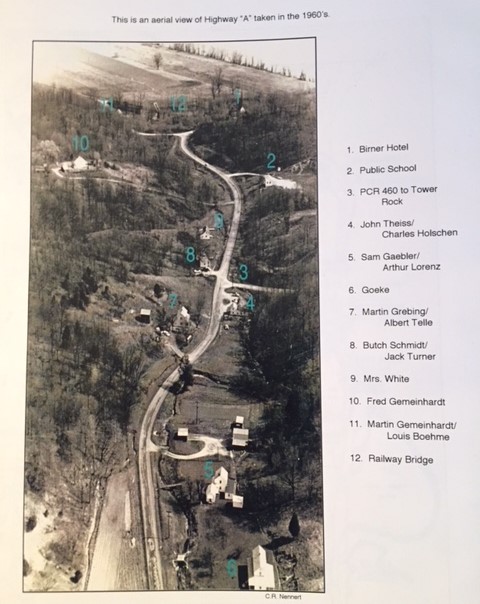 On this day, August 15, in 1903, the last of the Gemeinhardt children was born in Wittenberg.  His name was Clarence Leo Gemeinhardt.  One thing was unique about Clarence.  The Lutheran church in Wittenberg, St. Paul’s Lutheran, was officially established in May of 1903.  Clarence was the only Gemeinhardt to be included in the church books of St. Paul’s.  He was the fifth child to be baptized at that new congregation.  Below is his baptism record.

Underneath the sponsors there is some writing in German.  I’m putting an enlargement here in hopes that somebody can tell me what those words say.

Even though Clarence is the only one to be included in the St. Paul’s books, it is likely that some of the other Gemeinhardts were baptized in that church building.  That church was a branch of Trinity Lutheran Church in Altenburg for many years and services were held there quite regularly before it became St. Paul’s.  The other Gemeinhardt baptisms are recorded in the Trinity church books.

It is somewhat likely that there were a dozen children in the Gemeinhardt house when Clarence was born.  The oldest, Charles Joseph, would have been 20 years old, and I know he was not married until later.  The first census in which we find Clarence is the 1910 census from Wittenberg.  He is 7 years old, and six siblings still live in that household.

Ten years later, Clarence can still be found living with his parents in Wittenberg.

In this 1920 census, we see that both Clarence and his father were working at the swing factory.

Between 1920 and 1930, Clarence probably attended Concordia Teachers College in River Forest, Illinois.  In the 1930 census, we find Clarence is a private school teacher in Tacoma, Washington.  He is 22 years old and still single.

In this 1929 city directory for Tacoma, we discover that Clarence was a teacher at Zion Lutheran School.  Zion Lutheran Church is one of the oldest Lutheran congregations in Washington, being established in 1890.

In 1934, Clarence married Helen Erna Paul in Tacoma.  Here is that marriage certificate.

I am thinking that this marriage did not last long.  I found evidence that a Helen Erna Paul was married to another man later.  Also, Clarence is shown later as having a wife by the name of Jane.  I was unable to find any .

documentation for any other marriage for Clarence.

Clarence also may not have remained a Lutheran teacher for very long either.  In a 1938 California voter’s registration record, we find Clarence living in Los Angeles.  It says he was a cabinet maker.

Later, in 1951, we find Clarence in a Long Beach, California city directory.  He is said to be an engraver.  He is also shown to have a wife named Jane.

Clarence died in 1984.  He is buried in Forest Lawn Cemetery in Long Beach.  His wife, Jane, died in 1988 and she is buried with Clarence.  She was apparently about 17 years younger than Clarence.

Clarence’s gravestone says he was born in 1904.  I found a World War II draft card that also had this 1904 date for his birth.  However, there are several other documents showing that he was born in 1903.  The crucial one, in my opinion, is his baptism record from St. Paul’s in Wittenberg.

I must admit, I couldn’t resist researching the life of Clarence and writing his story because the last few days, I have been telling the story of his birth in the fictional book I am writing about Wittenberg as it existed in 1903.

Another interesting fact about this story is that despite 14 children being born into the family of Fritz and Selma Gemeinhardt, the only two who are buried in the St. Paul’s Cemetery in Wittenberg are Fritz and Selma.  This is indicative of the demise of that little town after more flooding started happening there.  Here are the two Gemeinhardt gravestones.