When you look at certain branches of the Bachman family, you find many, many “Bachmen” and very few “Bachwomen”.  Today, one of those “Bachmen” would have been celebrating his birthday.  Friedrich Edward Bachmann was born on August 30, 1860.  He was baptized at Salem Lutheran Church in Farrar.

Edward’s parents were Henry and Ernestine Bachmann.  A while back, Wayne Schuessler wrote a post about Henry and Ernestine that was titled Life on the Creek.  If you look in our German Family Tree, you will find that Edward was the third of ten children in this family.  The first child is just listed as a male Bachman who lived just 7 days.  The only record in any church book is a death record for 1857 in the Grace Lutheran Church books in Uniontown.  Salem Lutheran Church had its first worship service in the spring of 1859.  Here are some sentences from a history of Salem.

Henry Bachmann is listed as an original member of this congregation.  By the way, the Friedrich Boehme mentioned in yesterday’s story is included in this list also.  Below was  the first church constructed by this new congregation in Farrar. 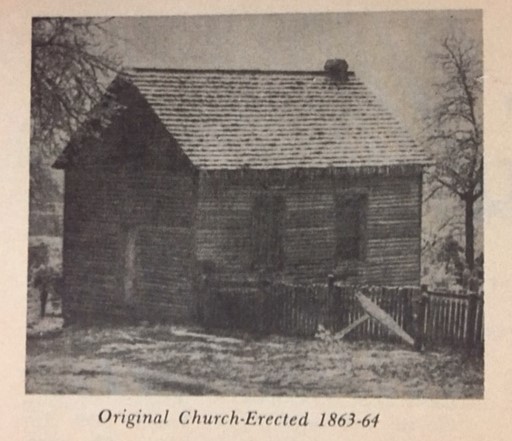 As you can see from the dates shown here, Edward was born too early to have even been baptized in their first church.

Two of Henry and Ernestine’s children died in infancy, so that leaves eight other children.  Of those eight, only one was a female, and in that case, the girl was taken into their family as an orphan and later took the name of Bachmann.

The first census in which we find Edward was the 1870 census.  The Bachmanns are included in the Brazeau Township reckoning.

It is in the 1880 census that we find the name of Rosalie Upton.  This census was from Salem Township.

In this 1887 record, we see Rosalie being confirmed at Salem using the name Bachmann.

An 1876 Missouri census for Salem Township shows a John Upton with a daughter named Rosa.

Something must have happened to this family to cause Rosalie to be an orphan in 1880.  Rosalie married Alwin Magwitz in 1893.

I am thinking that by the time 1880 rolled around, Ernestine must have really enjoyed having a girl around that house full of boys.

Edward married Mathilde Eggers on April 26, 1888.  They were married at Trinity Lutheran Church in Altenburg.  Here is the Trinity record of their marriage.

The text for their marriage was the one used for my marriage, “As for me and my house, we will serve the Lord.”  Here is the marriage license for this couple.

We have this wedding photo of Edward and Mathilde.

If you remember back when I wrote posts on these topics, this photograph exhibits Mathilde wearing a black and white dress/veil.  You also find Edward with a suitcoat just buttoned at the top.

The first census in which we find Edward and Mathilde married was the 1900 census.  That census for Salem Township is almost illegible, so I won’t show it.  Here is the 1910 census.

Throughout his life, Edward was a farmer near Farrar.  This census shows six children, four of which are male.  The last census to find Edward was the 1920 census.

Later in 1920, Edward died.  Here is his death certificate.  He died three days before his 60th birthday.

Mathilde can be found in two more censuses.  In both she was living with her son, Ernst Bachmann.  First, the 1930 census:

This 1940 census shows that this family blessed Mathilde with four grandsons before two granddaughters showed up on the scene.  Mathilde died in 1941, one year after this census.  This is her death certificate.

Edward and Mathilde are both buried in the Salem Lutheran Cemetery in Farrar, Missouri. 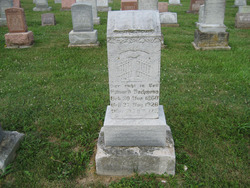 If you look at the spouses of Edward and Mathilde’s children you find these names…..Koenig, Meyer, Mangels, Hadler, Boehme, and Steffens.  Another Hall of Fame list for the Farrar/Crosstown area.

One thought on “Not Many Bachwomen”