Yesterday’s story was about a butcher, so when I found a birthday boy who was a butcher today, I figured it was a story I had to tell.  As it turns out, this story led me all over the place.  Before you get to the end of this story, you will see Lutheran church records from congregations in Altenburg, Frohna, New Wells, and Pocahontas in Missouri, as well as Jacob in Illinois.  In addition, plenty of mention will be made of Wittenberg.

Henry Reisenbichler was born on January 22, 1869 and baptized at Immanuel Lutheran Church in New Wells.  He was the son of Gottlieb and Anna (Putz) Reisenbichler.  Below is Henry’s baptism record.

Henry’s future wife was going to be Susanne Foelber.  She was born on December 1, 1870, but I could not find a baptism record for her.  She was the daughter of Moritz and Anna Maria (Plicheis) Foelber.  Susanne was the sister of Herman Foelber, who was the main character of the post, Teacher Foelber.  When Susanne died, her death certificate said she was born in Wittenberg.

Let me backtrack a little.  Anna Maria Plicheis, Susanne’s mother, was first married to Johann Kieninger.  Their marriage record is found in the Concordia, Frohna books, but that record states that both the bride and groom were from Cape Girardeau County.

After Johann KIeninger died, Anna Maria married Moritz Foelber.  That marriage took place at Trinity Lutheran Church in Altenburg.  In the 1870 census, Anna Maria was reported as being from Austria, which is the home country of many of the Lutherans at the New Wells church.

Anna Foelber is found in the 1876 Missouri state census without a husband, so Moritz probably died in the interim.  I have the suspicion that Anna decided to move her family close to the Austrian area around New Wells sometime after that 1876 census.

Henry and Susanne were married on May 15, 1898 at Zion Lutheran Church in Pocahontas, Missouri.  That congregation was a relatively new one, and Henry and his father were two of the charter members.

Here is the marriage record for Henry and Susanne from the Zion Lutheran books.

I also included another marriage that took place a week after this wedding because it was the marriage of Henry’s brother, Alois.  The photos below must have been taken when Henry and Susanne were quite young. 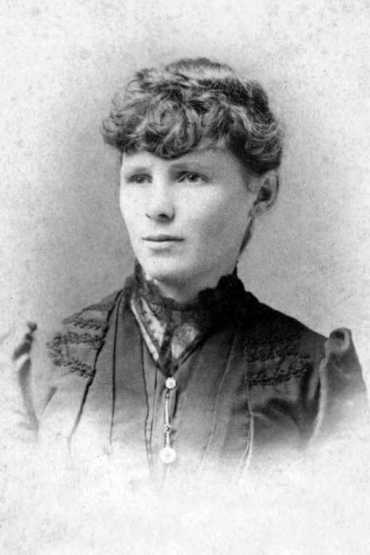 Henry and Susanne had two sons, Erwin and Harold.  The 1900 census from the village of Pocahontas shows Henry and Susanne with no children yet.  Henry was a hotel and restaurant keeper.  They also had a boarder by the name of Eli Meyer who was a stock trader.

When the 1910 census was taken, we see several changes in this family.

First of all, their first son was listed.  The second son would be born during the year of this census.  Second, Henry now had the occupation of a butcher and had his own shop.  Finally, there was an 18 year-old girl by the name of Viola Nennert who was an orphan living with them.

Viola was baptized at Christ Lutheran Church in Jacob, Illinois.  Here is her baptism record.  It is in two images.

Viola’s parents had both died around 1899, leaving several children as orphans.  Those children had been brought by their mother to Wittenberg after her husband’s death, and then she died.  These orphans were farmed out to a few homes in Wittenberg, including the Nennert Hotel which was run by Viola’s aunt.  Now in 1910, Viola was living in Pocahontas with the Reisenbichler’s.  It is yet another connection in this story with the city of Wittenberg.  By the way, C.R. Nennert, who was a Lutheran teacher in Indianapolis, was Viola’s brother.

Before the 1920 census, Henry moved his family to Jackson, Missouri.  I will not show the image, but it says Henry was a merchant, and it says that his industry was “restaurant”.  Then in the 1930 census, we find this family still in Jackson with Henry’s occupation being a manager of a pool room.

Henry was still managing a billiard parlor when he was 71 years old as recorded in the 1940 census.  Henry died in 1947; Susanne died in 1955.  They are both buried in the Cape County Memorial Park in Cape Girardeau.

One theme that is becoming clear to me the more I study the history of this area is that there is an unexpected (at least to me) connection between Wittenberg and Shawnee Township across the Apple Creek in north Cape Girardeau County.  The Foelber and Nennert connections from this story are some examples.  I also have written about several folks with the Lehner name in their family histories ending up in Wittenberg, such as the wives of William Lueders and Henry Birner.  The Kieninger name mentioned in this story would later become another Wittenberg name.  I find this connection very interesting.

One other thing I would like to mention today is that there is now a business in Pocahontas, Missouri that is called Reis Meat Processing Company.

I was informed this morning that Reis is a shortened form for Reisenbichler.  I had not known that until I was enlightened by a local resident this morning.  I do not know what ties that business has with an old butcher from Pocahontas, but I am guessing there is one.  Also, remember that yesterday’s story told of Lebrecht Schmidt having a butcher shop in Pocahontas at one time.  It’s what made me perk up when I saw that Henry Reisenbichler from Pocahontas, today’s birthday boy, was a butcher.  I could not resist choosing him for today’s post.

“On Tuesday, the 22nd, we again saw into the tops of the highest trees.  The banks of the Mississippi were very steep, and they are made up of various layers of earth.”

One thought on “Butcher to Billiards”