The story today begins with some names that might be considered celebrities in early Lutheran Church-Missouri Synod history.  Those surnames were Graebner and Schaller.  I am going to use some entries from the Lutheran Cyclopedia to describe the careers of a few of these men.

First, we start with Rev. Johann Heinrich Philip Graebner.  Here is what we find for this man in Lutheran Cyclopedia.

We have this photo of Rev. J.H.Ph. Graebner. 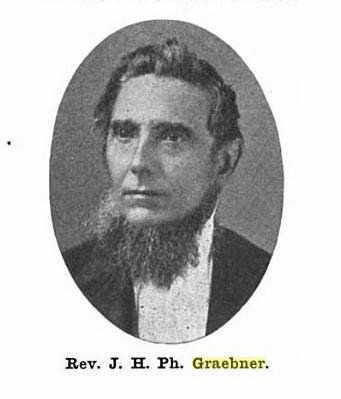 One of Rev. J.H.Ph. Graebner’s sons was August Lawrence Graebner.  He, too, was active in early Lutheran history in America and had very impressive credentials.  His entry in Lutheran Cyclopedia is shown below.

Rev. August Graebner is shown in the photo below.

Now I will switch over to the Schaller surname.  The first Schaller I will name is Johann Michael Gottlieb Schaller.  This man also earned a place in the Lutheran Cyclopedia, which is noted below.

Here is an image of a photo that hangs on a wall at Old Trinity Lutheran Church in St. Louis showing Rev. Schaller.

Rev. Schaller had a daughter named Anna Euphrosine Schaller, and she married Rev. August Graebner, uniting these two famous surnames.  Here is a photograph of Anna.

Before I move on, let me note that the above-mentioned theologians were likely qualified to be designated as Doctors of Divinity.  That title is sometimes abbreviated D-Div and sometimes DD.  I might also note that none of the above named personalities have yet to be tied into East Perry County……yet.

August and Anna Graebner had several children, the last being a girl by the name of Edna Graebner.  She is going to be the one who finds a spouse with Perry County connections.  She did not find a spouse with a DD.  Instead she found a Dede.

She is also found in St. Louis ten years later in the 1910 census.  By that year, her father had died, so Anna is shown as a widow who is the head of the family.

Now, we move to Edna’s future husband.  His name was Rudolph Dede. He is today’s birthday boy, being born on May 29, 1890.   Rudolph was the brother of another character who was the focus of a previous post titled, Learning Latin from a Blacksmith’s Son.  He was, as that title implies, the son of a blacksmith.  His parents were Carl and Elizabeth (Winter) Dede.  When Rudolph was born, the Dede family was living in Farrar, Missouri, and he was baptized at Salem Lutheran Church.  I am not in Altenburg these days, so I am unable to show you a baptism record.

By 1900, in the first census listing Rudolph, the Dede family was living in Egypt Mills, Missouri, which is in rural Cape Girardeau County.  They were found living in the Randol Township.

I was unable to find Rudolph in the 1910 census, but in 1917, when his World War I draft registration was completed, he was living in St. Louis.  He is described as a foreman in an auto department.

Rudolph was single in 1917, but by 1920, he was married to Edna Graebner. It is most likely that these two met in St. Louis.  Maybe Rudolph’s brother, who studied for the ministry at Concordia Seminary, was a matchmaker for this couple.  I was unable to find a marriage record.  The 1920 census shows Rudolph and Edna living in St. Louis, but the entry is so hard to read, I cannot even tell what his occupation was.  I will show just a portion of that record.

Rudolph and Edna did not remain in St. Louis.  By the time of the 1930 census, they were living closer to where Rudolph was born and raised, in Cape Girardeau.

In that census, Rudolph was a blacksmith who had his own shop, so he followed in his father’s footsteps.  Then in 1940, Rudolph was a watchman for a chicken hatchery in Cape Girardeau.  I am guessing that the amount of business a blacksmith might get diminished by the 1930’s and 1940’s.

Right underneath the entry for Rudolph’s family, you will see his father and mother.  When Rudolph’s World War II draft card was completed in 1942, he once again had a different occupation.  He was working for the Upper Mississippi Towing Corporation.

Rudolph died in 1971; Edna died in 1973,  They are both buried in the Cape County Memorial Cemetery in Cape Girardeau, Missouri.

Many Lutheran pastors came out of the Graebner and Schaller families.  A few even came out of the Dede family.  Edna Graebner, on the other hand, did not find a husband with a DD behind his name.  However, she did manage to find a Dede.