Today was Ida Mina Hooss’s birthday.  Ida was born in Perryville, Missouri on June 24, 1877, making today her 142nd birthday.  She was the daughter of Thomas and Catherine (Cadenbach) Hooss.  Her father, over the years, was a hotel keeper and merchant in Perryville.  Ida was baptized at Immanuel Lutheran Church in Perryville.  Below are photos of Ida’s parents. 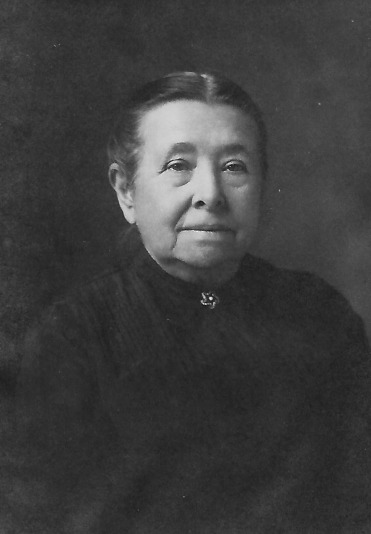 We find Ida in the 1880 census for Perryville.  She was shown to be 4 years old but I am thinking that she was just 3.

Included in the above entry was a girl who is shown to be adopted by the name of Florence Verschelden.  I know that Florence’s father died not long before this 1880 census.  I did a brief search to find out what connection there might be between the Hooss and Verschelden families.  The only possible connection I could find was that Thomas Hooss and Florence’s father, Peter Verschelden, both served in the Union Army during the Civil War, but I do not think they were part of the same unit.  Catherine (Cadenbach) Hooss, Ida’s mother, had a brother who was part of the Union Army during the Civil War also.  His name was Henry Cadenbach who was part of a cavalry unit during that war.  I know this seems to be getting off on a tangent, but I do this because I wanted to show this photo of Henry Cadenbach in his Civil War uniform that I found.  I find photos like this so rarely, that I just had to show it.

To Ida Hooss, this man would have been Uncle Henry.

I will show evidence later that Ida was part of the Class of 1893 at Perryville High School.  She apparently also attended Southeast Missouri Normal School in Cape Girardeau and Harris Teachers College in St. Louis.  I think Ida attended the Normal School in Cape Girardeau first in order to become a teacher.  She then took more classes later at Harris Teachers College to get a degree.  When we see Ida in the 1900 census, she is living with her parents in Perryville, and she is described as a school teacher.

Ida continued to be a teacher in a public school as is indicated in the 1910 census for Perryville.  She was 32 years old and still living with her parents.

The 1920 census shows a change of location for Ida.  She was then living in St. Louis.  She was living with her widowed sister as well as her late sister’s husband, Ashley McCauley.  Ida was still in the teaching profession.

Ida is later described as getting a degree from Harris Teachers College in St. Louis.  She received that degree in June of 1923. 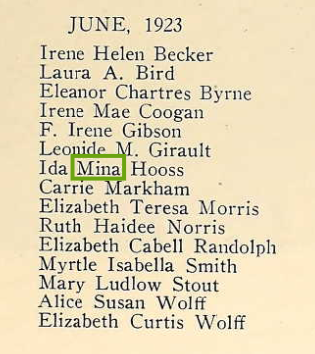 Harris Teachers College had the distinction of being the first school of its type to be run by a woman.  It appears that the entire list shown above is made up of women.

In the same year that Ida received her degree from Harris, she was included in a photograph showing an alumni group from SEMO Normal School who were teachers in St. Louis.  Ida is said to be in the picture, but your guess is as good as mine which one she is.

Maybe as a result of receiving the degree from Harris Teachers College, in the next census in 1930 shows Ida as not only an educator, but as a principal of a public school.

It is likely that Ida was one of very few women who were principals back in the 1930’s.  In those days, school administrators were almost exclusively men.  I may go as far as saying that in today’s day and age, the situation has flipped, with men being outnumbered by women in school administration.

The last census in which we find Ida was the one taken in 1940.  In that census, Ida was 62 years old and continued to be a teacher at a public school.

The 1930 and 1940 censuses show Ida as living on Waterman Ave. in St. Louis.  That address piqued my interest.  I attended my freshman year of high school at Lutheran High School Central in St. Louis.  That school was located at the intersection of Lake and Waterman.  That school must have been just a matter of blocks away from where Ida lived.  I found a recent photo of the building that once housed Lutheran High Central.  It is now the home of New City School.

I found several yearbook entries in the Perryville High School Yearbook known as the Tuba where Ida is especially mentioned as being a part of their Class of 1893.  In each case, she is pointed out to be a teacher in the primary department of St. Louis schools.  Here is one of those mentions that was in the 1933 Tuba.

It looks like Ida Hooss moved back to her hometown after she retired from the teaching profession.  She died in Perryville in 1967 at the age of 89.  We have her death certificate.

Ida is buried at the Home Cemetery in Perryville.

Ida Hooss never married.  I have known quite a few female teachers who never married.  I know there are both advantages and disadvantages to that situation.  One of the advantages is that these women love children, but do not have a family with children of their own.  What they do have is plenty of time to devote their lives to becoming outstanding teachers for the children entrusted to their care in school.

The term “schoolmarm” is often most associated with a single lady in a rural school who might be the school’s only teacher.  The stereotype of a schoolmarm is that she was a strict disciplinarian in her classroom.  I know Ida did her teaching in a rather urban area, so I guess I am stretching the definition to describe Ida as Miss Hooss – Schoolmarm.  I also have no idea what kind of disciplinarian she was .  What I am thankful for is the fact that I found a photograph of Ida Hooss which is shown below.  I am thinking that it may have been the photo used in her obituary.

One more thing:  I attempted to put the term “schoolmarm” into Google Translate to see what the German translation would be.  It came out Schulmarmelade.  That app said this word could also be translated as “school jam”.  It seems like a sticky translation problem to me.  Perhaps our friend, Lutz Backmann, in Saxony could be of help with this.