For one season, he was my coach.  I was a scrawny little guy who loved to play soccer, and I thought that I could be a kicker for the Concordia Teachers College football team.  I did just that.  The football program listed me as being 125 pounds, tied for one of the lightest players on the team.  And my kicking coach had his roots in Perry County, Missouri.  His name was Courtney Meyer.

I am writing his story today because this weekend, Courtney is receiving the Lifetime Service Award from the Concordia Alumni Association in Seward, Nebraska.  The list of his accomplishments demonstrates that Courtney is certainly deserving of this recognition.  The photo of Courtney shown below is being used in promotions for the awards banquet coming up.

Courtney is the son of Alvin and Paula (Kaempfe) Meyer.  He was born on April 9, 1943 and I am pretty sure he was baptized at Concordia Lutheran Church in Frohna.  He is born too recently for us to have those records to view here in our research library.  In fact, today I am entering territory I usually do not enter.  I am writing about a character who is still alive.  This will be one of the rare posts on this blog that does not contain a gravestone photo toward the end.  I almost always write about dead people.

There were 5 children in this Meyer family.  In order of birth, they were Imogene, Courtney, Pearline, Marvis, and Ritha.  Ritha was 13 years younger than her nearest sibling, so she is not seen in many of the childhood photos I got a chance to see.  Thanks to two of Courtney’s sisters, Imy Unger and Pearline Degenhardt, I have much information and several photos to show you today.  Here are three photos that show Courtney and his older siblings.  Remember, Courtney is the oldest boy in this family. 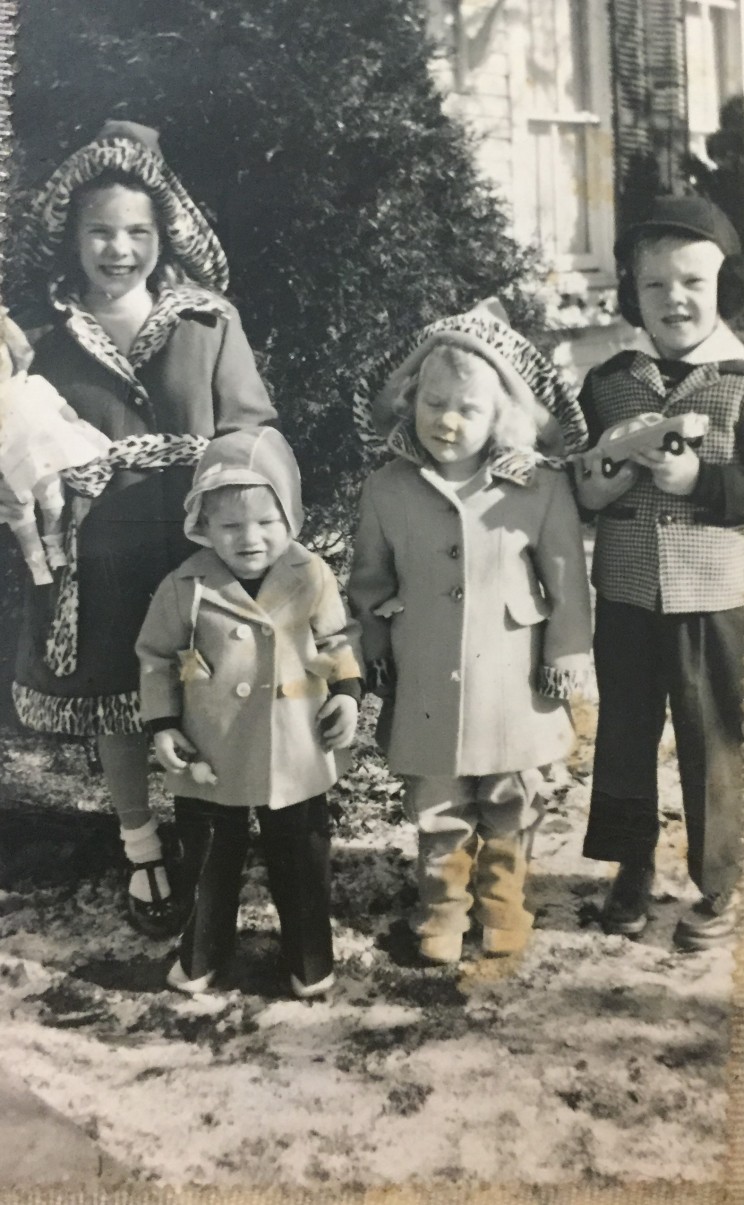 Courtney was involved in band, basketball, and baseball.  Imy and Courtney are in their Perryville High School Band uniforms in the photo below.

Imy did not tell me which instrument she played, but she said Courtney played the cornet and enjoyed playing “Taps”.  Two years later, we find Courtney once again in The Tuba.  This time he was in the 1961 graduating class.  Football was included in his list of accomplishments.  That would be the sport which became the biggest part of his career.

After graduating from high school, Courtney headed off to St. John’s Lutheran College in Winfield, Kansas.  Two years later, in 1963, he went a little farther north to attend Concordia Teachers College in Seward, where he graduated in 1965.  During his senior year at Seward, Courtney was named the Male Senior Athlete of the Year, playing both football and baseball.  His first teaching position was at Martin Luther High School in Maspeth, New York.  Then he spent a few years at Long Island Lutheran High School.  Courtney returned to Missouri to became a graduate assistant at Southeast Missouri State University where he received his Masters Degree.  He would then return to Seward where he was a graduate assistant and a football coach at Concordia.  That is when he crossed paths with me.

In 1972, Courtney moved to Mayer, Minnesota where he served at the Lutheran high school located there.  He was football, track, and girls’ basketball coach during his tenure, and his teams achieved quite a bit of success.  In 1977, he was called back once more to Concordia, Seward to become the defensive coordinator for the Bulldog football team.  In 1984, he became the head football coach at Concordia University in Mequon, Wisconsin.  Finally, Coach Meyer returned to Seward for the last time in 1990 to become the head football coach at the school where he once played the game.  He remained in that position until 2008.

On June 23, 1983, Courtney married Connie Kirchner.  This couple had three children, two boys and a girl.

During the year that I played for Coach Meyer, there were at least three other players on the team from East Perry County.  They were Dean Detjen, Gerald Luehrs, and Gilbert “Bud” Theiss.  Gerry Luehrs was named to the all-conference team that year.  The Concordia Bulldogs had a record of 9-1 that season and were ranked #12 in the nation.

Before I move on, let me tell you that Courtney Meyer was not the first head coach at Concordia who could trace his roots back to Perry County.  In fact, the very first football coach at Seward was a professor by the name of Walter Hellwege.  Although Walter was not born in Perry County, his grandfather was born and lived his life in Frohna.  Walter Hellwege coached from 1925-1940, and it was during his tenure that the players wore leather helmets, and the athletic teams began to be called the Bulldogs.  I may have to devote a day to telling his story in the future ,on this blog.  Here is a photo of Coach Hellwege.

I found this short bio for Courtney’s latest football position on the Concordia University website.

Courtney Meyer is not just well known around Seward for his contributions to the athletic world.  He also should receive accolades for his service to his church and his community.  The list of his accomplishments would make this post too long.  I like to think that Courtney got many of his values from his Lutheran upbringing in Perry County.  I found this wonderful photograph that includes Courtney.  In this picture, his father and many other gentlemen are gathered after spending a day helping to develop what would become the Saxon Lutheran Memorial located in Frohna.  Courtney is the one in the front row who is not holding a beer bottle.  He is standing in front of his father, Alvin Meyer.

I consider myself to be very blessed to have had Courtney Meyer as a coach.  I do think that in my one year of football, both Courtney and I did some teaching of each other.  I was the first soccer-style kicker he had ever coached, so I guess you could say that I had some things to teach him, but for the most part, Coach Meyer had plenty to teach me.  Much of what he taught me had nothing to do with football.  I have been blessed with so many people in my life who have had a tremendous influence on my career as a teacher, and Courtney is definitely on that list.  Sorry, but I cannot resist posting here the only photo that I have that shows me playing football.  It is found in one of my college yearbooks. 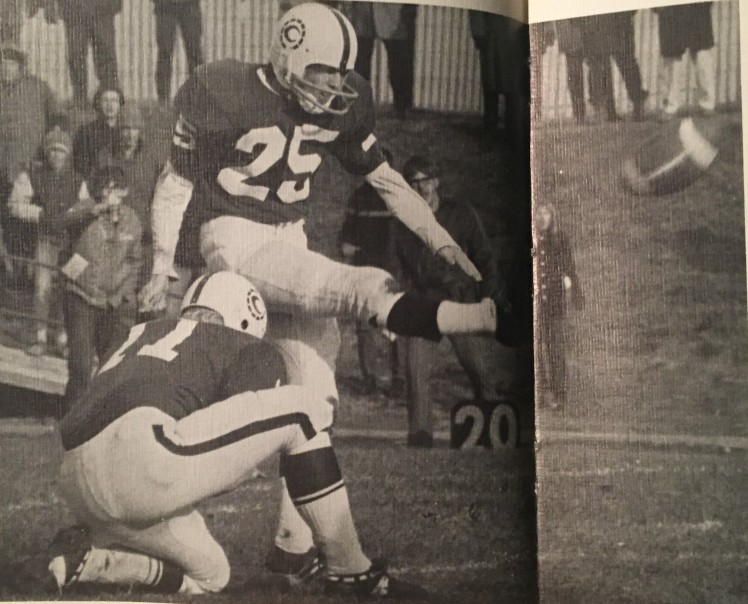 I know there are many people all over the country whose lives have been impacted by Coach Meyer, and especially those in the Seward, Nebraska area who have enjoyed his presence in their community for a long time.  They are proud to see Courtney receiving the Lifetime Service Award.  Courtney should be told that there are plenty of folks around here that agree with them.  I wish I could be there this weekend to join in the standing ovation Courtney is likely to receive.  Perry County is proud!  Congratulations, Coach!