The story I tell today brings together three surnames that have shown up in this blog on many occasions….Engert, Gerler, and Palisch.  And the Palisch surname actually shows up twice in this story.  It all starts with the birthday of Gotthilf Engert, who was born on September 30, 1845.  He was the son of Friedrich and Christiane (Matthes) Engert.  A story about Gotthilf’s father was written several years ago titled, Another Fertile Father, in which it was stated that between his two wives, Friedrich fathered 23 children.  According to our German Family Tree, Gotthilf was child #9, and he was the son of Friedrich’s first wife.  Gotthilf was baptized at Concordia Lutheran Church in Frohna, Missouri.  His baptism record is shown below.

We first find Gotthilf in the 1850 census.  He is called Emanuel G. on this document.  This census was taken between the death of his father’s first wife and his marriage to his second wife because no wife is shown here.

By the time of the 1860 census, Gotthilf’s father had remarried and had several more children.  Gotthilf was 15 years old.

Gotthilf shows up in the 1870 census as still living in the same household, and I will not show it.  That will lead us up to his marriage which took place in 1872.

Gotthilf’s wife will be Anna Maria Gerler.  Anna’s family came to America in 1854.  On the voyage here, her mother and two siblings died aboard ship.  Soon after their arrival, her father married again, but then her father died right away.  The story about how the Gerler children were “farmed out” to other families was told in the post, The Genesis of the Gerler Genealogy.  It is an amazing story.  Anna Gerler was born on September 17, 1850 in Germany.  After all the tragedy in her family, Anna shows up in the 1860 census living with the Ernst Palisch family.  Her older brother, Ferdinand, was also living in this household, and the census taker wrote their surname as Ehler.  This young Palisch couple apparently also took in Caroline Hoffstaedter, the younger sister of Juliana (Hoffstaedter) Palisch, who had recently become an orphan.

Anna is also found in that same household in the 1870 census.  She is called a domestic servant, although I am sure the Palisch’s considered her as a daughter.

On June 16, 1872, Gotthilf Engert married Anna Gerler at Immanuel Lutheran Church in Altenburg.  Here is the church record for that wedding.  For some reason, there are several “edits” on this record.

Our German Family Tree shows 11 children being born to this couple, all of whom were baptized at Immanuel, Altenburg.  Here is this family as it shows up in the 1880 census.

If we could see the 1890 census, we would find a houseful of children, but we don’t see the next census until 1900 in which we see just 4 children.

On May 9, 1912, Anna married again.  Her second husband was Bernhardt Palisch who also had previously been married.  Bernhardt was the younger brother of Ernst Palisch who had helped raise Anna.  Anna was 61 years old, and Bernhardt was 71 years old when they remarried.  Here is the marriage license for this wedding.

Bernhardt died in 1927 at the age of 86, once again leaving Anna as a widow.  We see her in the 1930 census where she is 79 years old and living in the Herman Kuntze household.   I’m a little puzzled who the Ida A. Kuntze is in this census.  There was an Ida Engert in Anna’s family, and there was an Ida Palisch in Bernhardt’s family, but neither one of them married a Kuntze.

Anna died in 1936 at the age of 85.  She and both of her husbands are buried in the Immanuel Lutheran Cemetery in Altenburg. 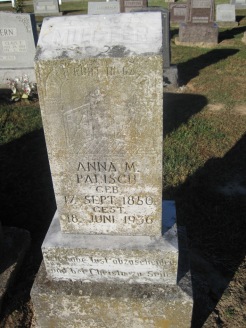 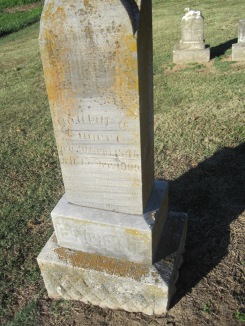 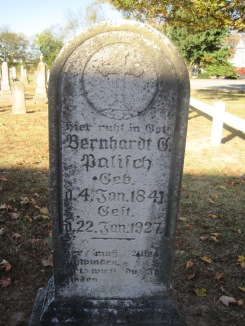 The three major surnames we find in this story are all included in what I would call “Immanuel Names”.  The only church record for anyone in this story that is not from Immanuel is one that was written down before Immanuel Lutheran Church was formed in 1857.  I am going to bring this post to a close by showing you the obituary for Anna (Mary) Palisch.  In addition to the many children who show up in the Enger, Gerler, and Palisch families of the previous generation, we can see that Anna had many children, grandchildren, and great-grandchildren traced back to her.