Today will be a story that illustrates the old saying, “What goes around, comes around.”  Quite a while back, I wrote a post about Johann Gruenhagen, one of the few persons that was part of what we call the “St. Louis Additions”.  It was a group of Lutherans already living in St. Louis when the Gesellschaft arrived in 1839 and wanted to join them.  The previous post was titled, An Old Lutheran’s Odyssey.  I encourage you to read it because it is a good starting point for today’s story, and I will have plenty to write without having to repeat details that were in that post.  Let me say that Johann Gruenhagen was very instrumental in the history of Oshkosh, Wisconsin.

Let me also state that during the short time that Johann Gruenhagen was in this area, he was part of the Johannisberg settlement just across the Apple Creek in north Cape Girardeau County.  Today, I am going to call that the original “Johnny’s Place”.  In fact, I have a new theory trickling through my brain that maybe Johannisberg was named after Johann Gruenhagen back in the early days of settlement.  The other settlements were named after places in Germany, but when I looked for Johannisberg in Germany today, it is not near the Saxon area where most of the immigrants originated.

I am going to move directly to the city of Oshkosh, Wisconsin to discuss a son of Johann.  His name was Henry Ferdinand Gruenhagen who was born on June 14, 1829.  We find him called Ferdinand in the 1860 census for Oshkosh.

Next we find him called Henry in the 1870 census for Nekimi, Wisconsin, which is not far from Oshkosh.

It is hard to read, but in that census we find Matilda Gruenhagen, who was born on December 12, 1867.  The Gruenhagen’s moved again before the 1880 census where we find them living in Marion County, Missouri near the city of Palmyra.  The census record is shown in two images.

Later in his life, Henry would be living in Wentworth, South Dakota with one of his sons.  It would be in Wentworth that Matilda would marry a man by the name of Karl George Frankenbach.  Her husband traveled to Wentworth to get married because he was from back in Marion County, Missouri where he must have met Matilda.  They were married in 1893, and they moved back to South River, Missouri.  We have this photo of Matilda and Karl George Frankenbach.

We find them in the 1900 census for that location.

This Frankenbach household had two children along with Matilda’s in-laws and one her husband’s brothers.  One of those children was a girl named Minnie in this census.  Elizabeth Wilhelmina Frankenbach was born on October 29, 1894, so we finally have gotten to today’s birthday girl.  It is thanks to Kathy Birkbigler’s ZionRootsGenealogy.org website that I found this name.  Without that, I would have never found this story and its connection to Perry County.  We do not find any Frankenbach’s in our German Family Tree.

On April 12, 1917, Minnie Frankenbach and her sister, Anna, had a double wedding.  Minnie married Jacob Daniel Voepel and Anna married Fredrick Herman Schluckebier.  We have a wedding photograph showing all four of these folks.  The Voepel’s are on the left and the Schluckebier’s are on the right.  By the way, around these parts, the surname Voepel is pronounced “Fable”. 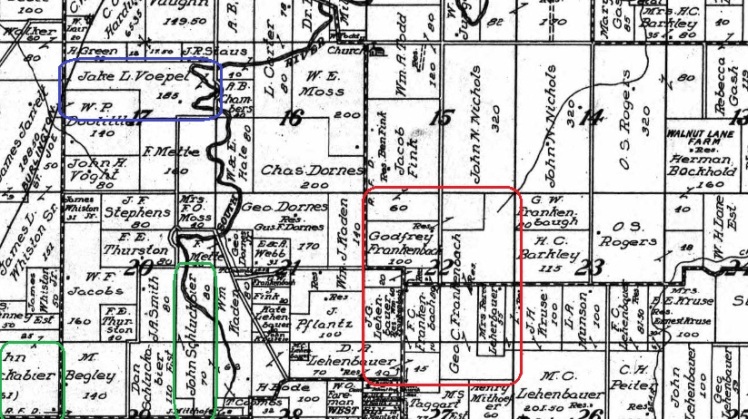 We have some other photographs from this Frankenbach family that I am going to put in a clickable gallery.

Now, we need to connect the dots in order to get us back to Perry County.  Dan Voepel had an Uncle John Voepel who married Emilie Schilling.  John and Emilie Voepel moved to Perry County and had a son who became known as Johnny.  There was a brief mention of this Voepel marrying a Schilling in the story titled, Florida – Born Beautiful.  The bottom line is that Dan Voepel and Johnny Voepel were cousins, which also means that today’s birthday girl was married to Johnny’s cousin.

Many of the old-timer’s from around here probably already know where this story is going to end….at Johnny’s Place.  Johnny Voepel ran a tavern in Altenburg for many years.  Even though it was located in a few different locations, it was always called Johnny’s Place.  Below is a photo of Johnny and his father, John, in that place of business. 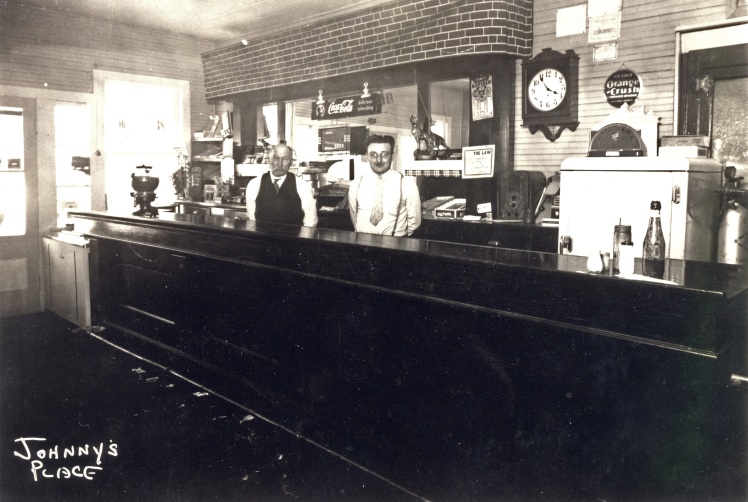 Later, we see Johnny standing outside Johnny’s Place with another gentleman.

Many of you will recognize that this building is the one now called Grayson’s Bar & Grill.

So now we have come full circle.  We started at Johnny’s Place (Johannisberg) and ended up at Johnny’s Place.  I would like to go back in time to patronize the original Johnny’s Place in Altenburg.  I have heard so many stories that center around that watering hole.  I guess I’ll just have to settle for finding my way into Grayson’s for a Lutheran adult beverage.

I have to tell one more quick story.  When I was researching this story last night and I ran across the Schluckebier surname, I had to wonder if the Schluckebier’s from Marion County were connected to Dr. Lee Schluckebier, who at one time was my principal when I taught in Memphis.  I sent him a Facebook message and asked him if had any kin in Marion County.  He later responded by saying that was where he was born and raised.  It’s a small Lutheran world.  I have learned that I never know where a story is going to lead me.