You might call today’s post a continuation of yesterday’s.  I will tell you the tale of Arthur Estel’s younger brother, Walter.  I found this story quite easily.  I started my search in the German Family Tree where I left off yesterday, looking for a life event that took place on April 12th.  The search took me to a spot right under the entry for Arthur Estel.  I need not look farther.

The life event I found was not one for Walter Estel.  Instead, it was a birthday for his wife, Margaret Schlimpert.  She was born Margaretha Emilie Louisa Schlimpert on April 12, 1895, so today would have been her 125th birthday.  Margaret was the daughter of Joseph and Carolina (Schuerenberg) Schlimpert and baptized at Christ Lutheran Church in Jacob, Illinois.  The Schlimpert surname entered the Jacob, Illinois community after its beginnings in Perry County, Missouri, just like the Estel family had done.  The Schlimpert story about how and why this Schlimpert family made the move across the river was told in the post, Seelitz to Jacob.  You can see where the Schlimpert land was located on this map.  It was very close to Christ Lutheran Church.

Below is the baptism record for Margaret.

Margaret can be found at the age of 5 in the 1900 census for Fountain Bluff Township.

Margaret can once again be found in this household in the 1910 census.

Now, let’s turn our attention to Walter Estel.  In yesterday’s post, it was mentioned that the second child in the Paul and Mathilda Estel family was born in Marshall, Missouri.  Therefore, I do not have a baptism record for Walter.  The first record for Walter in the Christ Lutheran church books is his confirmation record in 1902.  This record documents Walter’s birth in Marshall.

I displayed Walter in the 1900 census yesterday when I wrote about his brother, Arthur.  The last census in which we find him as a single man was the one taken in 1910, and that census entry was also displayed yesterday.  In that year’s census, Arthur is shown as being newly married with Walter still living with his parents.  Walter was described as being a house carpenter.  If you want to take a look at those census records again, look back to yesterday’s post.

That leads us up to the marriage of Walter Estel and Margaret Schlimpert.  These two were married on October 4, 1914.  We have the church record from Christ Lutheran Church in Jacob.

We also have a transcription of an Illinois marriage record for this couple. 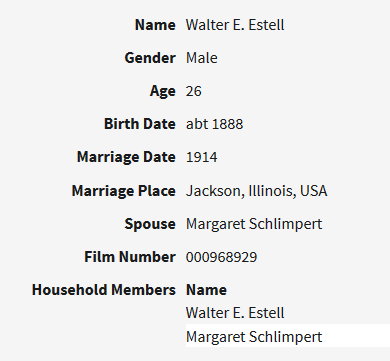 In 1917, Walter had his World War I draft registration completed.  This is yet another document that validates Walter’s birthplace as Marshall, Missouri.

The 1920 census shows 3 of this couple’s children.  All of them were girls.

The 1940 census shows the Estel couple with one single daughter, along with another daughter and son-in-law.

In 1942, Walter had his World War II draft card completed.  His older brother, Arthur, is shown on this form as the person who would always know Walter’s address.

I have these two photos of Walter and Margaret. 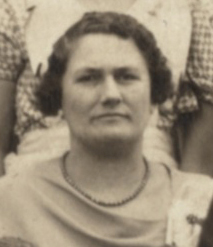 I also managed to find photos of all 4 of Walter and Margaret’s girls.  (Click to enlarge)

Walter and Margaret are buried together in the Christ Lutheran Cemetery in Jacob, Illinois.  They have the same design for their gravestone as Walter’s brother, Arthur.

I will end this post by once again showing a photo that was part of yesterday’s story.  The building in the foreground with the name of the city, Jacob, emblazoned on the side, must have been the train station in which Walter worked for so many years.