Anna Grother arrived in America in 1838, a year before the Gesellschaft landed.  She and her family made the journey aboard the Sophie.  The Grother’s then became part of what we call the St. Louis Group, made up of a few families that joined the Gesellschaft after that group arrived.

Martin, Jr. was baptized at Concordia Lutheran Church in Frohna, Missouri.  Below is his baptism record.

In Martin’s first census, the one taken in 1850, his family surname is shown as Robb.  Martin was 4 years old.

One more census shows Martin as a single man.  The 1860 census shows one more child in the Popp family than before.  This was the year that Martin was confirmed.  Surprisingly, he was confirmed at Immanuel Lutheran Church in Altenburg.  There must be a story there, but I do not know it.

Now, let’s discuss Martin’s future wife.  Margaretha Hacker was born on July 14, 1851, the daughter of Andreas and Anna Barbara (Knob) Hacker.  Her family probably immigrated in 1850, a year before Margaretha’s birth.  I have this photo of Margaretha’s father, but not one of her mother.

We do not have a baptism record for Margaretha, but the Hacker family has plenty of records in the Peace Lutheran Church, Friedenberg book.  There is only one census in which we find Margaretha as a single woman.  Here is that 1860 census for Cinque Hommes Township.  Margaretha’s mother had died in 1856, so the Bridget shown here is her stepmother because Andreas had married Bridget Friedmann in 1857.

The marriage date for Martin Popp and Margaretha Hacker is up for some debate.  The civil marriage record for Perry County is shown below.  It indicates a wedding date of April 19th.

However, the Immanuel Lutheran Church records say that this couple was married on Easter Sunday, with no date given.  Easter Sunday in 1870 occurred on April 17th.  Here is the image of that record.

Below is a translation of some of the pertinent facts in this record.

At this point, let me take a moment to discuss the fact that in those days, and to a certain extent still today, couples would not marry during the Lenten season.  In some cases, pastors would refuse to perform such marriages.  So, you often find marriages occurring right after Easter.

We already find this couple in the 1870 census.  They were living in the household of Martin’s parents.  If you didn’t know better, you might think that Margaretha was a daughter in the Popp family.

According to our German Family Tree, Martin and Margaretha had 7 children, two of which died as youngsters.  One of the boys was named Andreas Martin Popp, so he was named after his pop and his maternal grand-pop.

We find the Popp family with 3 children in the 1880 census.  Martin’s mother and sister were also in the household.

The 1900 census was the last one which included Margaretha.

Margaretha is not found in the 1910 census because she died in 1904 at the age of 52.  Martin was living in the household of his son, Andrew.

Martin Popp died in 1917 at the age of 70.  He and his wife are buried in the Concordia Lutheran Cemetery in Frohna. 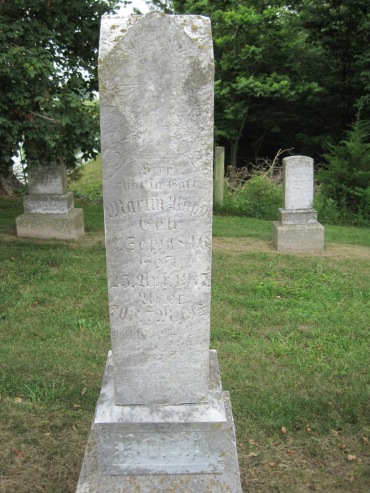 Martin Popp was a farmer near Frohna all his life.  Sorry, but I cannot resist.  I have to ask the question.  Did Martin grow Popp corn?

If I was still a middle school teacher, that little joke would have elicited a giant groan from all my students.

I will close by saying that around here the name Popp is pronounced as “pup”, not pop.  I waited till the end to mention this because it has a tendency to ruin all my jokes.