Henry and Wilhelmine (Naeser) Schmidt (no relation to me) had a dozen children according to our German Family Tree, and two of them became Lutheran ministers.  The two pastors spent most of their careers in the state of Missouri.  Those two preachers will be the subjects of today’s saga.  This may take a while.  I’m not only writing about two characters, but there are a few side stories that I find interesting.

I will start with the older Schmidt.  Johannes Franz Schmidt was born on June 20, 1865, making today his 155th birthday.  John’s parents were members of Concordia Lutheran Church in Frohna, so that is where their children were baptized.  Here is John’s baptism record.

John is found in only one census in which he was living in Perry County.  That was the one taken in 1870.  I have to display two images in order to show the entire family.

The other Schmidt to become a pastor was Paul Theodore Schmidt who was born on June 14, 1875, almost exactly 10 years after his brother, John.  Below is his baptism record.

The first census in which we see Paul was the one taken in 1880 when he was 5 years old.

There are a few interesting things in this image.  First of all, you do not find John Schmidt.  Yet, John Schmidt’s future wife, Anna Lueders, is shown a few households below the Schmidt’s in this entry.

In 1880, John Schmidt had already moved away to study for the ministry.  We find him in that year’s census in Ft. Wayne, Indiana.

Anna Lueders was born on the Fourth of July in 1867, the daughter of August and Mary (Roth) Lueders.  Her father was the man who was the proprietor of the Lueders Store in Frohna.  Probably because Rev. J.F. Koestering was serving both the Altenburg and Frohna churches at the time, Anna’s baptism record is missing from the church records.  Undoubtedly, she was baptized at Concordia, Frohna.  Anna is shown in this Lueders family photo taken on the occasion of her parents’ 50th anniversary.  She is the woman standing to the right of her father in the white blouse.

On July 14, 1889, Rev. John Schmidt married Anna Lueders at Concordia, Frohna.  Here is the church record for that wedding.  This document states that John was the pastor in Carrollton, Missouri.

Rev. John Schmidt would serve Immanuel Lutheran Church in Carrollton, Missouri his entire career.  This is what that church looks like today.

Next, we see this household in the 1910 census.  The Schmidt household had gotten quite large.

The last census in which we find Pastor Schmidt was the one taken in 1920.

Anna Schmidt can still be found in a few more census records.  First, here is the one from 1930.

Anna died in 1952 at the age of 85.  Her death certificate indicates she died in Kansas City where she was living with her daughter, Edna.

Rev. John and Anna Schmidt are both buried in the Oak Hill Cemetery in Carrollton, Missouri, but Findagrave has no gravestone photos for them.

Now, we will move on to the younger Schmidt.  He, too, went off to study to become a Lutheran pastor.  Because his brother went to Ft. Wayne, I think it is likely that Paul T. Schmidt went there also.

On April 18, 1900, Paul Schmidt married Wilhelmine (Minnie) Scharfenberg in McLean County, Illinois.  When we see Minnie’s death certificate later, it will say that she was born in Danvers, Illinois.  We have this marriage record for the Schmidt/Scharfenberg wedding. 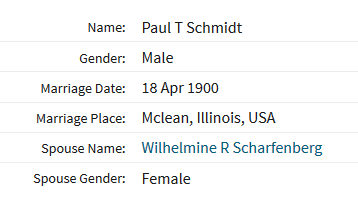 In the census for that year, we find Rev. Paul T. and Minnie living in Bollinger County, Missouri, not far from here.

Ten years later, we find this Schmidt household living in the Roc Roe Township in Arkansas.  It is the only time we have evidence of either of the Schmidt brothers not living in Missouri.  A few of their children were born in Arkansas.  There is also a son that was born in Tennessee, but I cannot explain that.

Rev. Schmidt had his World War I draft registration completed in 1918.  At that time, he was living in Craig, Missouri which is located in the northwest corner of the state.

We find the Schmidt household in that location in the 1920 census also.

When the 1930 census rolls around, this family has once again relocated.  Now they were living in Franklin County, Missouri near a small town known as Lyon.

Rev. Paul T. Schmidt was the pastor at Ebenezer Lutheran Church which is said to be found in a place called Port Hudson.  Here is a photo of that church.

The last census we can view for the Schmidt’s is the one taken in 1940.  The Schmidt’s were still in Lyon, Missouri.

Minnie Schmidt died in 1958 at the age of 85.  We can also view her death certificate.

Rev. Paul T. and Minnie Schmidt are buried together in the Immanuel Lutheran Cemetery in Washington, Missouri.

Now, I need to get to the side stories for this post. First, in the course of doing research for this story, I took a look at some of the surnames in the Ebenezer Lutheran Cemetery in Port Hudson. I found 27 entries for the surname Hoemann. The present pastor here at Concordia Lutheran Church in Frohna, where the two Schmidt pastors were baptized and raised, is Rev. Paul Hoemann. I contacted him and asked if he had any roots at Ebenezer Lutheran Church. He was not sure, but he does have kin from Washington, Missouri and is going to check with others in his family if he has any relatives from that location. How appropriate would it be if Concordia, Frohna would provide a pastor for this congregation only to have one of their families later provide a pastor for Concordia, Frohna?

I also found a connection in this post to my life story. When I saw the 1940 census entry for Rev. Paul T. Schmidt in Lyon, my eyes about popped out. I noticed the name of the young teacher that was living with them at the time. His name was August Schwark. That sent me down another rabbit hole. You see, the man who was the principal of the school at which I did my student teaching back in 1971 in Indianapolis, Indiana was August Schwark. I located his obituary, and it said that he was indeed a teacher in a one-room school in Port Hudson shortly after graduating from Concordia Teachers College in River Forest. I found out he also spent some time as a teacher in Jackson, Missouri.  He was a young pup back in 1940 and probably received some mentoring from a Schmidt. A little over 30 years later, another young pup by the name of Schmidt got a little mentoring from him. Here is a photo of August Schwark.

Finding Mr. Schwark’s name brought back some memories that put a smile on my face today.

3 thoughts on “A Pair of Preacher Schmidts”