Pauline Clara Pfau is today’s birthday girl.  She was born on June 23, 1864, the daughter of Gottfried and Amalie (Draman or Trummann) Pfau.  There is a little bit of a puzzle having to do with this Pfau family.  Clara’s parents arrived in America aboard the Magdalene in 1859.  Take a look at the passenger list for this group.

In among all the Pfau’s is Amalie Trummann, who is about the age of Gottfried, and 3 Pfau children.  Was she the mother of these children, or were they children of a previous mother?  Did Gottfried and Amalie get married after arrival in this country?  I was unable to find a marriage record for them.  Here’s another puzzle.  The above ship arrived in New Orleans on November 5, 1859.  On December 6, 1859, a child of these parents was baptized at Trinity Lutheran Church in Altenburg that was said to be born on November 6th, one day after they arrived in New Orleans.  If this is the case, Amalie must have been quite pregnant on that ocean voyage.

The Pfau family was found in the Union Township in the 1880 census.  They can be found in the records that were lost for many years but recently located.

Now, we turn our attention to Clara’s future husband.  His name was Heinrich Popp, the son of Johann and Margaretha (Ross) Popp.  Henry was born on August 18, 1855 and baptized at Concordia, Frohna.  Here is his baptism record.

Henry can be found in the 1860 census at the age of 5.  The Popp family must have lived close to the Frohna church because Rev. Heinrich Christoph Loeber’s household is listed right next to the Popp household in this census.

The last census in which we find Henry as a single person was the one taken in 1880.  His mother died sometime before this census was taken, but she died during the Koestering Hole in the church records.

On October 4, 1883, Henry Popp married Clara Pfau at Concordia, Frohna.  Below is the church record for that wedding.

According to our German Family Tree, Henry and Clara had 9 children.  When the 1900 census was taken we find this household with 6 children.  Henry was an engineer.  I am thinking he may have been helping run the machinery at the Frohna Flour Mill in Frohna.

When the 1910 census was taken, we find the Popp family living in the Union Township of Perry County.  Henry was doing odd jobs.

In the 1920 census, we find Henry living in St. Louis and working as a porter in what is called an automobile house.

We find Henry again in the 1930 census.  He was living in the household of his daughter, Emma, who had married a Hoehne.

In the last census in which we find Henry, he was living in a section of St. Louis called Normandy.  This time, he was living with another daughter named Flora, who had married a Farmer.

Henry died in 1942 at the age of 86.  His death certificate says he was a retired butcher, but I never found any evidence of him working at that job.

Henry and Clara Popp are buried in the Concordia Lutheran Cemetery in St. Louis.  Clara has a gravestone of her own, but Henry is buried with two of his sons, Richard and Erwin Popp.  Richard had died 20 years before his father when he was just in his 20’s. 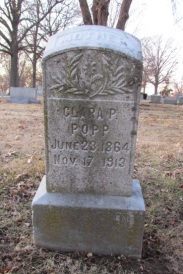 When you are researching either of the surnames from this story, Popp and Pfau, you must be careful.  In both cases, there are different clans with those surnames that do not seem to be tied to one another.  In the case of this Popp family, we run across the names of a John Popp and a Richard Popp.  They are not the John Popp who has been a guest blogger for us or the Richard Popp that was a teacher at Trinity, Altenburg for many years.  I also do not think you can connect the Pfau family from this story to the Gustav Pfau who was part of the Gesellschaft in 1839.

One thought on “Popp’s Pfau Frau”