Emma Concordia Estel was born on July 22, 1895, so today would have been her 125th birthday.  Emma was the daughter of Martin and Emilie (Weinhold) Estel and her baptism record can be found in the books of Trinity Lutheran Church in Altenburg.  However, she is yet another one of those children who likely would have been baptized in the church/school located in Wittenberg.  Below is her baptism record.

Emma is found in her first census in 1900 at the age of 4.  Her father was called a miller.  The Estel family was quite large.  I have to display their household in two images.

Emma’s father worked as a miller at the mill located in Wittenberg whose proprietor was Joseph Weinhold.  Joseph was not only Martin’s employer, he was his father-in-law.  Later, Martin Estel would become a partner with Joseph in operating this mill as can be seen in the photo below that was taken during a flood.  One the side of the building, you can see that it says Lone Star Roller Mills, Estel-Weinhold.

A later photo was taken of that mill which is shown below.  It was an impressive structure for such a small town.

Next, we find Emma in the 1910 census, once again living in Wittenberg.  She was 17 years old and the oldest child living with her parents.

Sometime after the above census was taken, it appears the Estel family moved to St. Louis.  When Martin Estel died in 1915, his death certificate says he lived in that city, and he was buried in the Concordia Cemetery.

I am figuring that it was about the time of her father’s death that Emma Estel got married.  I was unable to find a marriage record for her.  This German Lutheran girl from Perry County married an Irish Catholic boy from St. Louis.  His name was James J. McCloskey.  He was born on August 4, 1886.  Below is a St. Louis birth record for James.

James was the son of Patrick and Margaret (Stack) McCloskey.  The McCloskey family was another large one, but in 1900, the father of the family died.  We can find James in the 1900 census at the age of 13.

James McCloskey can be found next in the 1910 census at the age of 23.  He was working as a clerk for the railroad.  His mother was the proprietor of a market.

James and Emma McCloskey began having children in 1916.  According to several documents as well as some family histories on Ancestry.com, this couple had 3 children.  When James had his World War I draft registration completed in 1917, it stated that he had one child.

We find them in the 1920 census living in the household of Emma’s mother, Emilie Estel.  I squeezed two images together to make it more visible to see the occupations of the members of this household.  James was a florist. 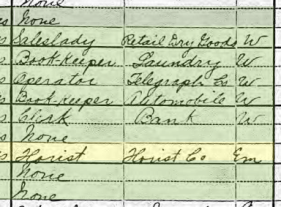 Later documents would indicate that James was part of a florist business that was called McCloskey Brothers Florists, so he must have been in business with at least one brother.  I know one of them was a brother named Joseph McCloskey.  Next, we find the McCloskey household in the 1930 census.

The last census that can be viewed for this family was taken in 1940.  James was still a florist.

James had his World War II draft card completed in 1942.  It indicates the florist business had the same address as their residence.

James McCloskey died in 1965 at the age of 79.  His death certificate says he was a retired insurance salesman.

James was buried in the Calvary Cemetery in St. Louis, but there is no gravestone photo on Findagrave.  There are 57 burial sites listed in that cemetery with the surname McCloskey.

Emma McCloskey died in  1985 at the age of 89.  She is buried with several other Estel family members, including her parents, in the Concordia Cemetery in St. Louis.

I am thinking that there may be some other stories for this blog shown on that gravestone.

The youngest boy in this McCloskey family was named Robert.  There is a rather famous children’s book author and illustrator by the name of Robert McCloskey.  You may have heard of his book, Make Way for Ducklings.  I know one of my favorite books as a child was another of his books.  It was titled, Homer Price.  Not long ago, my wife asked me to buy her the book, Blueberries for Sal, and give it to her as a present.  However, it did not take long to discover that the author was not the son of James and Emma.

For some reason, while I was researching this story, I had this nagging feeling that I had also heard this surname in another context.  Eventually, I realized that it was a McCloskey couple that has been in the national news lately.  A husband and wife got lots of attention for brandishing guns in front of protesters.  That incident took place in St. Louis, and their name was McCloskey.  Now, I’m wondering if that man might be related somehow to the James McCloskey in this story, but I doubt that I will ever know.