Emma Caroline Weber would be celebrating her 130th birthday today.  She was born on July 28, 1890, the daughter of Herman and Wilhelmine (Hoffmann) Weber.  That makes her one the members of the “Ridge Webers”.  Emma was baptized at Immanuel Lutheran Church in Altenburg.  Below is her baptism record in two images.

A civil birth record from Perry County is displayed here in two images.

Emma is found in the 1900 census at the age of 9.  She was the first child born into her family.

I found a few photos that show Emma as a child.  Remembering that she is the oldest child in the family makes it easier to pick Emma out of these family photos.

Next, we find one in which the children are a little older and one more child added.

William’s father died in 1891, leaving Mary Elizabeth as a widow.  We find William living in his brother, Edward’s, household, which included his mother in the 1900 census.

We find William and his mother in the 1910 census, the same year that William and Emma would be married.

On November 22, 1910, William Hutteger “crossed the creek” to marry Emma Weber at Immanuel Lutheran Church in Altenburg.  Here is the marriage license for this couple.

Their church marriage record is shown below in two images.  It says Emma was from Friedland, which is another name for The Ridge.

We have this photograph of the wedding party of William and Emma.

In 1917, William had his World War I draft registration completed.

This couple had five children, three boys and two girls.  When the 1920 census rolled around, we find this Hutteger household.  I also included the household of William’s older brother, John Hutteger.

Next, we find the Hutteger family in the 1930 census.

A plat map produced for Cape Girardeau County in 1930 shows a parcel of land owned by William Hutteger.

The last census that we can view is the one taken in 1940.

William had his World War II draft card completed in 1942.

At some point later in their lives, William and Emma must have moved to Jackson, Missouri.  The family gathered for the photograph shown below, probably sometime in the 50’s.

In 1960, William and Emma celebrated their 50th anniversary.  An invitation was sent out to announce this event.  The event was to take place at St. Paul’s Lutheran School in Jackson.

A local newspaper carried a story about this gathering.  In order to make it large enough to read, I am placing three images here.  You will have to read down the first column before going to the 1st image to begin reading the second column. 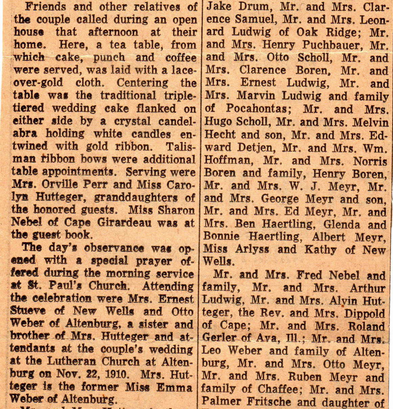 Another photograph was taken of this family at that occasion.  This one shows the five Hutteger children along with their spouses.

Emma Huttiger died in 1964 at the age of 73.  Her death certificate says she died of ovarian cancer at the Southeast Hospital in Cape Girardeau.

William Hutteger died 2 years later in 1966 at the age of 76.  His death certificate states that he also died at Southeast Hospital.  His mother’s maiden name is mistakenly given as Steinhoff instead of Steiner.

William and Emma are buried together in the Russell Heights Cemetery in Jackson, Missouri.

I feel the need to give some credit to our museum’s friend and supporter, Diane Anderson, for being the source of many of the photographs shown in this post.  She is a great source for information on several of the surnames that are subjects on this blog, including the Ridge Webers.

Half of the concrete floor for our museum addition was poured yesterday.  I promised a few videos from that pouring.   Enjoy.