Rev. William Zschoche became a pastor in 1866 after graduating from Concordia Seminary in St. Louis.  His first call was to a church in Paola, Kansas.  Not long after graduating, he married Emily Richter.  After serving there, he took his next call to Atchison, Kansas.  Finally, Rev. Zschoche’s last congregation was Concordia Lutheran Church in Frohna, Missouri.  He arrived in Perry County in 1883 and served this church until his death in 1909. 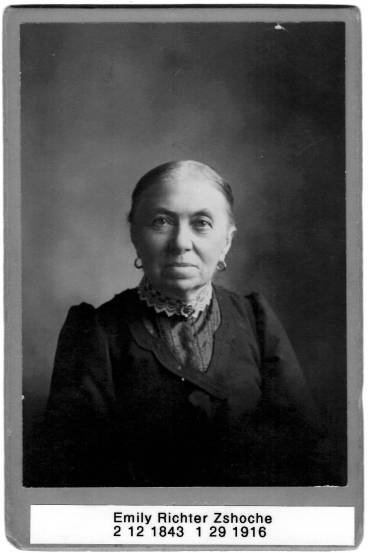 While in Atchison, Kansas, their second child was born on January 22, 1876.  Her name was Lydia Zschoche.

Meanwhile, in the city of Frohna, in 1873, Johann and Margaretha Hilpert were blessed with their second child, a son named George Dietrich Hilpert.  He must have been around ten years old when the new pastor moved to town with a family that included Lydia, who was around seven at the time.  The two no doubt went to the Lutheran school in Frohna where they both must have experienced learning at the feet of Mr. Wukasch and Mr. Welp.

George attended the Lutheran seminary in Springfield, Illinois, and when he graduated from that institution he was ordained and installed at St. Andrew Lutheran Church in Niagara, North Dakota on September 22, 1896.

It was not long after his arrival in North Dakota that George traveled back to his hometown of Frohna in 1897.  It was there that he married the pastor’s daughter, Lydia Zschoche, on July 8th.  The couple would then travel back to North Dakota and live in the parsonage which had been built next to the church in Niagara.

Partly because of his health, Rev. Hilpert accepted the call to Eisleben Lutheran Church in Illmo, Missouri.  Illmo is now a portion of the city of Scott City, Missouri, which is located just south of Cape Girardeau.  He started serving this congregation in the fall of 1908, and remained there until his death in 1940.

The Lutheran Heritage Center & Museum recently received many artifacts from John Hilpert, a descendent of this family.  This week, plans are in the works to place a new Zschoche/Hilpert exhibit to go on display.  We invite you to come and enjoy it.

4 thoughts on “A Zschoch-ing Wedding”