One of the great things about writing on this blog is the fact that I am learning new things on a daily basis.  For the most part, when I start looking into a story, I am working from square one.  I have no idea where the story will lead.  There are also those stories which lead me to learn about other places because the connections that start out in Perry County may end up somewhere else.  Today is one of those stories.  It leads me to lead.

Today’s story starts with the birth of Joseph Walter Hemmann and his baptism at Salem Lutheran Church in Farrar, Missouri.  He was the son of Julius and Gesche (Hesse) Hemmann.  It appears that this Hemmann family had moved from Grace Lutheran in Uniontown to Salem Lutheran in Farrar around 1890.

When the United States got involved in World War I, Joseph registered for the draft.  Here is that form.

You can see that by this time, Joseph was living in Mine La Motte, Missouri and he was working as a mining machinist.  Mine La Motte is located near Fredericktown, Missouri, and it is was the location of one of the earliest lead mines to be found west of the Mississippi River.  This area in Missouri is also called the Lead Belt.

Joseph did go off to fight in World War I.  When he returned, we find him in the 1920 census living in Jefferson County, Missouri and listed as a machinist for the St. Joe Lead Company.  The indications are that Joseph served in this capacity at that company for the rest of his career, although it is likely that he worked at a variety of the mines operated by the St. Joe Lead Company.

It was also during 1920 that Joseph married Mamie Banes in Madison County, Missouri.  Here is his application for a marriage license.

This is the first indication that I have found that Joseph used a spelling for his last name which contained only one “n”.  There are several Hemmans around here who have just one “n” in their name.  I have heard the story that Joseph’s father, who was a Civil War veteran, had his pension checks come to him made out to Julius Hemman,and it was just simpler to change his signature to Hemman in order to cash those checks.  However, his tombstone still has Hemmann on it.  Other siblings of Joseph did not make the change.

The story of lead production in the Lead Belt of Missouri is a fascinating one.  Mines like the one in Mine La Motte became important during the Civil War because the lead was used for making ammunition.  Several skirmishes occurred at these mines during that war.  Lead mines popped up all over this area of Missouri over the years. 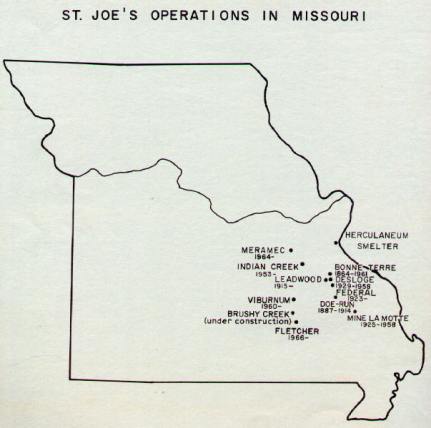 Lead mining requires miners going underground to bring out the ore.  However, it does not look like Joseph worked underground.  His job is described as a machinist.  I picture him working in a factory such as this one in Bonne Terre, Missouri.

If you are interested in finding out about the lead mining industry in Missouri, I would suggest you visit this website:

Some amazing photos can be found there, as well as several articles which describe the history of the lead mining industry.  Here is a photo of what are referred to as trapeze miners that just left me in awe: 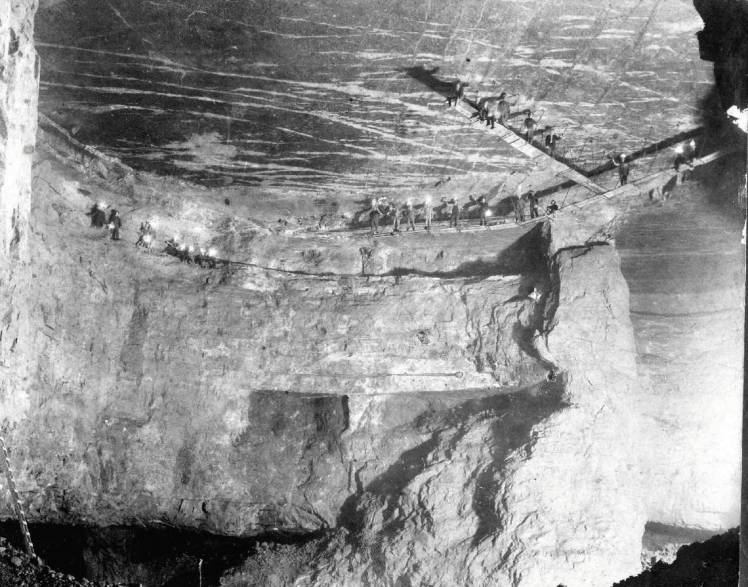 Joseph died in 1976 and is buried in the St. Francois Memorial Park in Bonne Terre, as is Mamie Hemman, who died in 1988. 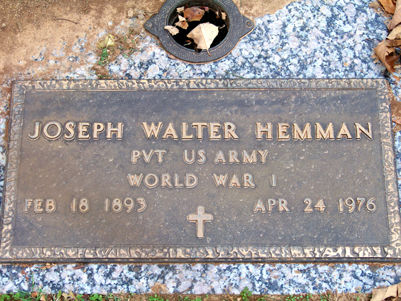 I can just imagine Mamie telling Joseph on weekday mornings, “Go to work, Joe.  Get the lead out.”