Otto Oswald was born on June 26, 1865 in Chester, Illinois.  Anna Kaempfe was also born in Illinois.  When she was born in 1875, her family was living in Millstadt, Illinois.  However, when these two were married in 1893, their marriage took place in Frohna, Missouri because both of these families had moved to Perry County.

Anna was the daughter of Traugott and Justine (Hennecke) Kaempfe.  Here is a family photo of the Kaempfe family taken sometime around 1899.

Anna is the second person from the left in the back row.  I think this is a classic photograph when you talk about how people did not smile when they were having their picture taken back in those days.  There are a couple of faces in this photo that could easily be mugshots taken by the police after someone is arrested.

Otto was the son of Christian and Margaretha (Droege) Oswald.  Here is a photo of the Oswald family taken sometime around 1903.  It contains both Otto and Anna.

Anna and Otto are in the back row on the right.  Otto is holding their son, Alfred.  Another son, Alwin, is seated on the ground in front of his grandpa.

Otto and Anna were married on May 7, 1893 at Concordia Lutheran Church in Frohna.  I figure an Oswald marrying a Kaempfe makes them an O-K couple.  Here is their wedding photo.

Already in his wedding photo, we see Otto sporting a mustache.  In all the photos I have seen of Otto, he has that mustache.  We also have a photo of the wedding party.

All of the men in this photo have just the top button buttoned on their suit coats.  I don’t think that has ever been the style during my lifetime, but it must have been in 1893.  I wonder if I find any other wedding photos from 1893, they would show the same thing.

The Oswalds would have a family of four boys.  A girl was born also, but she died the same day she was born.  Here is a photo of the Otto Oswald family.

Alwin is standing on the left with his wife, Meta (Stroemer).  Alfred is in the back on the right.  Paul, the youngest, and Erwin are in between their parents.  I have seen a few other family photos like this where everyone in the picture is wearing some sort of corsage, but the matriarch of the family is wearing a headdress of some sort.  I am also just guessing on this, but I think this photo was probably taken in the Lueders Studio in Frohna.

Over the years, I have seen that Otto was described as a carpenter, a furniture maker, and a furniture dealer.  Their home was located in Frohna.  We can see their property on this 1915 atlas map of Frohna. 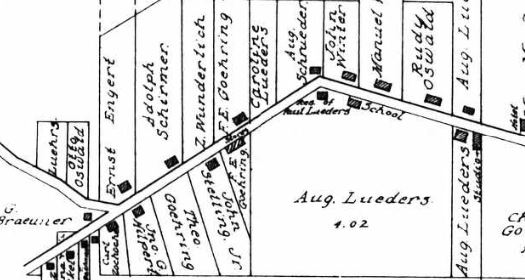 This is a satellite view of that area today.

The Oswald house was located on West St. just off Main St.  The West End Tavern is the building on the right near where the “A” is shown on Main St.

Otto is buried in the Concordia Lutheran Cemetery in Frohna.

None of the Oswald boys lived out their lives in Perry County.  Alwin moved to Sylvan Grove, Kansas where many other folks from Perry County ended up.  The other three boys ended up living in Madison, Nebraska, which is not all that far from the West Point, Nebraska area where a number of Perry Countians moved also.  After Otto’s death, Anna must have moved to Madison to live with one of her sons because that is where she is buried.  Here is her obituary. 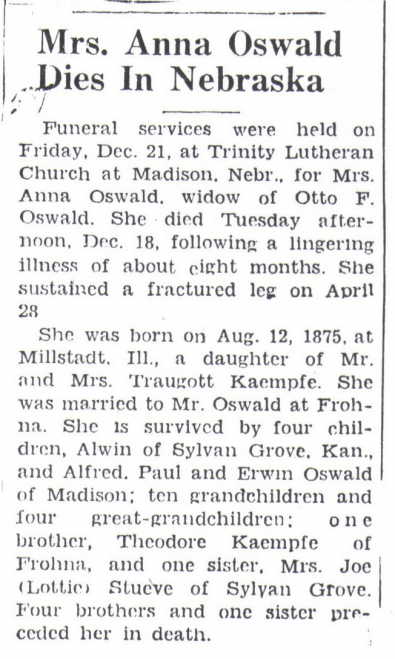 The Oswald name is no longer a common one around here.  At least I don’t know anyone by that name, but I am still learning the people here.  As I have often told people, because of the research I do for these blog posts, I think I know more dead people from Perry County than I do the living ones.