I usually find a topic for this blog which is associated with the date.  That is once again the case today.  June 28th was the birthday of a man in 1869 who happened to end up doing the same thing I did during my career.  He became a Lutheran school teacher.  However, this man, contrary to me, served in one city for most, if not all, of his career.  That city was Detroit, Michigan.

The man’s name was Johannes Gustav Estel.  Gustav was the seventh child born to Emanuel and Wilhelmine (Kramer) Estel of Wittenberg, Missouri.  He was baptized at Trinity Lutheran Church in Altenburg.  Gustav’s father, Emanuel was one of the original immigrants who was part of the Gesellschaft.  He was just six years old when he arrived in New Orleans aboard the Olbers.  Although his mother was a Kramer, she was the step-daughter of Julius Otto Nitzschke, who was the first teacher at Immanuel Lutheran Church in Altenburg when they started a school after splitting away from Trinity.  Maybe Teacher Nitzschke had an influence on young Gustav becoming a teacher.

The 1870 census shows Emanuel Estel as a dry goods merchant in Wittenberg and Gustav as a one year old.

The last of the children in the Emanuel Estel family was born in 1876, but according to the Trinity, Altenburg church books, she was born in St. Louis.  The 1880 census shows this family in St. Louis where Immanuel is listed as a commercial merchant.

While in St. Louis, the Estels were members of Holy Cross Lutheran Church.  By 1890, the family was back in Perry County.  Their youngest daughter, Nathalie, was confirmed at Trinity, Altenburg.  Emanuel would later move to Perryville and be the proprieter of a farm implement business.  This business was mentioned in a post about another of Emanuel’s sons, Rudi, that was titled, Perry County Politics.

Anna was living in Detroit, but hailed from Canada.  She was the daughter of William and Augusta Baumbach.  In this 1899 city directory, we see Gustav and Anna living at 124 Christiancy in Detroit.

On this map, you can see that this address is very close to the Detroit River.  Across that river is Windsor, Canada.  Anna may have grown up just across the river in Canada.

In the 1920’s, Bethlehem Lutheran Church had 2000 members, but in 2007, it was down to eleven members, and they decided to close.  One year later in 2008, this church became the home of a Hispanic LCMS church named Iglesia Luterana Pan de Vida (Bread of Life Lutheran Church).  I found this photograph of that church building. 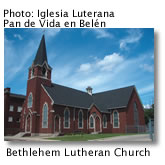 Gustav and Anna had two girls, Thelma and Vera.  A photo of the Emanuel Estel family was taken in Perryville which includes the Gustav Estel family.

Gustav is standing on the right in front.  Anna is seated to his right.  Their daughters, Thelma and Vera, are seated on the ground with very big bows in their hair.

Anna died in 1928; Gustav died in 1934.  They are buried together in the Woodmere Cemetery in Detroit.  Here is their gravestone.

It appears that Teacher Estel may have served his entire career as a teacher at Bethlehem.  He must have impacted the lives of so many children who attended that school.  For him to remain at the same school for so long indicates that he must have enjoyed serving there, and the congregation must have enjoyed having him there.  I end with showing you this photo of Teacher Estel taken at a time later in his life.