As I looked at the name of today’s main character, I realized that one of his names is one that was not commonly given to baby boys in this area.  That name is David.  This name is certainly one which has been given to many American children over the years.  It is also a Bible name.  It makes me wonder why the rarity of this name around here is the case.  I found a place online that listed the top ten names given to German baby boys during past decades, and in none of those decades did the name David show up, even though it is said that David is the second most common masculine name in the United States.  I do not have an answer to this question.  Maybe you do.

When Christian David Harnagel was born on August 23, 1883, he was probably named after another previous Harnagel…..his grandfather, Johann Heinrich David Harnagel.  His grandfather must have come to Perry County sometime before 1854, the year he was married in Altenburg.  Christian David was baptized at Immanuel Lutheran Church in Altenburg.  Almost all the Harnagels that are found in our German Family Tree are found in the Immanuel records.  David’s parents were Christian Gotthold and Rosalie (Palisch) Harnagel.  We have this photo of Rosalie.

Birth records other than in the church records are rather spotty back in those days, but we do find one for David.  Here are two images of that record.

The “Carl” in David’s name does not match with the church record at Immanuel Lutheran for some reason.  Also, we find the additional fact that Gotthold is listed as a saloon keeper.  The name E.E. Buenger also appears as the doctor who attended the delivery of the child.  Dr. Buenger has appeared in several blog posts before.  David was the oldest of 8 children in this Harnagel family.

The Harnagel family had a farm which was located on the bank of the Mississippi River about 2 miles south of Wittenberg.  Here is an image of a map showing his property in 1915.  His land is shown in the cock-eyed box labeled No. 2175.

Ted Harnagel, a great friend of our museum who also happens to be a grandson of Gotthold, has a collection of photographs from the old Harnagel farmstead.  Here are a few of them.  First, an overhead view of the buildings on the property.

Here we have a wonderful photo of Rosalie milking a cow.

Here is a winter photograph of the Harnagel place taken in 1922.

This is a more recent photo of the Harnagel home.

We also have a family photograph of the Gotthold Harnagel family that was reportedly taken in 1894.  David is on the far right.

We also have this photo of five Harnagel brothers with David in the middle of the bottom row.

When David was 16 years old, David was in Waverly, Iowa attending Wartburg Teachers Seminary.  We find him in the 1900 census.

David became a teacher and was teaching in Winnipeg, Manitoba, Canada in 1911.  Here is an immigration form showing him located there.

By this time, he was married to Christina Gaebler, who was from Pocahontas, Missouri.  A 1930 census shows the Harnagels living in Jacob, Illinois where David was a teacher.

From this census, we can surmise that David was a teacher in Canada, Ohio, and New York before ending up in Jacob because those states are listed as those in which the children were born.  We also have this description of the career of Herr Harnagel’s teaching career which can be found in a Palisch family history binder we have in our museum’s research library.

Here is a later photo of the Gotthold Harnagel family that was taken in 1928 at the time of Rosalie’s death.

I am reasonably sure that David is in the photo, but I cannot positively identify which one he is, although my best guess is he is the fourth one from the left.  Here is another photo taken of Herr Harnagel 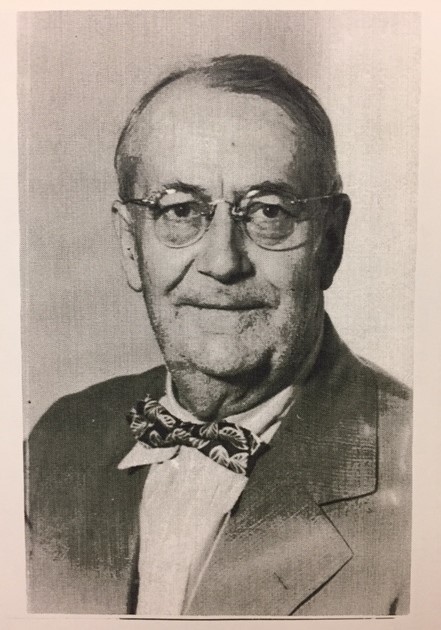 David died in 1972; Christine died in 1991 at the age of 103.  Here is a photo taken on Christine’s 100th birthday.  They are buried in Rose Lawn Memorial Garden in Crystal City, Missouri. 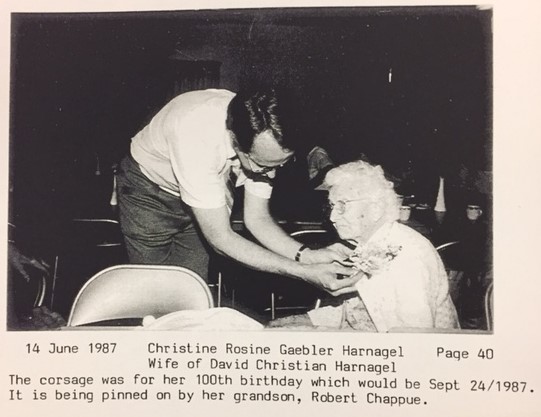 One more thing.  A book has been written by another German who lived on the Harnagel property.  It is titled, My Farm on the Mississippi, and is authored by Heinrich Hauser.