The father in this photograph, Frank Burroughs, was one of four Burroughs children who were “let out” by their mother around 1864.  After her husband died as a result of an injury while fighting in the Civil War, Sara Jane Burroughs remarried a man by the name of Donald.  However, this man also died by freezing to death while trying to get this family across the Mississippi into Missouri.  The story is that Sara Jane decided that she was so destitute that she could not care for her children.  It is said that she heard that the good folks of Wittenberg, Missouri were known for taking in orphans, so she took them there.  Indeed, several families in Wittenberg, with the help of Emmanuel Estel, did take in these foster children and raised them as their own.  As a result, our German Family Tree now has about seven pages of people with the Burroughs surname.  A lion’s share of those pages come from the Band of Burroughs shown in the above photo.

In the case of Frank Burroughs, he was raised by Gottfried and Hanna Roediger.  This family also took in Frank’s youngest brother, Henry.  Frank was about nine years old and Henry just one year old when they were “let out” by their mother.  Frank and Henry were baptized on August 4, 1864 at Trinity Lutheran Church in Altenburg.  Here is the baptism record of those two children.

On January 17, 1878, Frank married Marie Schmidt at Concordia Lutheran Church in Frohna, Missouri.  Marie was the daughter of David and Christiane (Hecht) Schmidt.  This couple would have ten children, two of which died before the above photo was taken.  I am guessing that the photo was taken sometime around 1900 or shortly thereafter.  The youngest daughter in this photo, Agnes, would die in 1909 at the age of 12.

Frank farmed a piece of property just north of Frohna.  It can be seen on this 1915 land map.

Frank Burroughs was also elected three times to serve as a judge for Perry County.  Here is a photo of him taken about the time when he served as judge. 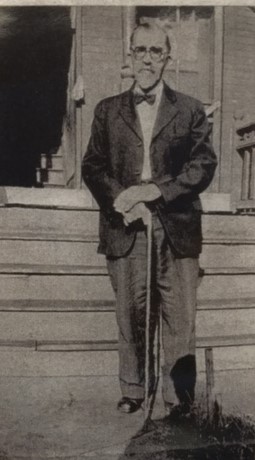 One of Frank’s sons was married on this day in 1910.  The groom was Otto Burroughs and the bride was Magdalene Mueller.  Here is their marriage license.

If we go back to the original Burroughs family photo at the top of this article, my best guess is that Otto is the one standing in the back row on the left.  Either that or he is the one standing at the very right.  We also have this wonderful studio photograph of what is described as the Frohna Band.  Reportedly, Otto is a member of this band.

I wish the men in this photo were identified, but they are not.  Maybe some of our readers may help our museum identify some of them when they see this photo today.  I will once again make a guess at which one is Otto.  I think he is the man fourth from the left in the back row playing what looks to be a tuba.  Someday, I may get my friend, Dale Burroughs, to identify for sure which one of these men is his grandfather.  I am constantly amazed by a band like this.  Many of the men in this photo must have been farmers.  It is beyond my understanding how this bunch of men not only learned to play these instruments, but also found the time to get together to practice and perform as a band.

Otto and Magdalena had five children.  I will highlight two of them, Harold and Marvin, mainly because I have a few photos.  Here is a photo of these two brothers that was taken when they were children.  They were accompanied by their father and a cow. 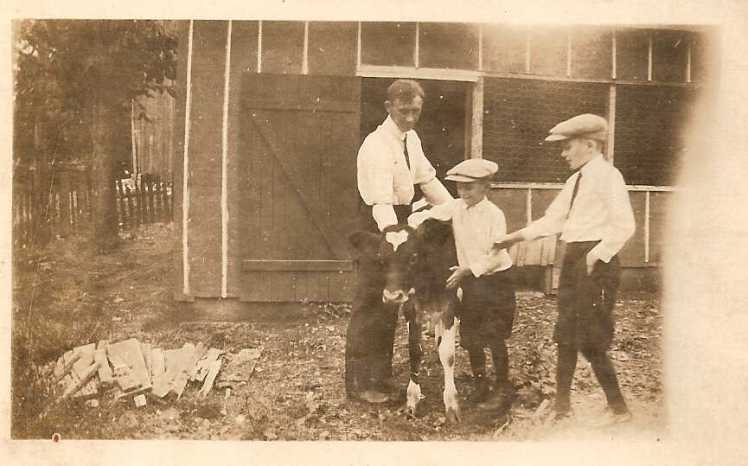 Marvin is the younger of the two brothers.  All three are pretty well dressed to be handling a cow.  Next we have this picture of these two brothers when they are older, but once again they looking quite dapper, considering the fact that this photo was supposedly taken at the Pevely Dairy in Crescent, Missouri. 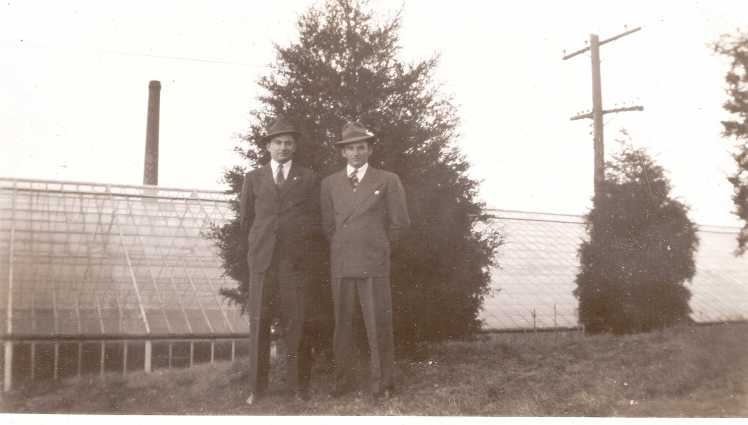 One more photo shows Marvin milking a cow.  I love pictures like this.  We rarely see photos like this showing people doing the dirty work on a farm. 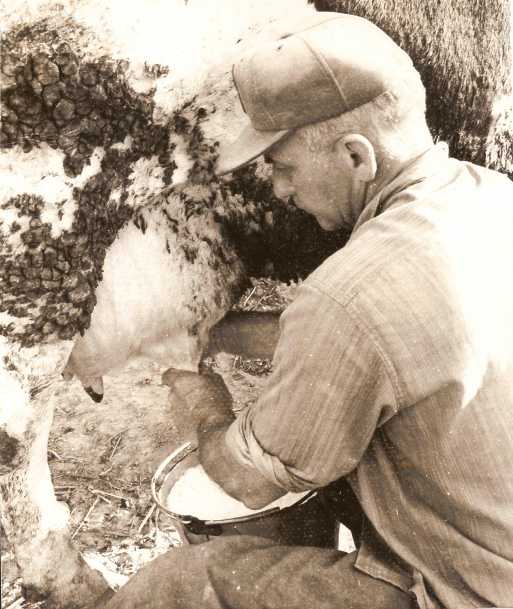 I’m going to leave you with some words that were spoken by Otto Burroughs in a handwritten (by another person) account of his family history that we have here at our museum.  I will not correct any grammatical or spelling errors within this account.

“So where ever father came from does not matter, but this much we can say, that the good Lord, always had ways to bring soul’s to His Kingdom, as there was the life of that Burroughs family.  It may seem almost unbelieveable to young folks of to-day, for how life is to-day and was than 100 yrs ago.”

5 thoughts on “A Band of Burroughs…..And Burroughs in the Band”