Two prominent families in the city of Wittenberg, Missouri during its heyday were the Lueders and Weinhold families.  Previous stories have been written about both these families.  Today’s birthday girl was the product of a marriage between members of these two families.  That couple was made up of Otto Lueders and Lydia Weinhold.  Although Otto was four years older than Lydia, we know that these two attended the same school at least for part of their education.  In this photo of a class at the Wittenberg Public School, we can find both Otto and Lydia.  Otto is the one who has the number 2, and Lydia is number 3.  According to my calculations, this photo was probably taken sometime in the early 1890’s.

Otto and Lydia were married on July 10, 1904 at the relatively new St. Paul’s Lutheran Church in Wittenberg.  In fact, this is the first marriage recorded in St. Paul’s church books.  Here are the records for the 1904 weddings at St. Paul’s.

It is said the railroad also started running through Wittenberg in July of 1904.  Here is a photo of this couple at their wedding.

This couple would have four children.  The second-born, Hilmer, died after just six months.  The others were named Harold, Alfred, and Oda.  Oda was the youngest, and she is today’s birthday girl.  She was born on September 30, 1912.  Here is the record of Oda’s baptism at St. Paul’s Lutheran Church.

I selfishly included my father’s baptism record in this photo.  He was about three months younger than Oda.  Here is a photo of the Lueders family when Oda was quite young.  She is being held by her mother, Lydia.

Before Otto was married, he operated a livery stable which was located right next to his house.  Later, he would take over for his father and operate the Lueders Store.  In 1915, the store was sold to Louis Boehme and Adolph Thurm, and Otto went to work at his father-in-law’s mill.  Here is a photo which shows Otto as part of the milling crew in 1913 (although I question the date on the photo or the date of the sale of the Lueders Store). 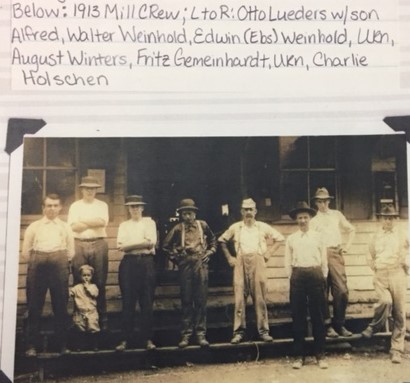 He eventually became president of that milling corporation when it was called the Wittenberg Milling Company.  Here is a share from that company with O.B. Lueders signing it as president.

We have this photo of one of the streets in downtown Wittenberg. 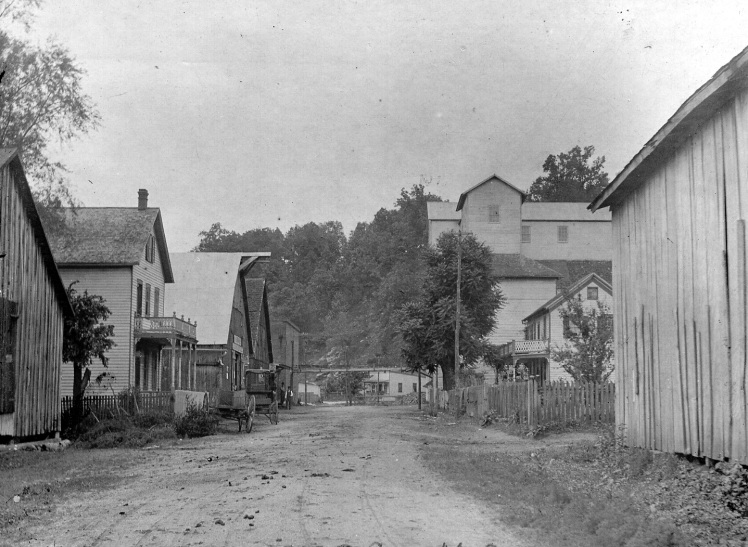 Otto lived in the house on the left.  Behind and next to it is the barn that was the location of his livery business at one time.  Across the street, the tall building in the back is the mill.  The home on the right was a Weinhold home. This was Oda’s neighborhood when she was growing up.  Here is a photo of Oda when she was still fairly young.

Wink…Wink….  I wonder if my dad ever gave this pretty girl the eye when he was young.  He must have attended school with her.

In 1918, Otto registered for the World War I draft.  Here is an image of that form.

What is interesting about this form is that Otto not only filled out the form for himself, but is also the registrar for the forms.  I have seen his signature on plenty of these forms filled out by men in the Wittenberg vicinity.

I can think of several reasons why the Lueders family would have moved to Ft. Wayne.  First, their son, Alfred would become a Lutheran minister.  They may have moved so he could attend the Lutheran college there.  Also, Lydia’s sister, Agnes Feiertag, lived there where her husband was a Lutheran teacher.  And if you look at the above death certificate, the doctor who signed it is Dr. A.G. Lueders, who was Otto’s brother and had a medical practice nearby.  Lydia’s body was brought back to Wittenberg and buried in St. Paul’s Cemetery.

In 1929, Otto remarried.  His second wife was a widow by the name of Bertha (Vogel) Richter who had both Perry County and Wittenberg connections.  That would also mean that Otto would become the stepfather of three Richter sons.

Oda was married in Indiana in 1935 to Arthur Buchanan, a filling station operator.  Here is their marriage license.

Here is a wedding photo of Oda and Arthur.

This marriage would end in divorce in 1942, and Oda would marry again later that year.  Her second husband was Fred Baatz.  Here is their Indiana marriage license.

I found this photo of Oda and Fred taken later in life.

Oda’s father, Otto, died in 1964 and is buried in the Roselawn Cemetery in Auburn, Indiana, with his second wife, Bertha.

We also have this photograph of Oda taken when she was 87 years old.  By then, she was a widow.

Oda died in 2004 and is buried with Fred in the Lindenwood Cemetery in Ft. Wayne, Indiana.

There are quite a few days when I struggle to find photos to go along with the stories I write.  Not so today.  I not only found plenty, but I had to make the decision to not publish some of the ones I found.  I hope you didn’t find the use of photos excessive.