Two brothers, both shoemakers, were part of the Gesellschaft that came to America in 1838-1839.  They were the Richter brothers from Kolkau, Germany.  They came to America aboard the Copernicus. Here we see these two brothers shown on the passenger list of that ship.

You can find Kolkau on the map below.  It is one of the red arrows.

You can see it is near the village of Seelitz (another red arrow).  One of the settlements in Perry County was named after Seelitz, and Rev. Ernst Moritz Buerger was the first pastor ofthe Seelitz congregation in Perry County.  Rev. Buerger’s father was the pastor in Seelitz, Germany for many years, and his son was his assistant pastor for a while.  In the early 1830’s, Rev. Ernst Moritz Buerger took a call to the church in Lunzenau, which is another red arrow on the  map.  All of these villages were in the same general vicinity in Germany.

Many of the passengers on the Copernicus settled in the Seelitz community in Perry County, including the two Richter brothers.  The Richters were the first owners of lots #8 and #22 in Seelitz as can be seen on this list found in Zion on the Mississippi.

Here is the portion of the map of property ownership in the area which was named Colony Seelitz. 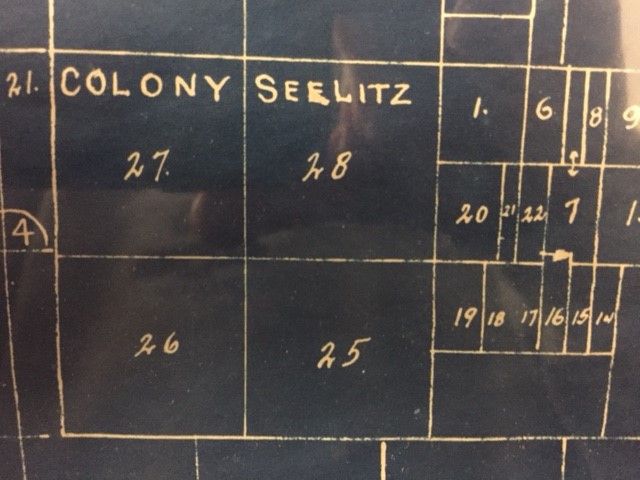 These two Richter brothers were not in Perry County very long.  In 1843, they sold their land to Johann Gotthold Darnstaedt and moved to St. Louis where they became members of Old Trinity Lutheran Church, which by then was Rev. C.F.W. Walther’s congregation.

If you look carefully, you will see that Rev. C.F.W. Walther was the pastor for that wedding.  Then later in 1844, on this date, October 26th, they had their first child, Ernst Traugott Richter.  It is his story we tell today.

Meanwhile, in 1841, Rev. Buerger took what was left of his family (his wife had died) and was on his way back to Germany along with Adolph Marbach’s family.  However, on their way to New York, they stopped in Buffalo, New York where a group of Lutherans managed to talk Rev. Buerger into being their pastor.  A few years later, he remarried.  His next wife was Ernestine Salome Meissner, and she blessed his with several more children.

On May 22, 1850, a daughter was born to the Buergers in Buffalo, New York, by the name of Maria Magdalena. In 1860, Rev. Buerger was the pastor of a congregation in Washington, D.C.  The Buergers were in our nation’s capital during the very tempestuous times of the Civil War.

Now we see where a Richter and a Buerger manage to get together again.  In 1868, Ernst Traugott Richter married Maria Magdalena Buerger.  They were married in our nation’s capital.  I cannot see the original record, but I can find this notation on Ancestry.com concerning this wedding. 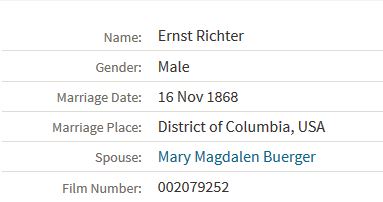 This photo was taken in Washington, D.C. during the Civil War days.

Ernst Traugott Richter became a Lutheran pastor.  The 1880 census indicates that Rev. Richter was a pastor and living in the Bonhomme Township in the St. Louis area.  I am not sure which congregation he served.  We do not have an 1890 census available, but by the 1900 census, Rev. Richter was a Lutheran pastor in another Washington……this time Washington, Missouri.  He was still there for the 1910 census.  It appears that the Richters had four children, one of which also became a minister.

In the 1920 census, the Richters were living once again in the St. Louis area in the Maplewood neighborhood.  By this time, Ernst was 75 years old and had apparently retired from the ministry. 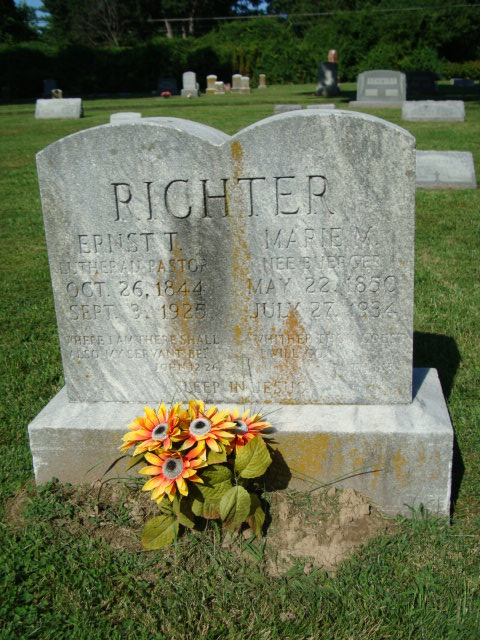 The Richters and the Buergers started out fairly close to one another in Germany.  Once in America, they started out together in Seelitz but then drifted apart.  However, this marriage in our nation’s capital brought them back together again.