Johann Gottlieb and Johanna Christiana Palisch came to America with six children in 1839.  In addition, Johanna was quite pregnant with her seventh child when she sailed on the Johann Georg.  That child, Martin Stephan Palisch, who was named after the leader of the immigration, was born on April 3, 1839 in St. Louis, only to die a few weeks later on April 19th.  After one more son and one more daughter, born in 1841 and 1842, their 10th child was born on this day, December 15th in 1844.  His name was Moritz Friedrich Palisch.  He was baptized in the Palisch home.  Trinity Lutheran Church had yet to finish building its first sanctuary which was completed in 1845.  Here is Moritz’s baptism record from the Trinity church books.

I find the list of Moritz’s sponsors to be somewhat interesting.  They were Gottlieb Hoehne and Gottlieb Zeibig, who were neighbors of the Palisch family, and Maria Hemmann of Uniontown.  I find the inclusion of Maria to be somewhat puzzling.  I cannot figure out the connection between the Palisch and Hemmann families so early in the history of East Perry County.  I do know that J.G Palisch and J.G. Hemmann were two of the more prolific fathers from that era, both having children numbered in the double digits.

We do have this picture of the parents of Moritz Palisch. 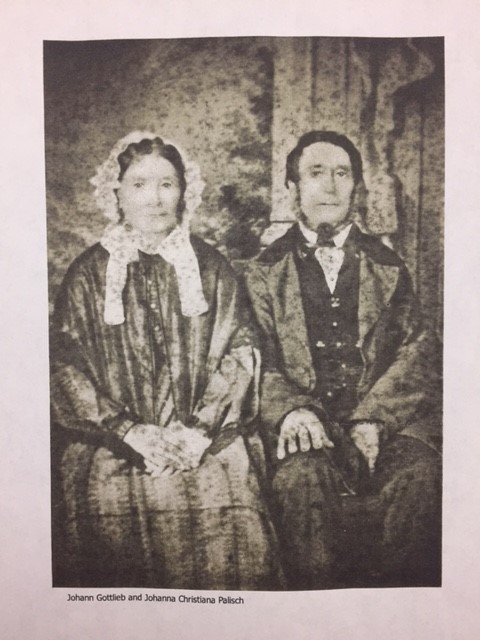 Upon arrival in Perry County, the Palisch family took up residence in the settlement named Dresden.  Here is a map of that area just east of Altenburg, along with a list of the landowners. 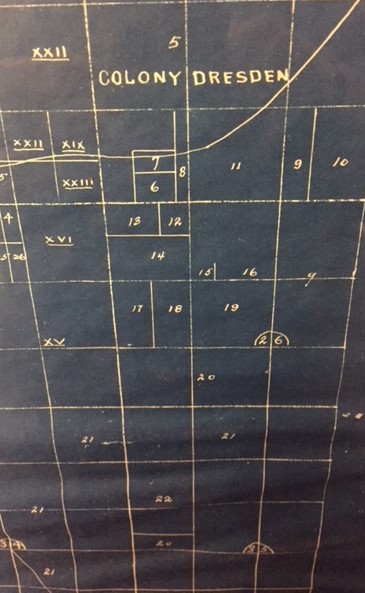 When Immanuel Lutheran Church in Altenburg was established in 1857, the Palisch family became charter members.  On November 5, 1868, Moritz married Pauline Koenig at that church.  Here is the record of their marriage in the Immanuel church books.

We have this photo of this Palisch/Koenig wedding. 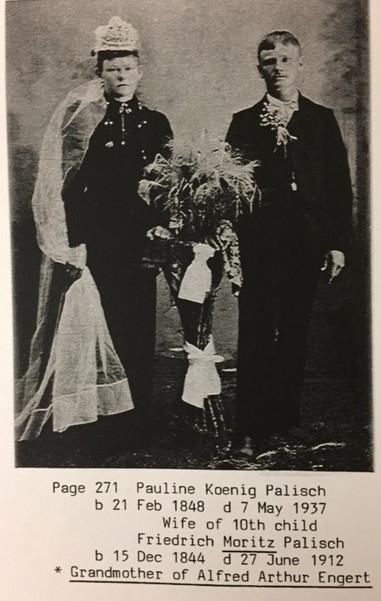 In this 1880 census, Moritz and his family were living with his father.  His mother had died a year earlier in 1879.  Five of the eight children born into Moritz’s family were also living in that household.

Here is a photograph of Mortiz which was taken later in his life.

In the last census in which we find Moritz, we find some interesting people included in his household.

Emma Mueller was a daughter who had married Karl Benjamin Mueller, but he had died in 1909, so Emma and her daughter, Amanda, went to live with her parents.  Also, another daughter, Liberty, died in 1906 at the age of 33.  Liberty’s husband, August Engert, was admitted to the state mental hospital in Farmington, Missouri, so two of her children, Edwin and Flora, went to live with their grandparents.

Moritz was a farmer during his life and lived in that same Dresden area that his father had farmed.  We see on this 1915 land ownership map where several Palisches are shown owning different parcels of land.

Moritz Palisch and his family take up five pages in our German Family Tree.  In order to include all the other Palisches that came from the original Palisch patriarch, many more pages were needed.  You will find quite a few Palisches living all over the country that have their roots here in that original colony of Dresden.