Today’s post is, as promised, a continuation of yesterday’s story.  We told the saga yesterday of the Motz family of carriage makers who were part of the 1839 German immigration to Missouri.  We ended that story by telling how Henry and Laura Motz were buried in the Concordia Cemetery in St. Louis.  We said yesterday that there were 7 children born into that family.  Today, we will begin by following the firstborn child of that family.  Her name was Laura Motz, and she was born on January 28, 1872.  Her grandmother, Carolina, had named her first child Carolina.  Now her mother, Laura, was naming her Laura.  That is something you do not see very often these days…..a daughter named the same as the mother.

Holy Cross was practically across the street from the location of Concordia Seminary on Jefferson Avenue.  In the early 1890’s, Laura Motz must have caught the eye of a young Seminarian by the name of Christopher Drewes who hailed from New York.  Christopher Drewes was born on this day, January 12th, in 1870.  That young man completed his studies in 1892, and on October 9th that year, he and Laura were married at Holy Cross.  The rookie pastor took his first call to a church in Memphis, Tennessee.  Although I could not find definite proof, I think the only Lutheran church in Memphis was the downtown church, Trinity Lutheran Church.  I will interject here that Old Trinity Lutheran Church in St. Louis recently got a new pastor, and his last previous call was at Trinity Lutheran Church in Memphis.

In 1894, Rev. Drewes moved up the Mississippi River by taking a call to a Lutheran church in Hannibal, Missouri.  I am thinking that his congregation was probably St. John’s Lutheran Church.  Here is an image of the 1900 census from Hannibal that shows the Drewes family.

Please note that their oldest son was born while in Memphis, and then two more children had been born in Hannibal by the time of this census.  Then Pastor Drewes made his final move when he took a call to a congregation in St. Louis in 1905.  He became pastor of Bethany Lutheran Church.  Rev. Drewes became quite a notable personality in the Lutheran Church-Missouri Synod.  If you look at the Today in History page published by the Concordia Historical Institute for today, you will see that he is listed as a renowned person who was born on January 12th in 1870.

Also, Rev. Drewes gets mention in a book titled the Lutheran Cyclopedia which lists famous people involved in Lutheran history.  Here is his biographical information as recorded in that book.

He was both an author and a member of synodical boards who apparently had a heart for missions, especially that of reaching out to the black community.

Pastor Drewes died in 1931; Laura, his wife, died in 1936.  They are buried in the St. Trinity Lutheran Cemetery in St. Louis.  I will show their gravestones later.  However, that is still not the end of the story.  We need to take this to the next generation.  One of the sons in this family was Theodore Drewes.  This son first gained notoriety by becoming a tennis star.  In this 1917 issue of the St. Louis Post Dispatch, we see the story of a teenage tennis phenom who is already winning prestigious tournaments.

At about the same time as this article, Ted filled out his World War I draft registration form which indicates that he was employed as a clerk at Wagner Electric Company.

It must have been the type of building like you may remember from the famous movie, It’s a Wonderful Life.  Here is the film clip of that scene.

That is still not Theodore Drewes major claim to fame.  In 1929, Ted Drewes opened his first store in St. Louis that sold frozen custard.  That store started in the north end of St. Louis, but he eventually opened locations at the south end whose popularity took off.  The Ted Drewes Frozen Custard company has become one of the most popular businesses in the St. Louis area for both residents and tourists.  Its frozen custard has even been declared recently as the best ice cream in America.

Ted Drewes had a son who was named after him.  Ted Drewes, Jr. took over the frozen custard business from his father.  Ted, Jr. is now getting up there in years and has handed over the operation to his son-in-law, Travis Dillon.  Here is a menu for Ted Drewes as you find it today (although it is closed for the winter).

One of the featured items on the menu is called a concrete.  It consists of a frozen custard shake that is so thick they hold it upside down before serving it to the customer.

In 2016, a special report was shown on the TV show Dateline.  It heralded the quality of frozen custard that was produced in the Ted Drewes stores.  Here is a video of that segment.  You will discover more about the history of Ted Drewes Frozen Custard by watching this video.

Ted Drewes, Sr. died in 1968; his wife, Mildred, died in 2002.  They are also buried in the St. Trinity Lutheran Cemetery in St. Louis.  Here we see a collection of the grave markers for people in the Drewes family. 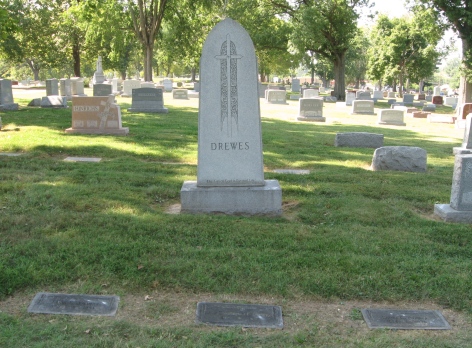 So there you have it.  You and I have learned two important things about this famous Drewes family from St. Louis.