My wife and I are spending time with our daughter’s family in Johnson City, Tennessee for a few days.  Today, because of the holiday that gets our grandchildren out of school, we are being taken to North Carolina for a day trip to Mount Airy, North Carolina, which is a small town that likes to go by the name, Mayberry, U.S.A.  It is the boyhood home of Andy Griffith.  I am really looking forward to our visit there.

That also means I do not have much time to write a post today, so I am doing a quick one.  First, I will show you a map of this general area showing some important places that I would like to discuss.

Johnson City can be found on the top left on this map.  In addition to Mount Airy, I have highlighted the city of Conover, North Carolina and Rowan County, which is outlined in blue.

Conover was a location where there were plenty of Lutherans…..even before the advent of the Lutherans to Perry County.  Conover was also the location of an early Concordia Seminary.  Here is a photo of that educational institution.

Not far from Conover, you will find Rowan County.  That county is actually an important place in the history of Perry County.  It was the home of most of the Presbyterians that arrived in Perry County prior to the German Lutheran immigration of 1839.  The North Carolina Presbyterians arrived in Perry County around 1820.  They became instrumental in Lutheran history because they were so helpful to the German Lutherans during those first years by coming to their aid when they when they were suffering great tribulation. 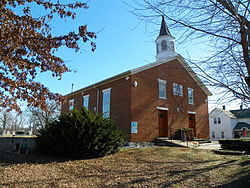 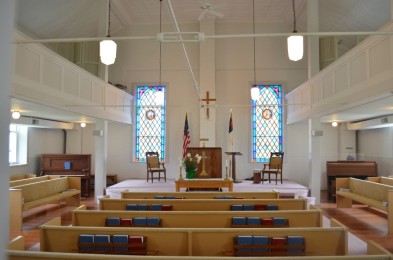 Both structures use a rather unusual system of supporting pipes to help keep their buildings sturdy.

When the Presbyterians decided to migrate to Missouri in the early 1800’s, I wonder which route they took.  Maybe they came through the area of Johnson City, Tennessee.  Not far from Johnson City, you can find the city of Jonesborough.  That city claims to be the oldest city in Tennessee.  Here is a national register sign for that city telling a little about their history. 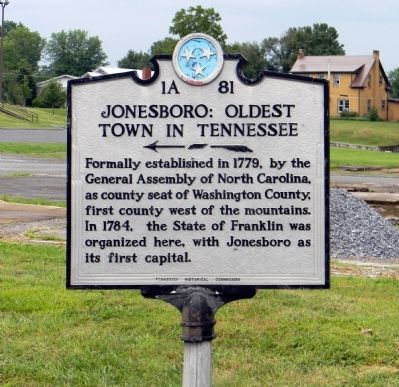 Located in Jonesborough is a building known as the Chester Inn.  This building was already doing business, giving travelers a place to stay, in the early 1800’s.

Could the pilgrims from Rowan County, North Carolina have stopped here on their journey to Perry County.  I suppose it is possible.

That’s all I have time for today.  I’m being beckoned to get into a car for a trip to Mayberry.  I hope to see Barney Fife and Aunt Bea.  And maybe I can find one of those stills that Barney and Andy never found.

One thought on “Off to North Carolina Today”