There are 15 pages in our German Family Tree that come from today’s birthday boy.  His name was Gottlieb Boxdorfer.  Gottlieb was born on February 7, 1820 in Weidnitz, a small village in Bavaria, a region of Germany.  This is a map showing the location of Weidnitz.  It also indicates the city of Dresden, where Rev. Martin Stephan was a pastor when he organized the 1839 immigration.

Gottlieb was not part of the Gesellschaft.  When he did make the voyage to America several years later, there are some puzzling questions about some of the records that document that immigration.  The passenger list below for the ship, America, which arrived in Baltimore, Maryland, shows a person by the name of Gottlieb Boxdorfer.

Before this image was recorded, it looks like someone had printed the name Boxdorfer on it.  There are several of these kinds of notations on this passenger list.  In the red box, right under Gottlieb’s name you find the name Barb. Münch, also from the city of Weidnitz.  She would become the wife of Gottlieb after they arrived in the United States.  A document that shows this maiden name is the death certificate of their oldest son, Henry Boxdorfer.  Here is an image of that document.

In the lower left, you can see the maiden name of Henry’s mother.  This document and the above passenger list present a problem.  In the blue box on the passenger list, it indicates the date of 24 October, 1846.  On the first page of this passenger list, we see the notation shown on this image.

In this blue box, we see once again in what appears to be a later note, the date of Jan’y 9, 1847.  What does this mean?  On the one hand, it might make sense to say that the ship left Germany on October 24th in 1846 and arrived in Baltimore on January 9, 1847.  However, there are numerous records, including Henry’s death certificate above, that indicate that Henry, their firstborn, was born on February 3, 1846 in Baltimore.  Neither one of the dates on the passenger list back up that birth taking place in Baltimore in early 1846.  I am indeed baffled.

This set of circumstances has all the earmarks of being another case where a man and woman who have intentions of getting married, but they make the trip to the United States to actually go through with the marriage.  In those days, there were bureaucratic and financial difficulties with getting married in Germany.  Many times, couples would choose to come to America where it was easier and less expensive to get married.  Family history indicates that this couple was married in Baltimore.

In the first census that I was able to find for Gottlieb, he was located in the Bois Brule Township in Perry County, Missouri.  Here are the two images from that census (they were listed on two separate pages).

According to this census, Henry was the only son born in Maryland.  Two years later, John was born in Ohio.  The Friedenberg records, which were reconstructed after a fire destroyed them, say that the Boxdorfers were in Cincinnati.  There is a problem with this census.  Anne is listed out of order at the age of 9, and she is shown to be born in Missouri.  She would almost certainly have been born in Ohio, and the Friedenberg records agree with that.  After three children were born in that state, they moved to Missouri.  Margaret is the first child born in Missouri.  If you do the math, this census indicates the Boxdorfer family must have moved to Perry County between 1855 and 1857.  However, another monkey wrench gets thrown in here.  The Friedenberg records show that George was born in Missouri, not in Ohio, so this family may have moved to Missouri a year or two earlier.

In the German language, one word for farmer is landwirt.  On the passenger list shown above, it appears there may be some form of landwirt shown as Gottlieb’s occupation.  Regardless, when Gottlieb got to Perry County, he became a farmer, as indicated in the 1860 census.

The German Family Tree shows that there were 7 children born into the Boxdorfer family.  Two of these children were Anna Margaretha (born in 1851) and Eva Margarita (born in 1857), and I have found that those two are sometimes mixed up on some family histories on Ancestry.com.  What makes these two even more susceptible to confusion is the fact that each one of these Boxdorfer daughters married Sandler boys.  Anna Margaretha married William Sandler in 1870.  Eva Margarita married Peter Sandler in 1878.  Peter Sandler’s story was told in the post titled, Sandler the Smithy.

In 1866, the Boxdorfers left the Friedenberg congregation to help found a new congregation in Perryville…..Immanuel Lutheran Church.  They were charter members of that congregation.  In 1888, Barbara Boxdorfer died.  A few years after her death, Gottlieb, at the age of 71, applied for a passport to go back to Germany.  Here is an image of that passport application.

There are a few other tidbits of Gottlieb’s history to be found on this document.  For one, it says he received his citizenship when he was living in Cincinnati  in 1852.  It also states that Gottlieb was only 5 foot 4½ inches tall.  One thing that just amazes me is that this document shows that Gottlieb does not remember the name of the ship that brought him to America when that ship was named America.  I do not know if Gottlieb made that trip to Germany, nor do I know why he would have made such a trip, especially at such an old age.

Gottlieb died in Perryville in 1901.  A notice was put in a local newspaper concerning his death.  Here is that article.

This article states that Gottlieb had been living with the William Sandler family for the previous 4 years.  However, we do not find him listed with that family in the 1900 census.

Gottlieb and Barbara are each buried in the Immanuel Lutheran Cemetery in Perryville, but they are not buried together.  Here are their gravestones. 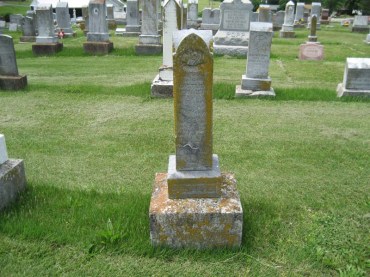 As mentioned before, our German Family Tree has 15 pages of descendants from Gottlieb and Barbara Boxdorfer.  That does not include the descendants that came from the daughters in that family.  They would be listed under the surname of their husbands.  For example, the descendants from the daughters that married Sandlers would be found under the Sandler surname in the German Family Tree.  Therefore, there are even more than 15 pages of Boxdorfer descendants.  That is certainly a bevy of Boxdorfers.