It is a week of getting interesting visitors here at our museum.  Yesterday’s post referred to our friends, the Wittenberg Cousins.  Today, we have two ladies in our midst who I refer to as rock stars of Perry County family research.  Their names are Lori Adams and Diane Anderson.  If any of you spend any time doing research on Ancestry.com and start looking for people with Perry County, Missouri or Jackson County, Illinois roots, you have probably run across Lori Adams’s family tree called the Fritsche-Miesner Tree or Diane Anderson’s family tree called the GerlerAnderson Tree.  I use these two family trees regularly when researching for my blog posts.  It is a real treat for us to have these two knowledgeable ladies in our building today.

We took a photo of our research crew from the museum along with these two ladies today.  Lori and Diane are the roses amongst the thorns.

Lori Adams (on the left) lives in Phoenix, Arizona, and it is a rare occurrence when she shows up in Missouri.  Diane Anderson (on the right) lives in Ava, Illinois which is only about an hour away.  We are thrilled that both of these researchers decided to visit us today.

It just so happens that today is also the birthday (possibly) of one of Lori Adams’s ancestors.  Her name was Franziska Maria Engert, and her death record says that she was born on April 12, 1835 in Lunzenau, Germany.  When Franziska was four years old, her family came to America as part of the Gesellschaft in 1839.  She sailed aboard the Johann Georg.  Here is an image showing her on the passenger list.

Franciska’s parents were August Friedrich and Christiane Eleonore (Matthes) Engert.  According to our German Family Tree, Franziska was the third child of this couple, but there is evidence that another child was born and died in Germany that doesn’t show up in our records here.  The story of August Friedrich Engert was told in a previous post titled, Another Fertile Father.  He was married twice, and between the two wives, he is credited with fathering 23 children.  So you see that Franziska was one of the earliest ones.

On April 15, 1858, Franziska married Karl Fritsche at Immanuel Lutheran Church in Altenburg.  That was just the second marriage recorded in the Immanuel Lutheran church books.  Here is an image of that record.

We also have the civil record for this wedding.  Here is an image of that.

We have six children recorded in our German Family Tree for this couple.  I am just going to follow one of those children to work my way to Lori Adams.  That child was Robert Fritsche.  He was born on February 8, 1866 and baptized at Immanuel Lutheran Church.  When Robert was just two years old, his father died, leaving Franziska a widow.  A year after his death, the 1870 census shows the Fritsche family living in the same household as the August Degenhardt family.  August was married to Bertha Engert, Franziska’s sister.

Then in the 1880 census, we find just Robert living with the Degenhardt family.

In 1888, Robert married Magdalena Darnstaedt at Trinity Lutheran Church in Altenburg.  Here is a photo of Robert when he was rather young.

Not long after this marriage, Robert and Magdalena moved across the Mississippi to the river bottoms around Jacob, Illinois where Robert was a farmer.  Franziska moved to that area too later in her life, and she is buried in the Christ Lutheran Cemetery in Jacob.

One of the children of Robert and Magdalena was Arthur Fritsche, who was the grandfather of Lori Adams.  Here is is a photo of Arthur.

A previous post was written about Arthur that was titled, A Fritsche-Miesner Connection.

One more thing:  We have one other source that indicates that Franziska’s birthday was on April 11th, not April 12th.  The source is Wilmar Degenhardt’s family research.  He traveled to Germany many years ago and gleaned some records from the Lunzenau Church where Franziska was baptized.  I will let you decide if that record or the death record for her in the Christ Lutheran church books has the correct date.

If you are wondering why today’s post is showing up so late, this photograph may explain my dilemma. 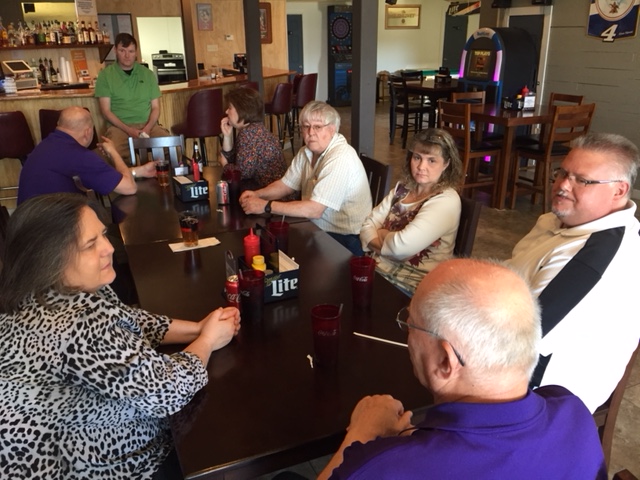