I confess.  I wrote the title of this post as click bait.  However, there is method to my madness.  There indeed were six Finger grandchildren, and there is a reason I state that they are “for free”.  It all starts with a wedding in Germany.  The marriage took place on April 20, 1881 in Lettin, Germany.  Here is an image of a portion of that marriage record. 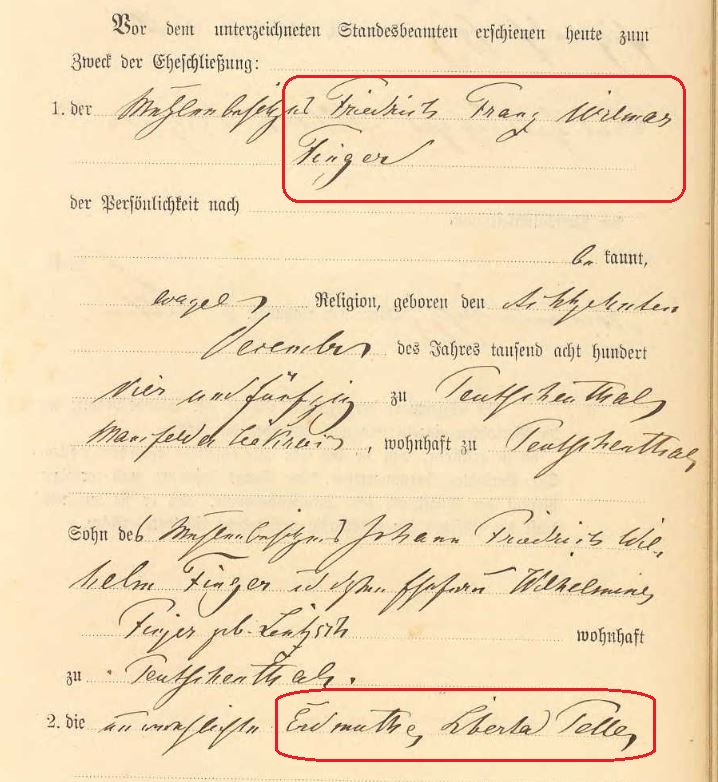 The red boxes show the names of the bride and groom.  The groom (the top box) was Friedrich Franz Wilmar Finger.  The bride (the bottom box) was Erduthe Liberta Telle.  Liberta in some records is listed as Liberty.  Or could we say with tongue-in-cheek…Free(dom).

This Finger couple had their first child in 1883 in Perry County, Missouri, so they must have come to America not long after they were married.  Their third child, Hugo Finger, was born on this day, May 21st, in 1886.  He was baptized at Immanuel Lutheran Church in Altenburg.  Here is his baptism record.  It takes two images.

I managed to find this photo which claims to be Hugo when he was rather young.

The 1900 census shows the Finger family living in Brazeau Township in Perry County.

In some previous posts, it has been noted that several young men from Perry County, most of them from Immanuel Lutheran Church, moved to Bremer County in Iowa around the turn of the century.  Apparently, Hugo became another one of those young men.  In the 1910 census, we find him working as a farm hand near Denver, Iowa, not far from Waverly.

One year after this census was taken, Hugo got married.  His bride was Bertha Hein.  These two images show the Iowa marriage record for this wedding.

We have this photo of the couple’s wedding.

Apparently, after this marriage, Hugo and his wife moved back to Perry County.  In 1912, their first child was born, and he was baptized at Immanuel Lutheran Church in Altenburg.

It is just a guess, but I think Hugo and his family were living on his parents’ farm in those years.  If so, this 1915 land map shows where that farm was located near Seventy-Six, Missouri.

Another child was born and baptized in Perry County in 1913, but after that, a few more children were born in Bremer County, Iowa.  Hugo and Bertha must have moved back to her home territory.  One document that proves this is Hugo’s World War I draft registration.  It shows Hugo living in Denver, Iowa, but also working for the Waterloo Gasoline Engine Works.

The 1920 census shows the Finger family in Waterloo, Iowa.

At that time of his life, Hugo is described as being a plumber’s helper.  After 1920, one more child was born in Iowa.  Then in 1926, their last child was born, and that child was baptized once again at Immanuel Lutheran Church in Altenburg.  The 1930 census shows the Finger family living in Perry County.

At the end of that year, December 7, 1930, Bertha died of tuberculosis.  Here is her death certificate.

Bertha was buried in the Immanuel Lutheran Cemetery in Altenburg.  Here is Bertha’s gravestone.

In 1938, Hugo married again.  His second wife was Caroline Grosse, the daughter of a blacksmith from Apple Creek, Missouri.  Here is that marriage license.

The 1940 census shows an interesting situation.  First, Caroline is found living with her widower father in Apple Creek.  One of Hugo’s sons from his first marriage is living there, and there is an infant child who was a product of his second marriage.  However, Hugo is not listed.  I could not locate him in another census.  Information on a family history on Ancestry.com indicates there may have been two more children born into this family.

The next document I found showing Hugo was his World War II draft card.

He was living across the river in Anna, Illinois and working for a company based in Marion, Illinois.  There is no reference to his wife, Caroline, on this form.

Hugo would die in 1961.  Here is his death certificate.  He died in Perryville, Missouri of prostate cancer.

If one would have thought Hugo and Caroline were divorced, this document indicates otherwise.  Caroline would die in 2001.  A Social Security document lists her last place of residence as Lakota, South Dakota.

Hugo and Caroline Finger are buried together in the Immanuel Lutheran Cemetery in Perryville, Missouri.  Here is that gravestone.

In conclusion, you might think that my title was not only corny, but wrong.  Hugo almost certainly had more that six children.  However, Grandma Liberty died in 1938, the same year of Hugo’s second marriage.  She was only alive for six grandchildren from Hugo. One other thing.  I think you would agree with me when I say this:  Just like the digits on my hands were busy writing this story on this keyboard….the Fingers were always moving, and one Finger in particular (my mouse-clicking finger) was doing several different jobs.