Yesterday’s story was about Gotthilf Frentzel.  Today just so happens to be the birthday of Flora Frentzel, Gotthilf’s cousin.  She was born four years after her cousin.  Like Gotthilf, she was baptized at Grace Lutheran Church in Uniontown, Missouri.   This is her baptism record.

There is also a birth record in a Perry County Birth Register.

Flora was the daughter of Victor and Pauline (Telle) Frentzel.  Two Frentzel brothers married two Telle sisters, and thus Gotthilf and Flora were cousins in a very unique way.

Flora’s story is going to lead us on a very interesting journey that takes us up to St. Louis with a little stop in California.  It will also lead us right back to downtown Altenburg before we are finished.

In California, Missouri, a boy by the name of Paul Griebel was born.  His birthday was December 21, 1881.  Here is his birth record.

John was the son of John G. and Flora (Klaehn) Griebel.  This birth record states that John G. was a farmer.  But an 1880 census which was taken a year before this birth, his occupation is shown as a Lutheran minister.

In 1892, Rev. Griebel became the pastor at Immanuel Lutheran Church in Perryville.  We find that family in the 1900 census from Perry County.

Johnie R is the son we are focusing on today.  However, there is another character in this census that has been included in a  previous post.  Emily Griebel married Rev. Martin Guemmer from Friedenberg, Missouri.  The post was titled, PK Marries PK – They Have More PK’s.

For some reason I could not find Flora Frentzel in any 1900 census.  I do know she was not living with her parents and siblings in Uniontown.  Flora and John got married sometime between 1900 and 1910.  I was unable to find any marriage record, which makes me think they were not married in Perry County.  I think we would have had a church record if that was the case.  They were also likely married sometime closer to 1910 because that is when their first child was born.

The 1910 census shows the Griebels living in St. Louis.  John was a metal worker.

John’s World War I draft registration tells us which metal company he was working for.

John’s place of work was the Mesker Brothers Iron Works in St. Louis.  The address for this business was 421 S. 6th St.  That would have been located not far from the present Busch Stadium.  It is shown where the orange marker is on this map.

The Mesker Brothers led me down one giant-sized rabbit hole, and that rabbit hole led me back to Altenburg.  Here is how.

The Mesker Brothers Iron Works was primarily in the business of manufacturing complete storefronts.  Many of these storefronts can be found in little towns all across America.  Here is an advertisement for Mesker Bros. from St. Louis. 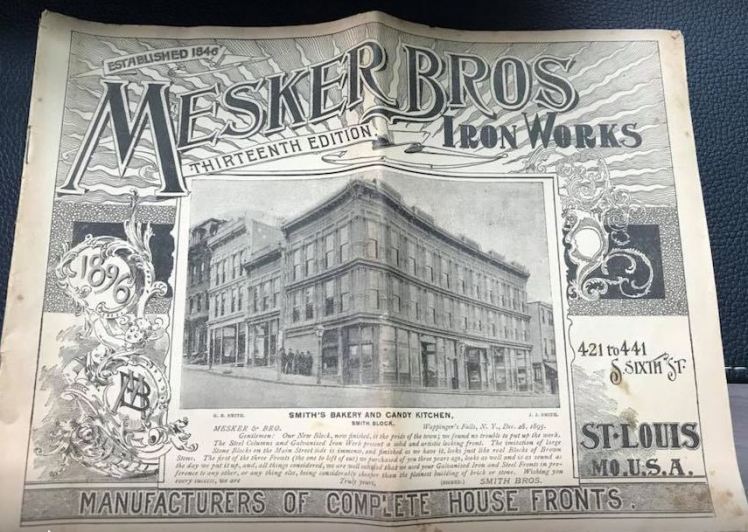 Two Mesker brothers ran this business in St. Louis, and another Mesker brother ran a similar operation in Evansville, Indiana.  I could write about these storefronts for the rest of the day.  Let me just point you in the direction where you can find more information if you would like to discover more about this business.  It is fascinating stuff.  First, there was a scholarly paper done by Hallie Fieser when she was a student in the historical preservation department of Southeast Missouri State College in Cape Girardeau.  By the way, her mother is a teacher at Altenburg Public School.  You can find Hallie’s paper using this link:

AT THE FOREFRONT OF STOREFRONTS: A LOOK AT THE LEGACY OF MESKER BROTHERS I RON WORKS AND GEORGE L. MESKER & COMPANY

I will be sharing a few of the images that come from that paper.

Another interesting place to find Mesker Brothers storefronts is on this Facebook page.

I suggest you go to the photos on that page and scroll down.  You will be scrolling for a while.  There are numerous examples of Mesker Bros. storefronts that have been posted there.

I found this diagram of a typical storefront to be very useful. 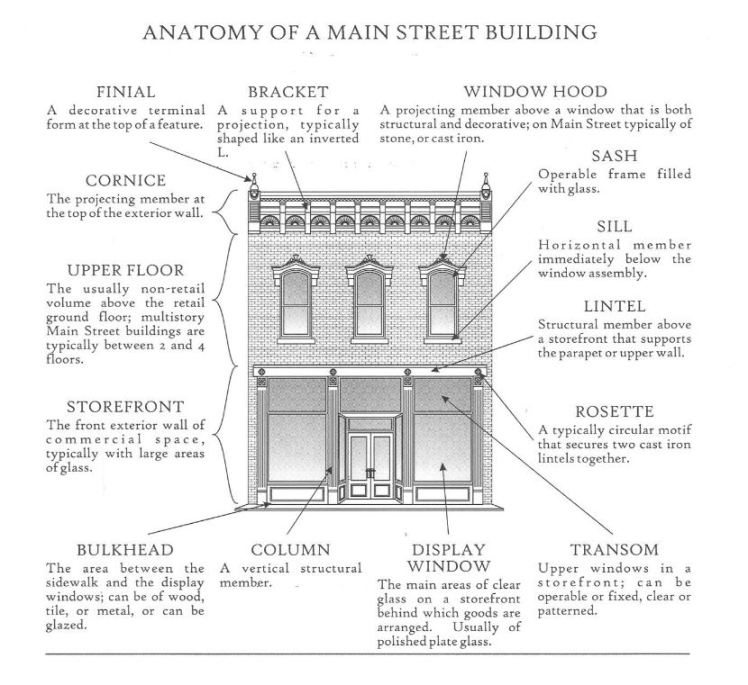 I find it interesting that Hallie, in the course of her research, managed to find two businesses with Mesker Bros. storefronts in Sylvan Grove, Kansas, which has been discussed on this blog as being one of our Perry County “outposts”.  Many Perry County natives ended up in Sylvan Grove.

The Mesker Bros. Iron Works received a gold medal at the 1904 St. Louis World’s Fair for their storefront designs.

Now we return to Altenburg.  A building on Main Street has been the subject of several posts on this blog.  It is now called Grayson’s Bar & Grill.  Previously, it had several names, including the Mississippi Mud Saloon.  This photo has been included in a previous post.

It turns out that this building can be included in a list of structures that have Mesker Bros. storefronts.  There are several characteristics of this building which can identify it as such a storefront.  I have taken a few more photos of this building today and am placing them in a thumbnail gallery.  You can click on the thumbnails to enlarge them.

In this older photo of this building taken in about 1900, you can see when this building was a hardware store, it still had a pair of filials on the top of the storefront.  They are no longer there. 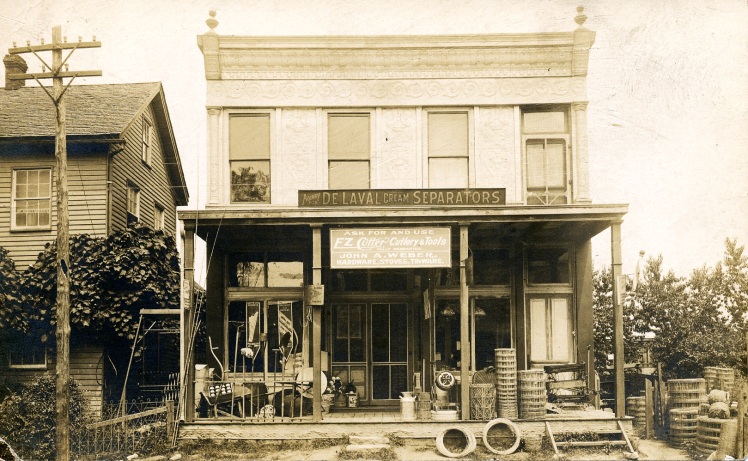 Also, as it turns out, there is another piece of Mesker Bros. work in downtown Altenburg.  It can be found on the old saddle shop, which was also the subject of a previous blog post.  In this case, I am told that the owner of this building found some antique Mesker Bros. items at an auction, purchased them, and attached them to the saddle shop.  Thus, this building cannot really be included as an original Mesker Bros. storefront, but it displays some of their product on its front.  Once again, I am placing a thumbnail gallery here.

The Mesker Bros. artifacts can be seen near the outside corners of this building.  The next time you take a drive down Main Street, Altenburg, please take note of these little pieces of small town American history.

I will close by saying this.  One of the real joys of writing stories for this blog is the fact that I get to learn new things on an almost daily basis.  I love to find stories like this one that lead me to see glimpses of American history which can not only be found locally, but all across the country.

One thought on “A Mesker Story”