I had today’s story all situated in my mind, with only one detail to figure out, when I decided to go down one last rabbit hole to look for that one detail.  In this case, I didn’t find the desired rabbit, I found a snake.  Suddenly the story looked a little more sinister, and I debated for a while whether to tell it.  I decided to tell the story because I wanted to share the process through which I went to discover the truth.

This will be a story from the Burroughs family.  The Burroughs family story is such an interesting one.  I have written a few other stories about people in this family.  Their story in Perry County started with several children being left in Wittenberg to be taken in by other families.  It’s a story that illustrates how the German Lutherans around here have always been about making sure the needy are cared for.  The Burroughs family actually goes back further in American history, and I have told the story before about how there was a Burroughs tied in with the famous Booker T. Washington.  Today, I will tell the tale of John Burroughs, who was quite young when his widowed mother left him off in Perry County back in 1864.

John Burroughs was born on January 9, 1861 somewhere across the river in Illinois.  His brother, Frank Burroughs would later write a note describing the Burroughs children and which families took them in.  We have a copy of that note in a Burroughs family binder in our library.

This note says the John was taken in by a man named Michael Proehl who lived near Frohna.  An 1870 census shows a John living with Michael Proehl, but it does not use his given name, Burroughs.

A Missouri census taken in 1876 also shows John living with Michael Proehl.  This time he is called John Burroughs.

On September 3, 1891, John married Wilhelmina (Minnie) Schulenburg at Trinity Lutheran Church in Altenburg.  Here is the marriage record that is found in the church books.

There is also this civil record of their marriage license.

Minnie was only 17 years old when this marriage took place, and Minnie’s mother, Juliana Rogalski, gave her permission for this marriage on the form.  Juliana has an interesting history of her own.  Minnie’s father, John Schulenburg, was Juliana’s first husband.  She would marry at least two more times.  Her next husband was Fred Rogalski, and following that one, she married Dr. John Neumeuller.  Dr. Neumueller’s first wife had blessed him with two children, one of them named Lydia.  Lydia married Charles Schulenburg, Minnie’s older brother.  I don’t know what you officially call the relationship between Charles and Lydia.  I will call them step-step-siblings.  For a short while they may have lived in the same household as some sort of siblings, but the two of them shared absolutely no genes with one another.

Meanwhile, I had to deal with different names for Minnie’s mother, Juliana.  Here are four different descriptions I found for her on Ancestry.com.

And if that isn’t enough, our German Family Tree gives her maiden name as Lindmann.

Here is where I started down the snake hole.  It looked to me like Hildegard Burroughs was out of place.  She is the only one among the seven whose name doesn’t begin with an “E”.  I had also seen in a later census record that Hildegard was shown as Hildegard E. Burroughs, so I really wanted to see the baptism record for this girl.  However, our German Family Tree only has six children listed in the Burroughs family.  Hildegard is missing.  I was thinking that the pastor at Trinity had forgotten to record Hildegard’s baptism.

Then I noticed in one of the family trees on Ancestry.com that there was a reference to the Immanuel, Altenburg church records.  When we finally opened those records to the right page, we found this.

I included the records above and below Hildegard’s.  In the second column, you will see that the top entry is the father’s name and the bottom is the mother’s maiden name.  In the case of Hildegard, there is no father’s name and the mother was Ida Weber.  This has all the looks of a child born out of wedlock, and that is what it is.  If you look closely, the child was born on December 4, 1916, but was not baptized until December 31st. The 1920 census shows Hildegard living with the Burroughs family.

Just who was this Ida Weber?  It turns out that she had somewhat of a similar childhood as John Burroughs.  Here is her baptism record found in the Immanuel church books.  It is in two images.  There is a lot of writing in the last column of the second image that I cannot begin to read.  I wish I knew what it said.

Here is a transcription of some of the information found in this record.

Carl Paul and Ida Emilie were born a few years earlier and were adopted by Fuerchtegott and Katharine (Boehme) Weber, and now they were being baptized in 1899.  I am guessing that they were a brother and sister.  Here is a photo of Ida.

If you do the math, Ida was 19 years old when she gave birth to Hildegard.  John, on the other hand, was 56 years old.  It appears that the devil was actively tempting people and sin was rearing its ugly head in this situation.

John had one more child, Elvera, after Hildegard was born.  And Hildegard did indeed have a middle name that started with an “E”.  However, contrary to all the rest, it was not her first name.  This family photo taken later shows all seven children and they are all labeled. 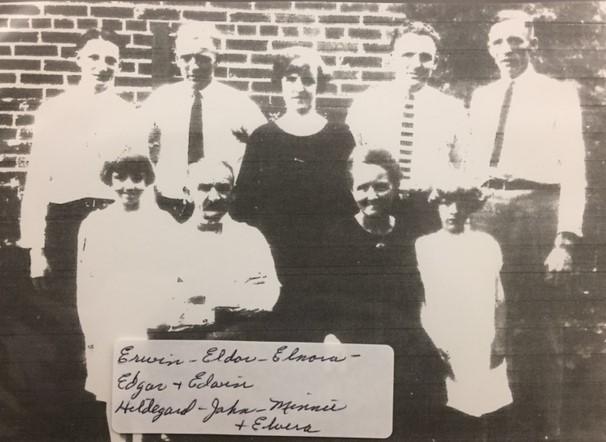 Sometime between the 1920 and 1930 censuses, John moved his family to St. Louis.  Regardless of where he lived, he always gave his occupation as carpenter.  In 1933, John died at the age of 72.  Minnie died in 1963 at the age of 89.  They are buried together in the New Bethlehem Memorial Park in St. Louis.

The Burroughs family story contains several examples of children who get a second chance by being accepted into other people’s families.  It appears that Minnie also gave John a second chance after his infidelity.

One thought on “The Burroughs Famil-EEEEEHE”