A while back, after we received a wonderful donation at our museum, I wrote a blog post titled, Celebrating an Anniversary in Style.  That post told the story of the 50th wedding anniversary of August and Maria (Roth) Lueders of Frohna, and included a photo that was taken on that occasion.  Here is that photo again.

This past week, our museum was sent another family photo by a friend of ours, Roy Fassel.  The photo he sent shows another Lueders family photo, also one which was taken at a 50th wedding anniversary.  This one shows the family of William and Theresa (Lehner) Lueders of Wittenberg.  In another recent post, documentation was shown indicating that August and William were brothers.  That post was titled, The Lueders Brothers.  Here is the William Lueders 50th anniversary family photo.

Below is a listing of the people in the above photo.  There are ages in parentheses which are approximate ages as calculated by Roy Fassel.  The Lueders children are in bold type.  Their spouses are in regular type. 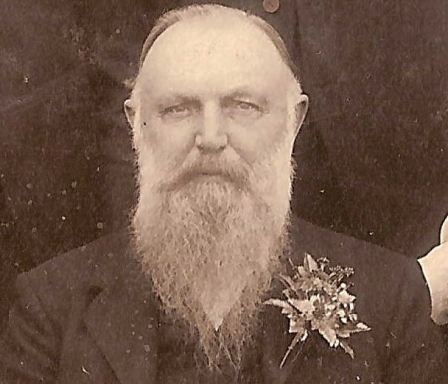 And here are the two wives of the Lueders brothers.

I have mentioned a few times in previous posts that I am in the process of writing a book.  Although I haven’t finalized this yet, the title is likely to be Wittenberg ’03:  Coming of a Church.  This fictional book will tell stories that took place in 1903 in Wittenberg.  If I follow through on my plans, a second book will follow which will tell stories that took place in 1904.  Two of the main characters of the book will be Otto Lueders and his future wife, Lydia Weinhold, who got married in 1904.  Here is an enlargement of this couple from the William Lueders photo.

You can see that the children and their spouses are also wearing special “jewelry” on the occasion of their parents’ anniversary.  Similar items can be seen in the August Lueders photo.  The donation we received from the August Lueders family that I mentioned earlier includes this “jewelry” from their 50th wedding anniversary and is on display in our museum at this time.

Paul Lueders, one of the sons in the August Lueders family, was in the photography business.  I think it is highly likely that it was his camera that took the photograph of his own family.  He probably got his camera all set up for the shot, and had someone else press the button to take the picture.  I think there is also a good chance that Paul took the photo of his aunt, uncle, and cousins in the William Lueders photo.

Here is a close-up of Paul from the August Lueders photo.

I find the topic of comparing photographs quite interesting.  I’m sure there are other things which are similar or different about these two photos that you might notice.

It is not often that I go three days without posting a story on this blog.  The last few days have been very hectic, but also very exciting around the museum.  Yesterday we hosted three buses from the riverboat American Duchess.  Over 130 extra guests were here to be hosted.  We were able to tell them our story, feed them, and entertain them.  It was a pleasure to do so, but it was also quite a chore. 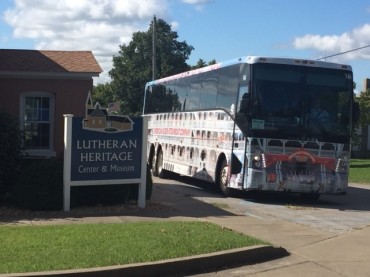 Even this post was thrown together quite quickly without much research.  Maybe things will get back to normal soon.

One thought on “A Tale of Two Photos”