Anna Marie (Mary) Mahnken is today’s birthday girl.  She was born on September 26, 1881 in Farrar, Missouri and baptized at Salem Lutheran Church.  This is her baptism record.

A little over a year later, a boy by the name of Johannes (John) Friedrich Theodore Bellmann was born in Altenburg.  John was born on December 4, 1882 and baptized at Trinity Lutheran Church.  This is his baptism record.

I am a much bigger fan of the pastor that wrote the Salem, Farrar records in those days than the one who wrote the Trinity, Altenburg records.  John was the son of Heinrich and Engel (Wichern) Bellmann.  I was not able to find a photo of Mary Mahnken, but I do have one of John Bellmann.  He is included in this photo of the Heinrich and Engel Bellmann family.

I am not 100% sure of the identification of the people in this photo, however I do have one idea.  There are six children in the photo if you include the oval photo in the upper left corner.  It is possible that the oval photo is the oldest child who ended up living in Indiana.  All of the others lived fairly near Altenburg, and they would possibly be lined up oldest to youngest from left to right (also from right to left).  I happen to think it’s from left to right, and if so, then John would be the last man standing to the right.  I have already written a story on this blog about John’s brother, Martin Bellmann, titled Pound the Hammer, Ring the Bell, Bang the Drum.  Here is a photo of Martin, and I believe he is the first man standing on the left.

Somehow a young man from Altenburg got matched up with a young girl from Farrar and were married in 1905 at Salem Lutheran Church.  Their marriage date was November 2, 1905.  This is the marriage record from Salem.

There are nine children listed in our German Family Tree for this Bellmann couple.  Three of them died very early.  John had a farm very near the Perry/Cape Girardeau County border, which is also the Apple Creek.  We see his land in this map from 1915.

I only found one other photograph that includes John Bellmann, and that is a photo of the Altenburg Band.   It has been published on this blog before, and I will include it once again with the complete identification of the people in it. 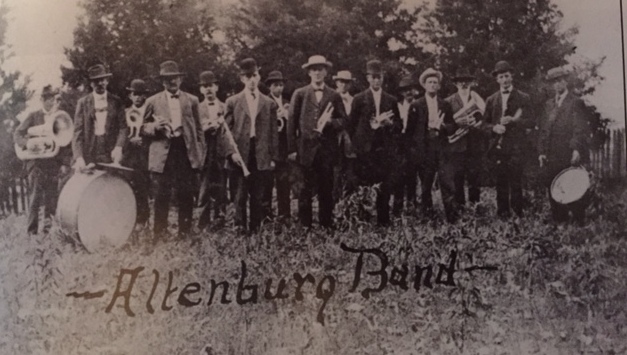 John is peeking through the shoulders of the band director, Teacher Fiehler and Martin Seibel.  I cannot tell what instrument John played, but the folks in the back row all seem to have some of the larger horns.  John’s brother, Martin is the bass drum player.  The men in this photo are all dressed nicely, but they are not wearing uniforms.  And I love the fact that they are all wearing hats, also not uniform.

John died in 1949; Mary died in 1953.  They are both buried in the Trinity Lutheran Cemetery in Altenburg.  Here are their gravestones. 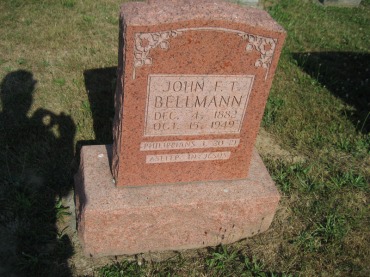 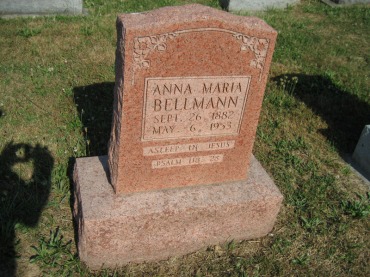 I am going to end this post with an appeal.  This story included the names Bellmann, Mahnken, Versemann, and Wichern.  I have written several posts with connections to these families before and am likely to do more in the future.  However, when I look in our collection of family history binders that have been donated to our research library, I do not find any with those names.  I got lucky today to find the photo of the Bellmann family in a large Wunderlich binder that includes some Wicherns.  We would love to have some family research for these families, especially ones full of family photographs.  I know I rely pretty heavily on finding photos for my blog posts in these family binders.  Your help would be greatly appreciated.

2 thoughts on “Band of Brothers”